Col. House's Version of the "Protocols" 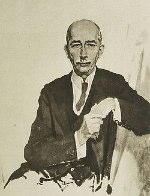 
Some time ago, Stan Monteith, a pioneer NWO researcher and broadcaster, found a typewritten copy of the "Protocols of the Elders of Zion" in the papers of Col. E.M. House at Yale University.

This seemed like confirmation of the widely held view that House (1858-1938) was a Rothschild agent. House was an "adviser" to Woodrow Wilson and FDR. It makes sense that he would have a copy of the Blueprint for the New World Order in his possession. He probably referred to it while writing his political manifesto, "Philip Dru Administrator." (1912)

The 99-page House typescript is a different English translation from the Victor Marsden translation, which is most commonly used. (I suspect "The Protocols" were originally written in French, originating in the Mizraim Lodge.)

So far, I have just compared the First Protocol (8 pages.) The most obvious difference is the title. Marsden's book is, "The Protocols of the Meetings of the Learned Elders of Zion."

The translation in House's possession is, "Protocols of the Meeting of the Zionist Men of Wisdom."  In this translation, "meeting" is singular and the "Elders" are clearly identified as "Zionists."  The significance is that "Zionist" used here is a movement for world domination, not one confined to establishing a Jewish homeland.

The second point of interest is a footnote in House's typescript that does not appear in the Marsden translation. In relation to "subjugating all governments to our super-government" there is an asterisk reference to "A.C. Shamakov, "International Secret Government" Moscow, 1912."

This book is hard to find. It was sold for $805 by Christie's auction house in 1994, along with a few other Russian examples of Judaica. Interestingly,
Shamakov was not a Communist Jewish Mason of the kind that studied the "Protocols."

On the contrary, House's version references a notorious "anti Semite" a man whose career was devoted to exposing the Illuminati Jewish conspiracy.

His real name was A.S. Shmakov and he was a lawyer, author and member of the Duma. He became famous when he volunteered to help the prosecution in the famous Mendel Beilis case in 1913, where a group of Kiev Jews was accused of the ritual killing of a youth, Andrey Jushinsky.

It is puzzling that House's version of the Protocols would reference an opponent, unless the translation originated with the opposition, and came into House's possession.

This interpretation is supported by another footnote on the first page explaining that "The Goys = THE GENTILES." If this version originated inside the lodge, they would not need this explanation.


MORE ON THE TRANSLATION

House's version is of great interest to scholars. Here are some examples from the first Protocol.

Marsden: "our watchword is force and make-believe."

Marsden: "their youth has grown stupid on classicism"

House: "their young people are insensible to ought else than classism and early vice."

Marsden: "by the law of nature, right lies in force"

House: "according to the law of being, right is might."

Marsden: "The doctrine of squaring accounts is precisely as strong as the means of which it makes use."

House: "A doctrine of self-interest is as potent as are methods employed by it."

The "Protocols" is the master plan of the New World Order, and the most read book after the Bible. But unlike the Bible, which it seeks to overthrow, there has been little attention paid to the nuances of meaning found in the different translations.

These nuances are significant, as the above examples suggest.

Comments for "Col. House's Version of the "Protocols" "

Marsden: "their youth has grown stupid on classicism"

House: "their young people are insensible to ought else than classism and early vice."

The Marsden version never made much sense to me, unless it was referring to a classical liberal education in the Greek and Roman classics, which still didn't make sense.

Classism, as in placing emphasis on social status, that makes sense. And what is today's classism based on? Fame, power, money, and sex.

The treasonous Col. House was the modern equivalent of Rahm Emmanuel.
It should be evident that the methodology of the "Protocols "of the Elders of ZIon is in play still and continues to incrementally evolve and encroach with the subtleness of glacier, and the one of us who have eyes to see, awaken like Rip Van Winkle, regaining our humanity and realizing our predicament.
As H. Ford said in 1921"The only statement I care to make about the 'protocols' is that they fit in with what is going on. They are sixteen years old, and they have fitted the world situation up to this time. THEY FIT IT NOW." That was 89 years ago ...and look at Detroit .
I think your article on Maurice Joly and Waters Flowing Eastward, by L. Fry, edited by Rev Fahey strongly demonstrate that- its the real "mccoy"
The question of authenticity , or who wrote it , at some point becomes almost a "chicken or the egg. "

The first American version of the Protocols was titled ""Protocols of the Meeting of the Zionist Men of Wisdom." It was published
in 1920 by Small, Maynard and Company. It's pretty cheap to buy on the used book market. I downloaded a free copy of the original 1920 book on the net but only had time to view it briefly and that translation looked different than the House and Marsden book.

I read the entire 99 pages of House's version slowly and carefully Henry. Your probably right about the Protocols first being written in French. I just haven't time to compare the two.

Thanks for the reference to ' "A.C. Shamakov, "International Secret Government" Moscow, 1912." I searched the internet far and wide and found nothing about him or his book. Expensive book.

On page 16 of House's Protocols version the author (speaker) mentions a few European politicians including:

Theobald von Bethmann-Hollweg who was born in 1856 and died 1921. According to Wikipedia:

"A June 1919 Associated Press report from Berlin refers to the former chancellor as "of Jewish descent,"[1] which is in fact wrong."

If House's version of the Protocols is correct then German Theobald von Bethmann-Hollweg was Jewish and was privy to secret information.

"The Government Soviet will support the power of the ruler: .....

The State Council has been, as it were, the emphatic expression of the authority of the ruler; ....

The Council of state will tend to accentuate the power of the ruler.

From reading the entire House version it appears that the protocols were read out over several days.