IS COUNTERINSURGENCY'S FUTURE IN AMERICA? 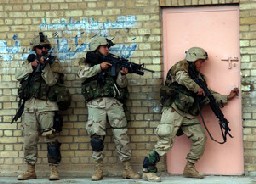 According to one report, which documents the "unraveling" of US society, "the demand for guns and ammunition has hit a record high and the gun industry cannot produce enough bullets to keep up with orders. American's are arming themselves to the teeth! In the past year, 100 new armed militia groups have been formed, as militia members have doubled in numbers. Federal authorities are gravely concerned about the "uptick in militia activities." One federal authority recently said, "All it's lacking is a spark. I think it's only a matter of time before you see threats and violence."

Contingency plans for martial law were signed by President Bush just before the election in November 2008. These plans, written in bureaucratic detail, have appeared on the Internet in what seems to be a leak of classified government documents. (US Domestic Control Measures.pdf by Bradley Moscrip)

Giving various reasons that would justify martial law (for example, "the refusal of the population to pay or unusual difficulty to collect rent, taxes, or loan payments"), the plans call for the suspension of the Constitution; the permanent confiscation of all firearms (while telling the gun owners that the confiscation is temporary); and the rounding up of large numbers of the "indigenous population" in detention camps.

Noting that there are presently 600 detention camps (soon to be expanded to 1500, generally in rural uninhabited areas), one of the documents provides the location of 94 of these detention sites in 28 states.

How reliable is this information? Are these documents real? Popular conservative gate-keepers like Glenn Beck have pooh-poohed stories about the construction of detention sites across the country.

There's no way to be certain, but to me they ring true. And skeptics who have personally researched the matter say there is no doubt that these detention camps exist.  The real question is why.

Some say it's simply that the government needs to be prepared to maintain civil order in case of enemy attack or civil emergency. But this doesn't account for the scope and secrecy of the present plans. The documents posted on the Internet state that the real reason is the prospect of domestic insurrection.

In principle there's nothing new here. The state's first priority has always been to control its own population, especially when it is carrying out unpopular policies. In the 1860s the Lincoln administration not only  crushed the southern states that tried to secede, it also crushed all dissent (and there was a lot of it) in the northern states.

Secretary of War Stanton ordered federal law officers to imprison anyone engaged by act, speech, or writing, in discouraging volunteer enlistments in the army. Habeas corpus was suspended; newspaper publishers, judges, and legislators who dissented from the war policy were jailed; and when a draft was instituted, hundreds of protesters were shot and killed.

The potential for these kinds of draconian actions is more real today than any time since the 1860s. Hardly a week goes by that the government is not announcing some new peril. At one time it's a pandemic (currently swine flu);  at another time it's a terrorist attack; at yet another time it's a financial collapse (recall that a Congressman revealed a year ago that Congress was threatened with the imposition of martial law if they should fail to approve the emergency bank bailout).

Current federal policies seem almost guaranteed to create some such crisis. The federal government is treating our current economic problems by creating monumental new levels of debt. This is like an alcoholic trying to cure himself by drinking even more whiskey. Once the temporary artificial stimulus has passed, the result will be an even greater collapse.

There is no shortage of scenarios that would lead to martial law, and many would be created by the policies of the government itself. Whatever the details, we may be confident that it has drawn up plans to suspend the Constitution "temporarily" and to impose direct military control of the civilian population. In both Waco and Katrina, US military forces were employed, though not publicized. More recently, the Pentagon has established the Northern Command, designed to carry out military operations within the US.

Yes, we may launch a "counter-insurgency strategy" in Afghanistan, at least  for a while. But America's power is waning overseas. We're overextended militarily and financially. We're looking for a way to scale back if not withdraw from Iraq and Afghanistan. (The new buzzword is "endgame.") Most significantly, Obama seems to be seeking to reduce American power and autonomy.

So the future for counter-insurgency may be here at home. The US government may be planning for a reduced role in the world, but it is not planning for a reduced role at home. On the contrary, it plans to take control of all aspects of American society, as well as integrate America into a global system. And it recognizes that these plans may lead to resistance. So it is ready with a counter-insurgency strategy, and willing and able to implement it. We would be well advised not to play into its hands.

-----
Rollin Stearns was a book and magazine editor before getting a law degree. He lives in Maine.

Comments for "IS COUNTERINSURGENCY'S FUTURE IN AMERICA?"

HENRY...COUNTERINSURGENCY CANNOT BE ACCOMPLISHED WITHOUT DEDICATED INFRASTRUCTURES. HAVE JUST RETURNED FROM THE AZORES TO FIND THAT ALL THE BRIDGES IN MY AREA ARE BEING REBUILT...EVEN ONES THAT ARE RELATIVELY NEW AND LOOK JUST GREAT. MY INSURANCE AGENT HAD ONE OF THE WORKERS COME INTO HER OFFICE FOR SOME KIND OF COVERAGE AND THEY GOT ON THE SUBJECT OF THE NEW BRIDGES.

THEY BOTH AGREED THAT THE PREVIOUS STRUCTURES WERE JUST FINE. I CONCLUDED THAT THE OBSCURE REASON MIGHT BE THAT A LARGE MILITARY CAMP, HOMELAND SECURITY AND SOMETHING CALLED "FEDERAL PROTECTIVE SERVICES", WHICH ARE ALL WEST OF THE BRIDGES MIGHT NEED TO CROSS THEM TO GET TO JACKSONVILLE AT SOME NOT TOO DISTANT DATE. EVERY TIME I CROSSED PATHS WITH A SOLDIER I WOULD ASK WHY PERFECTLY GOOD BRIDGES WERE BEING REBUILT. ONLY ONE SAID HE KNEW BUT COULDN'T TELL ME.

FINALLY, ONE OF MY CUSTOMERS, WHO HAD JUST RETIRED FROM THE ARMY, RELENTED AND INFORMED ME THAT THE CORPS OF ENGINEERS HAD DETERMINED THAT NONE OF THE BRIDGES AND OVERPASSES WERE RATED TO CARRY A FULL MILITARY COLUMN OF APC'S, M1 TANKS, ARMADILLOS (V BOTTOMED APC'S), SUPPLY TRUCKS AND HUMMERS ETC. WHAT WITH THE SCARY BUILDUP OF HOMELAND SECURITY FACILITIES AT CECIL FIELD AND THE VASTLY INCREASED COMPLIMENT OF TROOPS AT CAMP BLANDING WE ARE PROBABLY SOON TO FIND OUT JUST HOW COMPLETELY THE POSSE COMITATUS PROTECTIONS HAVE BEEN RESCINDED.

METHINKS WACO, RUBY RIDGE, KATRINA AND KENT STATE WERE LIGHT PRACTICE FOR WHAT IS COMING...I AM CHECKING TO SEE IF SIMILAR RUSH JOBS ON OTHER FACILITIES AROUND THE NATION ARE BEING COMPLETED. BEST GUESS: ABSOLUTELY!!...I AGRFEE WITH BETTY DAVIS WHEN SHE SAID "...BETTER FASTEN YOUR SEAT BELTS...

A well written essay by Rollin Stearns. The only thing I would add is that the â€˜counter-insurgency strategyâ€™ in Afghanistan is using an increasing number of foreign nationals, encouraged to enlist with promises of citizenship. It is a fifth column training ground for enforcing martial law against American citizens.

On your latest article is ringing a bell that a saw recently on http://www.cnn.com/video/#/video/us/2009/11/18/am.acosta.militia.oathkeepers.cnn

Through mass indoctrination like CNN the NWO will crush anyone and any organization that is exposing their agenda. It is pathetic how they (NWO) want to discredit The Fall Of The Republic by Alex Jones. Nevertheless it is up to us and us alone to share our information with the rest of the public. Thanks to site's like yours that our voices will not go in vain.

P.S. I read in a Romanian article that the American Army and other Armies around the world (mostly Eastern Europe) are doubling the garlic and onion ration for their soldiers. I told my wife since spring that and about vitamin C and D. Now i read it on the news.