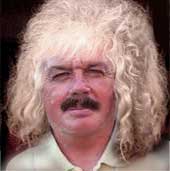 Perhaps the only "truth teller/freedom fighter" with greater worldwide fame than Alex Jones and Ron Paul, is David Icke.

Evidence that Jones and Paul are Masons, is discussed in this article, but can we "connect the dots" for Mr Icke?

Icke's first two books were based on Theosophy/satanism. Discussion of this, and the documentary "David Icke Debunked", is banned in Icke's "truth" forum.

His later book covers are full of masonic/satanic icons. All-Seeing Eyes abound, as does the sun, plus many more cryptic images. 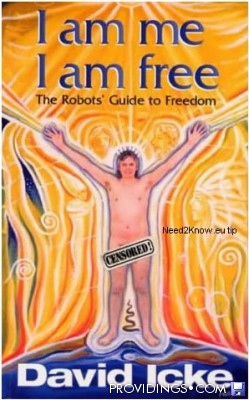 Looking at the cover of "I Am Me I Am Free", we see David being advised by "spirits", including Osiris. Osiris, and the serpents below, are both associated with Lucifer.

On the same cover, Icke is shown receiving energy from, and being illuminated by, the sun, with the energy flowing out through his hands.

Masons believe that an Initiate receives knowledge/illumination from the sun god Lucifer, until finally, "the seething energies of Lucifer are in his hands".

Look more closely, and you will notice three stylized/hidden sixes, and two balls with a cane, on Icke's left. The former produces 666, and Masons use the latter as a cryptic reference to Tubal Cain/Vulcan, another blood-thirsty sun god.

Also on this cover, Icke seems to make the Masonic m sign with his right hand. This hand sign requires conscious effort to produce. It is clearer on Icke's DVD covers:- 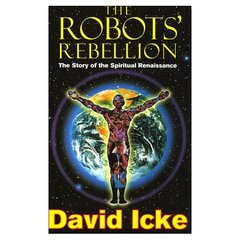 In the title Icke emphasizes that he is "Free". Free from the constraints of morality, like Luciferians in general?

Both of Icke's "Robot books", have a man in a pose which resembles an inverted C.N.D. symbol, on the cover. This may be yet another reference to Lucifer:-

Returning to Osiris as Lucifer, this key Egyptian/masonic deity is known as the Green Man in English. Icke appears as a green man at the top of his website.
http://www.davidicke.com/

Look closely the largest green man on top of the globe, which itself is turning green. He has lump on top of his head, like a miniature crown of Osiris.

Icke is one of many "Truth Non-Movement" leaders, who appear to be closet Freemasons.

What is the function of such characters? To drip-feed information, and provide apparent leadership, until the global control grid can be completed, I believe.

How and when will western nations be coerced into accepting a Big Brother society?

Americans are still heavily armed, so a massive false flag attack would be "useful" to reduce resistance. This may be the plan:-

Related -The Satanic Salutes of Ron Paul and Alex Jones

I'm glad you've fallen out with David Icke—He's bullshitter of the worst kind anyway. You're better off without him...

Hides lies between two truths as all the best LIARS do.

I see his book cover has the 3 swirls of 666....and is that a serpent at his feet,between his legs !? He just can't help himself...with his demonic possessin... because he dosn't believe in Christ, as He should be believed in !.

I mean this guys even got the WITHERED HAND !!!! [for his false doctrines of demons]

Keep up the good work.

At first I thought Icke used the "reptilian" trick to protect himself from "antisemite" etc. denigrating labels by the elites.

Two fewer 'soldiers for Thruth' on my list...
BTW, everybody should read Stone's report from his near-death experience witha Jewish community:
http://www.jimstonefreelance.com/index1.html
I understand Jim is finally safe at an undisclosed place.

Hello Dr. Makow:
I saw your timely article on David Icke. Icke snows more folks than Rense does. I have watched a few of his videos and they are pure indoctrination. I'm surprised more people don't recognize that. Of course him claiming to be the "son of god" always threw up a MAJOR red flag for me, as it should for anyone.

David Icke is not the only theosophist and Freemasons Rense links to. I'm sure by now you are aware that Les Visible admitted he's a Rosicrucian and Freemason. Half his blogs about been trying to push theosophy (Luciferianism) and his a liar and fake of the utmost kind. He admits he's a Freemason and yet he blames "Jews" for EVERYTHING. (while saying freemasonry is apparently "not evil" and WHOLESOME ???!!! THEY ARE EITHER LIARS OR BLIND AND DEAF AND PURPOSEFULLY IGNORANT. I have laid these facts out to all of them, repeatedly.)

Yes, sir he ADMITTED he's a mason, and RENSE OFFERED HIM A SPOT ON HIS RADIO NETWORK IMMEDIATELY, and I have sent hundreds of emails reminding him. I've held off calling him at home for now, saving that for a rainy day!)

There are MANY in the truth movement who don't see masons as a threat or evil because Rense stopped mentioning them, kicked you off the site, WRH doesn't talk about them. RMN, probably AT LEAST 20% of their posters are masons or golden dawn or Job's daughters or whatever. They push new age and theosophy constantly, and it doesn't matter how much you try to educate these people about masons, they forget 5 minutes later (plus hell they ARE part of the CONSPIRACY - what do you think the BIG SECRET IS THEY KILL THEIR OWN FOR EVEN WHISPERING), and THE BRITISH PRESS admitted Queen Elizabeth 2 is the HEAD OF INTERNATIONAL FREEMASONRY, as she is the head of the order of the garter, the inner "sanctum" of the Committee of 300. The article was when they put GEORGE H.W BUSH (connected to the Nazis, the JFK assassination, Vietnam, RFK Assassination, Watergate, Iran_contra, Franklin pedophile scandal,
Johnny Gosch, satanic sacrifices of innocent children, the Reagan
assassination attempt, Bill Clinton, Barack Obama ((both masons
also, Clinton was a RHODES SCHOLAR as in Cecil Rhodes whose GOAL WAS TO BRING THE USA BACK UNDER BRITISH RULE))both gulf wars, 911, and God knows what else) - yes they put BUSH 41 in the order of the garter and admitted that rat queen is the head of millions and millions of lying murdering masons worldwide.

Yet nobody gives a shit. It's disappointing, really. And people like Rense, Icke and Les Visible IGNORE that the Queen pretends to be Jewish herself, and blow off the BIG conspiracy in favor of a IMAGINARY ONE ("Zionism" just another tool like COMMUNISM)