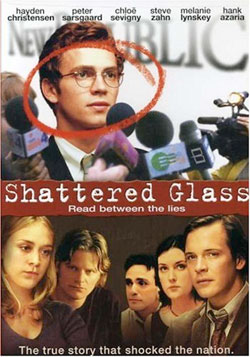 A hidden hand is pushing minorities to the fore.
But when minorities screw up; suddenly their minority status is airbrushed and they belong to the majority.
by Henry Makow Ph.D.
(from Aug. 2009)
Imagine a movie based on the true story of a reporter who invented his feature stories but passed them off as true.

Imagine he scammed a half-dozen magazines that took themselves very seriously, like The New Republic, The New Yorker and Rolling Stone.

Would the reporter's religious background and sexual orientation be pertinent to understanding his actions?
What if this con artist were a WASP heterosexual from the Midwest but they portrayed him as a Jewish homosexual? In a movie about basic honesty, would that be honest? Wouldn't that suggest prejudice?

"Shattered Glass," (2003), is based on the hoaxer Stephen Glass,a Jewish homosexual who wrote for The New Republic in the mid 90's.

He is portrayed as a Midwest WASP heterosexual by actor, Hayden Christensen.

We live in an era of "identity politics."  Obama is the first "Black" President. His Administration has many homosexuals. Sonia Sottomayer is the first "Latina" Supreme Court Judge. (Actually she is a Jewish lesbian.) A hidden hand is pushing minorities to the fore.
But when minorities screw up; oh well, suddenly their minority status is airbrushed and they belong to the majority.

Minorities are good; the heterosexual WASP majority is bad.

The movie goes out of its way to portray this gay reporter as a heterosexual. The women on the New Republic staff swoon over him. In one scene, he remarks that he must stop complimenting females on their accessories or they will think he is gay.

The Glass character comes from the Highland Park area of Chicago. Although this is a Jewish enclave, it is portrayed as an old WASP neighbourhood.  There are recurring scenes where Glass is lecturing a journalism class at his old high school. The worshipful girl students, the doting teacher, the prominent American flag, are all distinctly Gentile.

However the movie dropped one clue that raised my suspicions. Glass says he has to attend law school because "where I come from, you're nobody unless you're a doctor or a lawyer." That sounded very familiar so I watched an extensive interview with Glass from "Sixty Minutes" and sure enough...not only is he Jewish but he is also gay.

WHY IS THIS IMPORTANT? 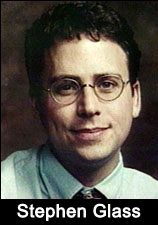 Because the movie refuses to acknowledge Glass's real identity, it doesn't go beyond relating how his hoax unravelled. There is no probing of his character and motives. As a result, the movie is  half-as-good as it should be.

Glass's "minority" identity may explain why his ruse wasn't discovered earlier; why he was a "star"; and why he was "protected" for so long by colleagues and editors.

America is about half-as-good as it should be because it can't confront other Jewish or gay whoppers for fear of being politically incorrect. For example, Larry Silverstein should be asked why World Trade Centre Building Seven just happened to be wired for demolition on Sept. 11, 2001, and was demolished, but the twin towers weren't?

A gay activist whopper that has the potential to destroy millions of lives is the notion that homosexuality is a normal lifestyle choice and not a developmental disorder.

I believe that the majority of Jews like myself and gays are honest and decent people. But if we remain silent about the subversive activities of certain Jewish or gay figures, we implicate ourselves.

Prejudice is another word for experience. We can't help but notice that a disproportionate share of the world's liars are either gay or Jewish or both.  The reasons for this are complex. It may have something to do with both groups feeling unjustly excluded from society and believing  therefore anything goes.

In "After The Ball: How America Will Conquer Its hatred & Fear of Gays in the 90's,"  gay activists Marshall Kirk and Hunter Madsen say, "a surprisingly high percentage" of pathological liars and con men are gay. This results from a natural habit of self-concealment, and leads to a stubborn self-deception about one's own gayness and its implication." (pp. 276 ff)

The Jewish proclivity to lie may have something to do with a Cabalistic belief that reality can be socially defined. The lack of belief in the immortality of the soul may be another factor. This is a complex issue.

The more Hollywood portrays Jewish or gay behaviour as if it were American mainstream  behaviour, the sooner it will be.

I have never seen Christianity portrayed in a truly favorable light in a Hollywood movie. Only once have I seen a Jew portrayed in an negative light. (In "The Upside of Anger" (2005) a Jewish radio producer is exploiting a young woman sexually. ) I can't remember seeing a homosexual portrayed negatively. No group is perfect, not even "a persecuted minority."

Millions of heterosexual women have modelled themselves on the four gals in "Sex and the City." The show was created by gay Jew Darren Starr, and the girls act like male homosexuals.

Americans have been under psychological attack for some time.  Political correctness is a trick. The worst Jews and gays are being used by the Illuminati to corrupt society. The best Jews and gays cannot remain silent. Nor can anyone else.

Dear Henry, Hi. I knew Glasses Dad very well. Close, close friend. Jeff was for ever trying to be a waspy guy. Mommy dearest was a crazy crazy chick who worked psych as an RN when the income was not needed. Younger Glass had a Mom who spent every moment psycho analysing her kid. Jeff was so abhorrently trying to be anything but Russian Jew. Which means he would be anything but a straight male.He probably cried over driving Miss Daisy.

I have been following your site for a couple of years now and use it as a source of knowledge to forearm myself and family for the upcoming, biblical prophetic tribulation. Knowledge is power and responsibility comes with it.

I started to notice, in many tv commercials, how the white male would inevitably be portrayed as some dimwit, to be "straighten out" by some minority or female in the commercial. I didn't make a list, sorry I didn't now, but an example that comes to mind was a pudgy white guy that had to submit expense reports to his black boss, and offered to "photo copy his butt" for submittal because he had lost the receipt for his fatty hamburger lunch receipt. (Maybe a Subway sandwich commercial?)

In fact, the white male actor turned and showed his fatty backside to the black boss, who replied "hoochi momma" and stated he would accept a photocopy in lieu of a receipt. The white guy then went and sat on photocopier, and broke it.

There were many of these type tv commercials leading up to the election, and now I see it being not so prominent. By "many" I mean enough to have caught my attention, and cause me to wonder WTF is up with this?

I am starting to think the Zionist-controlled media, in cahoots with the CFR that picks "our" presidential candidates, were working together to make a black candidate look more competent than a white one. Planting that subconscience "seed" in our sorrily educated masses?

Henry you are an example for Jews to follow, any time someone calls me an anti-Semite I remember you and know I´d prefer to have a Jew like you on my side in this struggle before many Hypocritical gentiles. Keep preaching goodness to others and keep spreading the knowledge about the immortality of the spirit. Ask for the inspiration of The True High God so his pervading Spirit will be with you on this battle. When you live in truth you vibrate to truth, and I feel truth coming from you.

Evil is not something we are inherently born with, nor it has any relation to one´s racial background. Evil is something that is taught to people by the doctrines of deceit and self gratification, the distortions of the true light of The Eternal God. Maybe some individuals have more natural inclination towards evil than others, but everyone has the choice to choose a side on this struggle. The weapons for goodness are the Light of the spirit and the power of the true knowledge, some people have more knowledge about how to handle these weapons, with greater knowledge comes greater responsibility. But those who choose to fulfill God´s plan on earth with all the pain this entails, will have the glorious reward in His kingdom of the spirit.

So let The Eternal Creator give us strength to carry on his dictates here on earth.

Henry, totally enjoyed your "airbrush" article today, I have been revolted by MSM jew hollywood garbage for quite sometime. Thought maybe you could give me some advice. Although I disconnected from mainstream media about 5 or 6 years ago and started on my path to awakening (thanks to help from people like you and Jeff Rense etc) my wife is hopelessly a sheep and deeply brainwashed by the matrix.

I attempt to gently bring her over to the truth and break her addiction to the television but to no avail. I believe in loyalty and I do love her but is starting to feel like I live with an idiot. Have you heard this complaint much? any thoughts? thanks for your time.

Don't make it an issue. We can't blame people for being deceived on this scale. Treat your differences lightly and humorously. From time to time, suggest she watch a video like "Loose Change" or "Obama Deception" with you. Eventually she will come around. We have to love people for what's in their heart, not what they think at a given moment.

Who becomes the best musician or athlete?The one who starts practising while very young. [Many] politicians are gay because to become a politician one needs to be pathological liar.

The same is applied to actors,all without exception are gay or closet homos.

Actors have to convincingly pretend feeling sad on the best days of their lives or feeling joyful while their lives may be falling apart,acting and lying are synonymous.Yet we are trained to call them "icons"; this is an abomination and a blasphemy.

The explanation of this lies in the fact that in order to fit in the society homosexuals must pretend to have the feelings they don`t have (being attracted to the opposite sex) and conceal the feelings they really have (being attracted to the same sex).Their lives are non-stop 24/7 lies. By the time they finish high school they are virtuoso-level liars.

Here is your ultimate answer to politics, power and criminality.