Does the Devil Own all these Companies ??? 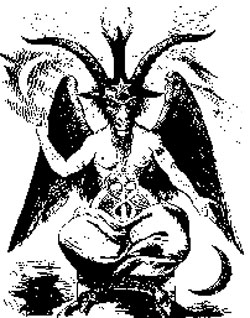 Left, Baphomet -Notice the crescent moon down at the right corner

A reader, DD, wrote: "Please notice that all corporate logos now have the crescent half moon sickle. For example Bud Light ,AOL, Capital One, Minuteman Press, Weight watchers, Comcast , Ryder Trucking, Newport cigarettes, Sandisk, Washington Wizards and plenty more -- too many to be a coincidence. With all copyrights laws etc. why are they all using the crescent half-moon? Do Freemasons own them? "

The crescent moon is an occult symbol that predates Islam.

Comments for "Does the Devil Own all these Companies ???"

In fact most of them are not really half moon symbols, though that is one general interpretation. What they are even more is the RINGS OF SATURN.

That is why they're a "swoosh" as one commenter mentioned. If you view them all from a 3D point of view, then you'll see that they're ALL rings of Saturn, which is another MAJOR symbol for Satan.

Sometimes they look just like they're circling the name. Other times it's clearly a ring around the name of the logo itself as you can clearly see from the Newsday, Veeco and Capital one logos.

I've been cataloging these for several years now. Some others on the list include;

People should watch Subversive Use of Sacred symbolism in the Media 1/10 -Michael Tsarion
http://www.youtube.com/watch?v=Wwm3gxKy4HA

Yup, only the Pajama People (or trolls) would accuse you of misinterpretation and over-reaching. These are Masonic, Satanic/Illuminated symbols and they're BLATANT about it. The INFINITY
sign (figure eight) laying on its side or upright is another commonly seen symbol in TV and in print. Fritz Springmeier pointed that out in his books in the late 1990s.

As a graphic designer, I thought I'd weigh in. While a few of these logos probably do have occult implications (AOL, Corona), others
just use swooshes to imply motion and to isolate a mark (the "graphic" part of the logo) from the type. For example, Serta mattresses or Minuteman Press are likely not run by the illuminati.

In both cases the crescent form just draws attention to the mark, sets it apart and makes it more attractive. Or Cooper Tires – the
crescent is a C and looks like a spinning wheel.

The truly occult logos would go from old ones like royal coats of arms, symbols and flags (ie the City of London coat of arms, the
Winged Lion of St. Mark, the Jesuit logo, the flag of Israel) down to global corporations like Starbucks (fish goddess), Chase Bank
(swastika), WalMart (5-pointed star), media companies (Columbia, CBS), etc.

Then there are a number of clearly "masonic" logos, mottos, etc. that are relics of the early 20th century, when masonry was much more mainstream. Examples include Rolling Rock beer ("33"), Ball "Perfect Mason" glass jars, etc.

Clearly the mason jars were named by a mason – but the Ball jar company doesn't exert any power.

Once you get to the level of something like Serta mattresses, and certainly at the level of a local basketball league, you're probably looking at uninformed derivative symbolism at worst, or
you're overanalyzing. I've certainly designed a number of what could be analyzed as "occult" logos for clients without intending
to do so.

Check out the book "Marks of Excellence" for a good overview of the history of logo design, and a sense of why these symbols and shapes keep popping up, from a purely formal perspective.

In regard to the article on crescent symbols. They have been increasing for quite a while. In some case, it is a crescent moon. In some cases, it is a representation of the sun coming over the horizon (rising of the light-giver, etc.) Even the Liberal party of Canada under Paul Martin had it just beneath the maple leaf. It was taken out after he left. Martin was known for such symbolism but I am not sure why the present crew backed away from it.

Between crescents/various rising suns (including red circles), triangles/pyramids/inverted V's/diamonds-cubes (i.e combination of pyramid and inverted pyramid), eyes/swirls, stars/comets, cryptic 6's, 11's and 13's, you will have covered a solid majority of corporate logos out there. It even goes down to the level of mid size businesses. There are also a few with various birds representing a phoenix. There is no way all that is an accident. All of it is occult/masonic/egyptian/babylonian. I have casually built a large file of it over the years.

I've look at this too through Jordan Maxwell's work. I think you are drawing too much in the form of conclusions from this. Anything that looks like an arc is considered a moon, etc.

We must work from fact only, we have enough of these. We do not need to draw subjective conclusions and form hypothesis that can never be proven.

I disagree. I think these logos are Masonic in character.