Under construction, Canada's new $880 million electronic spy HQ in Ottawa, which will spy on Americans and the whole world.

Assume that all your communications are being monitored and we live in a disguised police state already.

THIS IS EXACTLY THE WAY THIS ARTICLE APPEARED MARCH 24, 2012 . IF YOU UNDERSTAND THE BIG PICTURE,  THE PIECES WILL FALL INTO PLACE, AND REVELATIONS LIKE EDWARD SNOWDEN'S WILL NOT SURPRISE YOU.

MANKIND IS BEING ENSLAVED BY THE ILLUMINATI CENTRAL BANKING CARTEL IN ORDER TO PROTECT THEIR MONOPOLY ON CREDIT CREATION.  MOST OF OUR POLITICAL, ECONOMIC AND CULTURAL "LEADERS" CONSTITUTE A COLONIAL ELITE THAT SERVES THE BANKERS' SATANIC AGENDA. "TERROR' IS MANUFACTURED AS A PRETEXT TO BUILD THIS POLICE STATE.

THE CHARADE MUST END.  SOCIETY IS IN DENIAL, AN ACCOMPLICE TO ITS OWN ENSLAVEMENT. THE TURKEY THINKS HE WILL BE A GUEST AT THE FEAST.

THIS SURVEILLANCE IS A DAGGER IN THE HEART OF FREEDOM. AMONG OTHER THINGS, IT IDENTIFIES ANYONE WHO OPPOSES ANY ASPECT OF THE "NEW WORLD ORDER." IT IS EQUIVALENT TO SEEING HOW WE VOTED, BUT WORSE. IT IS READING OUR MINDS. PEOPLE MAY LOSE THEIR JOBS OR BE DENIED PROMOTIONS.

AT BEST, IT PUTS A CHILL ON ANY KIND OF POLITICAL ACTION. AT WORST. THE CENTRAL BANKERS WERE BEHIND BOLSHEVISM AND MIGHT USE THE SAME TERROR TACTICS AND CONCENTRATION CAMPS HERE. ALREADY THE MILITARY IS BEING INDOCTRINATED TO SEE "CHRISTIANS" AND "PATRIOTS" AS TERRORISTS.

THEY ARE NOT PROTECTING US. THEY ARE ENSLAVING US AND PROTECTING THEMSELVES.


Canadians were outraged in February when the government introduced Bill C-30  allowing police to monitor email traffic "in order to protect children from Internet predators."

Vic Toews, Canada's "Minister of Public Safety," a title originating in the Judeo Masonic French Revolution, caused a firestorm when he said his opponents were "siding with child pornographers."

The backlash took the form of a Twitter campaign in which the nasty details of Toews' affair with a babysitter and subsequent divorce were exposed.

The Tory government, ever mindful of its popularity, has since backed off.

But the controversy was irrelevant since all domestic communications -- phone, email, faxes, mail -- probably have been monitored for a very long time, even though it is against the law.

In fact, Canadians are now spending $880 million dollars to build a new Communications Security Establishment of Canada complex (CSEC) in Ottawa so Big Brother can track their pizza preferences.

Technically, the CSEC is forbidden by law from domestic spying.

But Canada is a member of "Echelon" a five-nation (US,UK,NZ, Canada,Oz) spy consortium which, according to Wikipedia, is "capable of interception of telephone calls, fax, e-mail and other data traffic globally..."

In other words, if necessary, we can spy on Americans and they can spy on us, and exchange the information. The US and UK have been doing this for years.

Are we supposed to believe this complex, as big as the whole Dept. of National Defense HQ,  will be confined to signals intelligence and computer security as proclaimed?   (Comparison - Canada's Defense Budget, about $23 B; CSEC budget $300 million.)

Hardly. It is a part of new infrastructure designed to enforce a world police state. 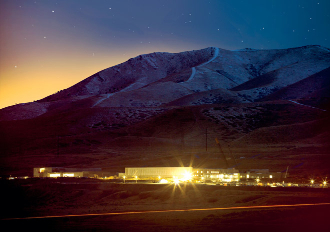 "Its purpose: to intercept, decipher, analyze, and store vast swaths of the world's communications as they zap down from satellites and zip through the underground and undersea cables of international, foreign, and domestic networks...  stored in near-bottomless databases will be all forms of communication, including the complete contents of private emails, cell phone calls, and Google searches, as well as all sorts of personal data trails--parking receipts, travel itineraries, bookstore purchases, and other digital "pocket litter."

You can assume that this has already taken place.

Returning to Canada, according to the Globe and Mail, "the seven-building CSEC complex will be the equivalent of a 90-storey skyscraper turned on its side - a highly secure compound outfitted with the latest high-tech gear. Two nearby electrical generating stations will power the agency's computers, which suck in millions of conversations from around the world each day and scour them for intelligence information. CSEC's 1,700 staff and $300-million budget are double what they were a decade ago."

According to another source, "the organization has spent most of its history since 1945 essentially as a branch plant of American signals intelligence (the National Security Agency). The government did not acknowledge its existence until the 1970s, and it operated wholly outside Parliamentary law until an enabling act was finally passed in 2001."

The new 20-acre complex is adjacent to CSIS, Canada's CIA, and will be connected by a sky walk. Essentially, we are paying for our own enslavement.


What passes for democracy in the West reminds me of high school. We elect the Student Council which organizes the Prom and publishes the Yearbook. But the important decisions are made by the Principal and Dept of Education.

The same applies to our government where the central bankers call the shots through their corporate and other fronts. Our legislators are highly paid actors who provide an ersatz democracy. The media legitimizes this sham.

For example, for the past two weeks the "robo-call scandal" has dominated political discourse in Canada.

Just as the predator email bill offended our fine democratic sensibilities, during the last election some 30,000 calls were made harassing people or directing them to the wrong polling station. The media has been full of this scandal. Democracy has been attacked!

Meanwhile, the real government has been secretly erasing the Canada-US border and integrating us into a North American Union, without any meaningful political debate or media attention.


The perimeter security initiative between Canada and the U.S. will integrate Canadian and American law enforcement. Given the recent US law suspending civil rights,  (HR 1540 N.D.A.A.) this is downright scary! Where is democracy when it matters?

Rather than address substantive issues, our student politicians are presenting an illusion of democracy.

As The Protocols of the Elders of Zion state,  "For the peoples of the world ...  are ... only children under age, precisely as are also their governments." (15-20)

If we don't care about freedom, how about money? A prelude to taking away our property is taking away our power. The Illuminati do not intend to buy our acquiescence forever. Far too expensive.

These domestic spying measures are designed for a future day after financial collapse, war or martial law.

In the meantime, the sheep continue to graze while the abattoir is built at their expense in plain sight. Accomplices in their own enslavement, they hope their masters will be merciful. It's easier to bury their heads than make their masters accountable.

U.S. Resurrects Shuttered Bush Administration 'Total Information Awareness' Data Mining Program --U.S. Relaxes Limits on Use of Data in Terror Analysis 23 Mar 2012 The Obama administration is moving to relax restrictions on how counterterrorism analysts may retrieve, store and search information about Americans gathered by government agencies for purposes other than national security threats. Attorney General Eric H. Holder Jr. on Thursday signed new guidelines for the National Counterterrorism Center, which was created in 2004 to foster intelligence sharing and serve as a terrorism threat clearinghouse. The guidelines will lengthen to five years - from 180 days - the amount of time the center can retain private information about Americans when there is no suspicion that they are tied to terrorism, intelligence officials said. The guidelines are also expected to result in the center making more copies of entire databases and "data mining them" using complex algorithms to search for patterns that could indicate a threat.

Sarkozy: Jail those who browse terror websites --'Anyone' who regularly consults terror-advocating sites will be criminally punished 22 Mar 2012 France's president proposed a sweeping new law Thursday that would jail those who visit extremist web sites -- one of several tough new measures floated in the wake of a murderous shooting spree. Nicolas Sarkozy argued that it was time to treat those who browse extremist websites the same way as those who consume child pornography. "Anyone who regularly consults Internet sites which promote terror or hatred or violence will be sentenced to prison," he told a campaign rally in Strasbourg, in eastern France. "What is possible for pedophiles should be possible for trainee terrorists and their supporters, too."

Don't you know that the PTB are listening/reading your all communications to PROTECT your children & to make you SAFE!
Anyway it's all for a GOOD CAUSE!
As I was told by a avid TV watcher, if you have NOTHING to HIDE, you shouldn't be concerned, after all the GOVERNMENT is caring & concerned as well as looking after you!

The question isn't - what have we to hide? The question is, what is the government hiding (or planning)that makes it fear the general public?

When an expenditure such as this is incurred, it has to be periodically justified, which of course is a powerful incentive to sustain the appearance of a serious "threat level". This is elementary bureaucratism. Evidently the "war on terror" is slated for dramatic expansion and a long run, and is certain to cast an ever wider net in society.

Canadians ought to understand what Vic Toews was really implying when he said in the House that the choice was either to support Bill C-30 or to stand with child pornographers. He plainly meant that not favouring the bill amounted to supporting the evil it was intended to combat.

But the bill is not specifically about child pornography, but something much worse: its title is "The Protecting
Children from Internet Predators Act"--which is an indication of the utter contempt with which this "Minister of Public Safety" actually regards the Canadian public, four-fifths of whose twitter traffic was against Bill C-30.

Most of it is just to create waste, drive us further into debt quicker, and keep the "educated" classes "busy". Other than that, the microphones may as well be buried to listen to the dead. What is scary is the praetorian classes taking "I'll have extra mushrooms and cheese" completely out of context like some old Get Smart episode.

Susan [below] is spot on about NZ. Tama Iti and his band of merry men (and women ) were certainly playing their part to "help" the Government pass the laws they already had prepared.
It wasn't too long ago the tattoo-faced 'activist' was using a shotgun to blow holes in our national flag on national television. Whilst 'whiter elements' of discontent were being prosecuted for sedition for sticking a knife in the wall of the office of the (dis)honourable Helen Clark, the NZ Govt were extremely concerned with Tama's behaviour and so they made him a International Representative of NZ.

That's right. He got paid to travel at taxpayer's expense to try and convince the world he represented NZ. Because he used a shotgun to blow holes in the NZ Govt's flag

Accepting payment from "the Crown" = 'paid agent of the Crown'.

As a background article your readers should read here:

Practical Steps:
1. Use http://duckduckgo.com as a search engine instead of google, yahoo, etc.
2.Install and use Tor (modified Firefox) as their browser
https://www.torproject.org/

3.Do not use social networking sites such as Facebook which is mass surveillance:

4. Consider using encrypted email (drawback, does not work with web based mail such as gmail).

5. Hand written fax is the most private.

Henry! why are you complaining about the so called spying of the government on the people of Canada??

You know that the Canadian people have "rights" lot of rights. Don't know about your freedom!

Here in nz, just the other night, laws were passed by our Zionist-loving Jewish prime minister that now makes it legal for more than 70 government agencies to spy on the citizenry without their knowledge. the sheep do indeed sit by idly, chewing the cud, whilst their slaughter house is erected under their very noses.

And no one does lamb better than NZ!