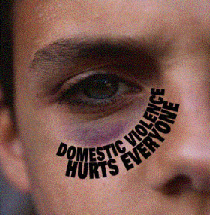 Just as the Illuminati bankers enlisted workers,
Blacks and Jews to do their bidding,
they used feminism to harness the political power
of women who couldn't get a date on Saturday night.

The same applies to domestic violence. Even though women initiate violence against men in almost equal numbers, most of the publicity is devoted to women as victims.

This is because feminist activists, funded and empowered by Rockefeller social engineers, want to stigmatize men and marriage in the eyes of young women. They want young women to Eat at Lesbian Jill's or Single Jane's but definitely not at Joe's. This is how mass behavior modification works.

Just as the Illuminati banksters enlisted workers, Blacks and Jews to do their bidding,they used feminism to harness the political power of women who couldn't get a date Saturday night.

The banksters gave them positions of power in government and media. So periodically we get a dose of propaganda about how domestic violence stalks married women.

I do not condone domestic violence of any kind. But I resent that this problem is exploited for an evil political agenda: to destroy marriage and family and so render us more vulnerable to totalitarian control.

In Canada for example, 646,000 men (6%) reported being  the victim of spousal violence at least once in the previous five years (compared to 654,000 women or 7%); yet absolutely nothing is done for them. There are 300 women's shelters and not one for men. When a man is being abused, he needs a place to go.

Feminist activists use domestic violence as a Symbol of Male Oppression. Violence perpetrated by women would blur this politically charged message.

Domestic violence by gays and lesbians also would blur this message. We never hear  that "Spousal violence was twice as common among homosexual couples compared to heterosexual couples. Fifteen percent of gay and lesbian relationships experienced violence." (Statistics Canada, Oct 2006)

This is because they want the homosexual "lifestyle alternative" to appear as attractive  as possible. Homosexuality is the inability to form a permanent bond with a member of the opposite sex due to confusion over gender identity. The goal of social engineers is to spread this disorder which results in arrested development to society at large.

Also, social engineers want homosexuals to have the glamor of being "victims" of straight violence.

In her excellent "Crafting Gay Bisexual Children" (p. 291) Judith Reisman cites  gay authors David Island and Patrick Latellier who estimate 650,000 gay men are battered by a partner every year. They estimate the rate of gay-on-gay violence is three times straight-on-gay intimidation or assault. They estimate 20% of gay relationships are poisoned by domestic violence."  ("Men Who Beat the Men Who Love Them")

Women who have been to a woman's shelter will tell you how callously they are treated by the hags employed there.  Distressed women are pressured to end their marriages, and are offered help and resources to do so. Feminists are not interested in the welfare of women. They rely on domestic violence for their cushy jobs and to emasculate men (by portraying them as abusers.)

The publicity given to male domestic violence,as opposed to the other equal or more prevalent kinds, illustrates how elite social engineers select information to shape mass perception and behavior according to the New World Order agenda.

-----
See also my "The Dawn of the Feminist Police State"

This column is indebted to   this article by "Real Women of Canada."

We never used to hear all this stuff about eating disorders, self-mutilation, etc. I think feminism is making women crazy.
http://www.timesonline.co.uk/tol/life_and_style/health/article4327233.ece

Today I saw a TV show in which modern actresses attempted to recreate World War II-era France. It was sad to see that the actresses were so defeminized that they couldn't pull it off - they are so used to dressing like men that they no longer look natural in skirts and dresses. We women have lost our souls.

I will proceed to critique your article.
Women may initiate violence towards men (or other
women)but more women's lives are taken by their
husbands or ex husbands, are you suggesting women
aggravate men?
I think that suggestion that feminists are frustrated
women(they don't get a date) is sexist and homophobic,
your view is hetero centred and this is damaging to
those who wish to live in a plural free educated
world.
I agree domestic violence is manipulated and is also
hetero centred, and family oriented,(what about sex
workers that get assaulted and abused? It is too taboo
to talk about them) but isn't all press stereotyped
and manipulated? I suggest we struggle against the
bias in the manipulation, not individuals in personal
ways.

I think the institutions of family and marriage are
totalitarian, the patriarchy lies in them, read The
Creation of Patriarchy by Gerda Lerna, how marriage
comes from slavery and male sexual control over women
(as a rather crude summary).
I also agree there should be shelters for men and also
would like to encourage men to get together to fight
for their rights too as women have done for so long
but without it being detrimental to women's causes.
Because feminism is not about falling into the easy
way of fighting men in a personal way (some so-called
femenists seem to have resorted to this out of
frustration) but fighting the system of male-power
dominance, its politics and institutions.This is a
totally different stance. And is in harmony with a
more equal action.

Though I do not always agree with some of the articles you write regarding feminism and NWO, I must admit, you have certainly made a very serious "point" in the article Domestic Violence Hysteria Political.

In the conclusion, you stated "Women who have been to a woman's shelter will tell you how callously they are treated by the hags employed there. Distressed women are pressured to end their marriages, and are offered help and resources to do so. Feminists are not interested in the welfare of women. They rely on domestic violence for cushy jobs and to emasculate men (by portraying them as abusers.)"

Yes, Mr. Makow women who go to domestic violence shelters are treated callously, to say the least. As a former counselor at a domestic violence shelter (safe house), I witnessed employees verbally and emotionally abusing clients. When I addressed the issue to the director of the shelter, she said and did nothing. I was so disgusted that I quit working at the shelter. I will go as far as to tell you that the name of the organization is "Women Aware" located in New Brunswick, New Jersey, and the Director is Jackie Marich. Unfortunately, at the moment, I don't recall the assistant director's name who ran the safe house. All I can say is that the assistant director verbally and emotionally abused clients who were already in distress, and she was not the only one abusing clients.

It is my hope that the public wake-up to the fact that domestic violence shelters are not the so-called "safe houses" they proclaim to be. Safe houses victimizes the abused in the name of politics. I have my own personal story regarding domestic violence shelters, but I won't go into at this point. However, I do know that the shelter I worked at does not have the best interest at heart for abused females.

Thanks for revealing a Truth.

I watched a trailer for "Fool's Gold" (starring Matthew McConaughey and Kate Hudson) with my wife. She asked me if I liked it or not. I told
her it looked like a fun story, except I couldn't get over one part that made me sick to my gut, and because of that I refuse to watch it. It
is when Kate slams Matthew over the head, and he falls to the ground in a heap. Was that supposed to be funny?

I took her through a thought experiment. I told her to imagine the roles reversed, and he had slammed her across the head, knocking her out
cold. Doesn't seem funny then, does it?

Well, it is NOT funny the way Hollywood is depicting it either. The sad thing is that a great number of people out there DO think its funny, otherwise a movie like this would not make it, would it?

You raise an important point. Hollywood is conditioning women to think it is alright to be violent against men.

Just finished your domestic violence article.Another good piece. Years back a friend had his alcoholic girlfriend attempt to spit him like a bug on a pin,with a butcher knife,while asleep in bed. He woke up and managed to get the knife away from her. She called the police, claimed he had beaten her,which was untrue and he ended up in jail with a domestic violence charge.Lost his job and his right to keep and bear arms,even though his attorney eventually got the charges dismissed.Women know they can use the police as their bullyboys to settle petty arguments.

Nobody I know is in favor of abusing women or men. Your article illustrates how one sided the domestic violence issue is and how it is used to further destroy the family.

I have personally been the victim of domestic violence, and sexual harrassement in the work place. The boss's daughter constantly touched me, rubbed up against me, and literally got violent when I spurred her advances.

I ended up quiting after a meeting with my boss and the owner asking if I was gay. Was completely floored, dont you like a woman touching you?? Only MY woman, why does that seem so out of place these days???

The last long term relationship I was in turned from her being verbally abusive, to her getting physical. For once I stood up to her abuse, and when she called me an asshole, I retaliated with cheat, first time in 7 years that I ever called her a name back, and it hit home, because she was caught cheating.

I went to the police, sat in the station for 2 hours while they ridiculed me, and then FINALLY they sent someone to her work to talk to her. She told them straight out she hit me 3 times, and the cops pressed her to see if I got physical with her IN ANY WAY.

She bragged that I did not have the balls, and the all the police did was negotiate her OUT of my house for that day, never brought a charge against her even though she admitted hitting me 3 times.

Keep up the fight, always enjoy your articles.

I enjoyed your latest article, Henry. We are bombarded with the same messages here: ie, 'To violence against women, Australia says "No"'. So violence perpetrated against men is okay? Shouldn't all forms of violence be condemned, not just the type that is so conveniently hyped-up to emasculate men and turn us into smeared, untrusted, second-class citizens? Every time I see one of these commercials, I cringe with disgust. Having been punched in the face, kicked, and - most painfully of all - kneed in the testicles by a previous girlfriend, I've seen the violent side of the 'new woman'. Despite this, I've never raised my hand in retaliation, as I would be charged and locked away. I reckon any man who makes a complaint against a violent female would be laughed out of the police station. Half of the 'ladies' I meet are more aggressive than me... how do they expect to become wives and mothers? To hard-bitten, man-hating, power-hungry, disgusting feminists, Australia says 'No!'