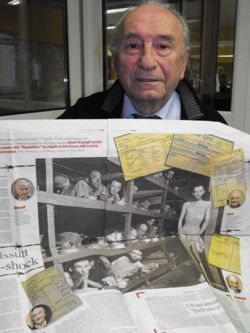 In 1944, Lazar Wiesel, 31, befriended the 15-year- old Gruner in Auschwitz and saved his life more than once. Gruner is in the bottom left-hand corner of the famous Buchenwald photo. Now Gruner is outing Elie Wiesel who he claims stole his friend's identity and work.

"What have they done to my friend Lazar?" Gruner asks. "I want to say kaddish. Where is his grave? Only this man knows. "

Elie Wiesel claims to have authored "Un di velt hot geshvign,"  in Yiddish and published it in Buenos Aires in Dec. 1955. In 1958 he published a French edition paring the original down from 800 pages. In the Preface to a new edition, Wiesel confessed he had been able "to correct and revise a number of important details." In the first English translation he is said to be "almost fifteen," while in the new edition he is fifteen when he arrived at Auschwitz.

One French professor has remarked that "La Nuit" is totally different from anything else that Elie Wiesel has written"  and speculates that Francois Mauriac wrote it.

Gruner has deposited copies of Lazar Wiesel's book in various archives. He says Elie Wiesel and his backers inserted atheist propaganda into the original: The idea that God has turned his back on the world and does not exist. "They used it to destroy the Jewish faith in God."

Gruner says Wiesel distorted some scenes to make them more heartbreaking. Elie Wiesel could not possibly have witnessed women and children being burned alive without this also happening to him.

Gruner resents that Wiesel and his backers have made millions off the holocaust while genuine survivors in old age have nothing to eat. (Wiesel charges $25,000 per lecture and has a tenured university position with a six-figure salary.)

Gruner is publishing a book entitled "Stolen Identity A-7713" in 16 languages and intends to use the proceeds to help his fellow survivors. After the war, Gruner went to Australia and became a successful painter and sculptor. He speaks English with an Australian accent. In 1962, he joined his sister in Sweden where he still lives. He did well manufacturing Hungarian sausages but was put out of business after he exposed Swedish complicity in the holocaust. He married and his wife passed away five years ago.

When Elie Wiesel won the Nobel Peace Prize in 1986, a Swedish newspaper Syd-Svenska Dagbladet contacted Gruner to vouch for Wiesel because both men were in the famous Buchenwald photo. "When I met him, I could see he was an impostor. He claimed to be Lazar but he was not Lazar. He would not show me his tattoo. He had a different birth date. He spoke English with a French accent. He didn't speak Hungarian."

In fact, the man identified as "Elie Wiesel" in the famous photograph is not Wiesel, nor is he Lazar who Gruner says wasn't in the photo. When the Swedish newspaper realized Elie Wiesel was an impostor, they dropped the story like a hot potato, Gruner says.

Gruner began a 20-year research search for his friend traveling throughout Europe and America. He says he found no proof that Elie Wiesel was in any concentration camp. But he did find the book written by his friend Lazar.

"Believe me, I wouldn't try to knock someone of this stature off his pedestal if I weren't 100% sure," Gruner says. "I'm not that kind of person."

Gruner emphasizes that while Wiesel is an impostor, the Holocaust did happen. Lazar Wiesel's original book is authentic. Gruner witnessed events described in it.

Gruner was in Auschwitz (Monowitz) from April 1944 to March 1945. He said four "transports" (cattle trains) carrying 6000 people arrived everyday. The platform had to be cleared in four hours. Roughly half the people -- those who could not work, women, children, the elderly and sick -- were separated and gassed. Gruner lost his mother and younger brother and sister in this way. The SS told the inmates that this was their fate if they didn't work. They said the fires were consuming "the rubbish from the trains" -- his family.

"The only way you will leave here is through a chimney," the SS told the workers who could smell the putrid smoke from their work camp six km away. Gruner weighed 60 lbs on liberation.

"Put me in a room with Bishop Williamson," Gruner says. "I'll teach him a thing or two. Auschwitz was no sanatorium."

Gruner sees the need for a Jewish state. "We need to have our own country," he says.  His main beef is that Jewish Reparations Commissions and people like Elie Wiesel are getting rich, while the real survivors are starving in old age. He also wants to do justice for his good friend, Lazar Wiesel.

and    Atlanta French Professor says Wiesel is a Con Man

and Is Wiesel a Fraud?

What happened to the Jews in the concentration camps is more than regrettable, it was horrendous. Hitler locked up many in his camps, not just the Jews. It was all horrific. I'm glad I wasn't alive and around to see it.

I have to add that people like Nikolaus Gruner are the "real Jews", as I put it. They had to suffer horribly for no good reason, and those that survived learned a powerful and horrible lesson about life. To some, it made them stronger. Just like Nikolaus Gruner.

I watch the headlines and see Bernie Madoff (or, as I like to pronounce it " MadeOff") who, among others, fleeced his own fellow Jews for money. His 'ultimate' reward. This is not only a slap in the face of the Holocaust survivors, but an insult to what I believe is true Judaism.

This Zionist movement is an offshoot of what I think is "neo-convervatism", a self created style of government that seeks to affirm its roots in something it is most definitely not.

I apologize for all the quotes, but I believe that things these days have become a farce. Many people claim to be who they are not. As a solid middle class citizen that works honestly for a living, I find it sickening that people like this are about to be about doing what they do. As always, the middle class pays, in the form of save or ship - sorry "bailouts", all the time decrying the fact that the middle class needs a save our ship too. Not just to keep our mansions, but to be able to work for a living for just one and our family as well.

There is no bigger theft than that of other people`s suffering. However, this one is probably not a one man theft: Elie Wiesel is probably only one of the main agents of a powerful planetary organisation directly connected to zionism and dedicated to put the Holocaust in the service of a godless zionism which itself is a tool in the hands of those who want to control the whole planet. I wouldn`t be surprised if those behind Elie Wiesel would offer some money to Gruner in order to stop his attack againt their agent.

Maybe, if Gruner wasn`t himself Jewish and a survivor of the camps, they would have already eliminated him.

After 10 years of research into WWII it`s wasn`t hard to learn about Zionism and Zionist crime , so this is something I`ve read before - more than once. There are many decent Jews who want piece and condemn Zionism, so I`m wondering how much longerare they going to put up with the persecution they get for Zionist crime. It`s like the crooked American politicians making America public enemy number one.

"He says Elie Wiesel and his backers inserted atheist propaganda into the original: the idea that God has turned his back on the world and does not exist. "They used it to destroy the Jewish faith in God."

That's a very important point. A primary theme of the Torah was no matter how severely they were tested, the faithful never lose their faith. Why would the hijackers of this account seek to change that specifically?

It's a clue that exploiters of the Holocaust have hijacked even the impressions of the real victims to suit their own agenda. Lazar Wiesel's true eyewitness account -- which is proof that Auschwitz was definitely a pre-meditated mass genocide camp with gas chambers and crematoriums - evidently simply didn't suit the version the hijackers want promoted.

The motive for the otherwise unnecessary theft would seem to be simply to have editorial control of the impressions of an eyewitness to suit their own agenda.