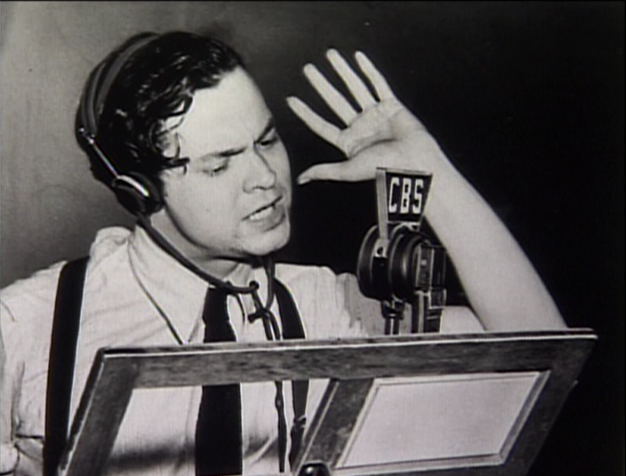 (left, Orson Welles, 23, in 1938)
On Oct 30, 1938, Orson Welles' radio play War of the Worlds had more than a million Americans running for their lives because 'thousands had died in a Martian invasion.'
Radio was used in the thirties to keep Americans living in state of constant anxiety and fear similar to today. "We interrupt this broadcast" was a familiar refrain that brought bad news- the Lindbergh Kidnapping, the destruction of the Hindenburg, another Hitler invasion. Indeed people thought of Hitler when they heard  "Martians."
The Question is, Was this a deliberate Illuminati psy op like Sandy Hook or Orlando? L.C. Vincent argues below that it was. Supporting this view, it took place on the day before Halloween, a Satanic holy day and it caused great suffering for many people. Trauma is used in brainwashing. Was it designed to test the feasibility of the rumoured Illuminati plan to fake an alien invasion in order to unite the planet, as William Cooper suggests here?
On the other hand, according to this excellent documentary on War of the Worlds,  the broadcast was whipped up in the space of a week and the news interruption angle was added at the last minute. While Orson Welles may have been connected to the Illuminati, (his grandfather was Secretary of the Navy under Lincoln) he certainly did not enjoy the charmed career Illuminati whores usually enjoy.
I highly recommend Magician: The Astounding Life and Work of Orson Welles which shows Welles as first and foremost an artist and gifted filmmaker ahead of his time. He was in love with his art and took acting parts to finance his own films. He was a "humanist" and toward the end of his life said he craved a larger mission than "art for art's sake." You have to believe in "something larger than yourself," he said.
While he admitted that his War of the Worlds had the hidden agenda of showing Americans how gullible they were, it is still unclear if he was involved in an Illuminati psy op as Vincent argues.  In any case, he was a prodigy, only 23 years old when he directed this radio play. He went on to have an illustrious career that does not reflect the Illuminati agenda. He died at the age of 70 in 1985.
(from June 22, 2010)
by L C Vincent

Hardly a month goes by when society is not subject to some psychological (or real) attack, whether it be false flag terror or white knuckle warmongering. These attacks are orchestrated by the Illuminati and trumpeted by their private house organ, the mainstream mass media.

A  classic early example of these psy ops was the 1938 "War of the Worlds" broadcast which created "accidental" and "unfortunate" panic and hysteria throughout the United States. Listeners tuned in to what they thought was a real invasion by Martians. It was funded indirectly by the Rockefeller Foundation through the  The Princeton Radio Project, and guided at every stage by members of the Council on Foreign Relations.

Actor Orson Welles, the creator of the program and the "news announcer" of this infamous broadcast, later apologized for the hysteria this radio show created. The Princeton University Radio Project, under supervision of psychologist Dr. Paul F. Lazarsfeld,  Frank Stanton (later head of CBS Radio and Television) and Dr. Hadley Cantril, hired Orson Welles to adapt H. G. Wells' fiction book "The War of the Worlds"  to the radio format in order to study the behavior of citizens under panic conditions. 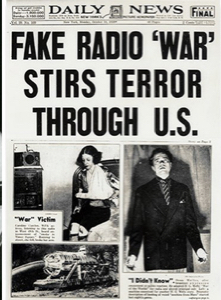 Not only was the panic created by a fictional Martian invasion the night before Halloween anticipated by its producers, the program was purposely crafted to create terror.

This very first electronic mass media "psy-op" was heard by 6 million people, 1,700,000 of whom believed the broadcast to be genuine, and 1,200,000 of whom were frightened enough to take action -- either by running away or preparing to fight the invaders.  Later, when the truth was revealed, Welles apologized repeatedly.   The idea of using an interrupting news-bulletin in the middle of what seemed like regular music programming was deemed excessively cruel, manipulative and deceptive.

It has been reported that Welles even received death threats from the Rockefellers should he ever reveal that the "unforeseen" reaction to this broadcast was precisely what the perpetrators had hoped to achieve and analyze,  demographically, psycho-graphically and statistically.

This secret test was used to judge susceptibility to phobias, fatalism and the fear of war.  Members of the general public were later interviewed and their reactions were paired against such variables as religion, education, year and make of car, reading materials, job security, etc.  Cantril later wrote a paper entitled:  "The Invasion from Mars -- A Study in the Psychology of Panic."  Cantril's study examined the power of the radio broadcast media and its effects upon a population under the direct influence of fear. 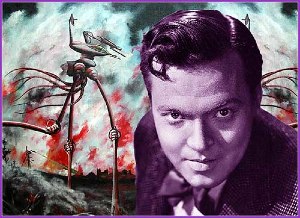 This first electronic stress test was just in time for the dawn of the age of television.  Only two years later, again with Rockefeller Foundation money,  Dr. Hadley Cantril established the Office of Public Opinion Research at Princeton.  Among the studies conducted by the OPOR was analyzing the effectiveness of propaganda produced by the forerunner of the CIA, known as the OSS (Office of Strategic Services.)

During WWII, Edward R. Murrow, also a CFR member, was paid by the Rockefeller Foundation and Dr. Cantril to monitor Nazi radio propaganda and judge its effectiveness.

From this project sprang the FBIS (Foreign Broadcast Intelligence Service) which eventually became the US Information Agency, used by the National Security Council as its chief disseminator of propaganda after WWII.

After leaving CBS, Frank Stanton became the Chairman of the RAND Corporation, an extremely influential government think tank, which researched among other topics, mass brainwashing of an unsuspecting public through the mass media.

At the end of the original radio broadcast of "The War of the Worlds" the announcer (Welles) is no longer heard; instead, the voice of a field artillery commander comes on the air, repeatedly calling the code:  "2X 2L calling CQ... 2X 2L calling CQ... is there anyone on the air?"

The "2 X" can easily be thought of as a "double cross" (two X's or crosses); the "2L" is easier -- To Hell.  Or Together, "Double Cross to Hell."  Quite an appropriate way to end a fake broadcast featuring a hoaxed alien invasion from Mars created to terrify the citizenry of the United States in order  to measure their reactions to artificially induced stress, like laboratory insects under the microscope of the Council of Foreign Relations for their hidden masters -- The Illuminati.

I heard Welles interviewed years ago, and he said the most important thing in history was the Jews. I also read that the last payment on the South Sea Bubble (in which Isaac Newton lost his money) was made in 2016. This occurred after the Bank of England was established in 1694. I also read that researchers are encouraging Trump to really audit the FED (Rand Paul’s bill) and expose and regain Bank of International Settlement’ gold stolen from Nationalist China after 1928 via the Sukarno agreement (and Keenan’s pending lawsuit) which JFK was activating 8 days before his death.

The most important aspect of true Jews’ history is, IMO, the physical debt jubilee which mirrors the Transfiguration and Resurrection of human potentiality of human spiritual potential.

It is now possible to view for free on the internet the 1936 version of H.G. Welles "Shape of Things to Come".

I have watched it several times, partly because I was fascinated by the concept of futuristic aircraft that they had at that time. It was also interesting that the hero of the story was a "Dr. Cabal" who believed that the world would be saved by a "freemasonry of science". He also had no tolerance for those who resisted his agenda and insisted that no other petty nation have it's own air force. That right would be reserved for his organization, "Wings over the World". Opponents would be brought around to his way of thinking by being doused with "the gas of peace". Starting to sound familiar ? The whole thing is dripping with illuminati theology !

Henry--I think more and more people would welcome Martians or any other off world group over the Rockerfeller/Rothchild controlled terrorism we are living through right now. We have seen real evil and it is them???

Polls, fake 'news' reports, just like the 1938 broadcast, are nothing more than treating us like rats in a maze. We are finished as the human race. They already have us chasing our tails and it will only get worse. All with the support of our 'democratic' governments.

Excerpt the "alien" saviors will be creations of the Illuminati just like the politicians we have now.

Some thoughts…Doesn’t surprise me about Orson Wells. In Fact it makes sense. Are you familiar with what CIA did to Ted Kaczynski, Unabomber? If not please see the Wikipedia reference. He was severely traumatized by the agency while in college and that is what probably set him on his path.

Poor Orson though, I think he also lived a tortured life because of them. He was sent to South America to do some type of propaganda film that never got finished. The film has been released but I don’t know all of the details. He made one amazing film that I saw as a boy back in 1981 and have managed to secure a copy of., “The Man Who Saw Tomorrow.”

It dealt with the prophesies of Nostradamus. The time line of events is off by a few years but it very accurately predicted the attack on New York City on 9/11. Wells was interviewed shortly after the film was released and called the content nonsense. If he only lived to see it come true!

The Gulf oil spill is not a false flag. This is something really big and life altering, probably for most of us on the planet. And it is just getting started. Divine intervention and mercy will be the only thing that can minimize this event. I also doubt that BP’s attempt to drill into the ruptured well to siphon off its contents will be successful. Again I believe only Divine intervention and mercy can cut short this pending catastrophe.