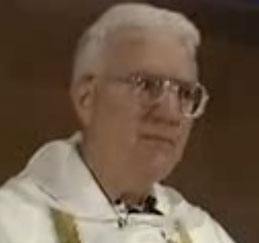 Many Catholics have probably never heard of John O'Connor but he was one of the first priests to acknowledge the cabalistic origins of Masonic Communism and to be expelled for opposing  homosexual control of the church.

Born and raised in Chicago, Father O'Connor was a Military Chaplain during the Second World War. He became curious about Hitler and the "anti-Semitism" of the Nazi regime. Many soldiers asked him why, when they liberated Jews from the concentration camps, some of the Nazi guards were themselves Jewish and had even been former mayors of towns in Germany prior to the War.

Fr. O'Connor was ordered to be examined by a psychologist following a talk in which he named his Superior as a member of the Gay Rights Movement. His Superior barred young men from joining the Dominicans if they refused to accept sodomy and homosexuality as a viable life style alternative. He had been informed of this by several young males who had sought ordination.

O'Connor sought the advice of a Canon Lawyer, Fr Alfred Kunz. Fr. Kunz was brutally murdered in a ritualistic fashion after assisting in the investigation of a satanic pedophile cult connected to the priesthood.

In the summer of 1991, Rome informed O'Connor that he was dismissed from the Dominicans. O'Connor packed his bags and left the River Forest Priory forever. He lived with his widowed sister until his death of natural causes Dec.7 2006.

On Ash Wednesday, February 28, 1990, O'Connor wrote: "When I made my vow of obedience 40 years ago, it was first and foremost to Jesus Christ, His Mother and St. Dominic and in obedience to them only death will silence my witnessing to the Truth."

O'Connor exemplifies the fate of the true Catholic today.

Fr. John O'Connor  also appealed to the Vatican for assistance and justice. He sent dossiers to no less than ten Cardinals and received not one reply. He concluded that the work of Masonic Communism had been almost complete now in the infiltration of the Catholic Church and that these Cardinals were complicit in the project. Randy Engel devoted a chapter in her extremely well documented book, The Rite of Sodomy to the heroic and courageous preaching of Fr John O'Connor.

Father John O'Connor made many audiotapes. One described the origins of Masonic Cabalistic Masonry.

"The Talmud then is the written form of that which, in the time of Jesus, was called,'The Traditions of the Elders" and to which he makes frequent allusions."

Also, reference in same book to: "In 1280 A. D. a further development of Talmudic thought, The 'Zohar' or Book of Splendor, appeared. This was known as the Cabal, or tradition. It was based on two things (1) generation, or fertility rites, as the most sacred word in the new instructions, which of course also became the "G" in Masonic symbols.

And (2) the precept that Israel alone is to possess the future world (Vayscheih foilio 177b). The Zohar derived from the Sefer Yetisirah, or 'Book of Creation' which appeared in Babylon in the third century...(Mullins, 'Curse of Canaan', p.43).

Fr. said that the religion of Masonic Communism was pagan naturalism or "Modernism"and that it will succeed in taking over all religions on earth for a One-World Religion of a One-World Order. Ultimately one man who is Biblically known as the 'Antichrist' will take seat of power as its god.

'The Antichrist' was a profound speech made in 1986. He heavily referenced Scripture, both the Old and New Testaments and the writings of the Early Church Fathers. Fr. O'Connor stated that," General Douglas MacArthur was ordered to withdraw by President Harry Truman because our government did not want us to wipe out Communism, in fact we did everything in our power to help it along." He stated also that MacArthur was, "Subsequently smeared in the Press because he got too close to exposing the men in our government who were Communists."

O'Connor cited many names such as Harry Hopkins assistant to FDR, stating he gave the Kremlin plans for the 'A' Bomb, the materials to build it and the building materials to construct the place to build it in. The latter being accomplished under the 'Lend-Lease Agreement' that was later hailed in the Press as what helped us win the war. Fr John stated "... the only real winner of WW2 was Communist Russia."

He added that the wholesale transfer of technology from the USA to Moscow was done under the guise to," ..make us safe and foster a World Government."

Searching for additional corroboration from WW2 military men I discovered this link which contains many excellent documents.

The content of one such document is described here briefly.

"Economic and psychological weapons rather than the launching of a third world war comprise the current Communist program for world conquest, General Albert C. Wedemeyer warned in a consultation with the Committee on Un-American Activities".

Fr. John continued in this one homily to cite the Communist Manifesto by Karl Marx urging his listeners to read a copy from their local library. He refers to the 'Planks of Communism" listed therein, telling the listener he will see that it was Marx who first came up with the idea of a Central Bank, a Federal Income Tax and the substitution of paper money for gold and silver which have intrinsic value. He adds that Franklin Roosevelt took gold from us in 1932 and the paper note replaced silver under Richard Nixon in 1971.

The paper note being nothing more than an I. O. U.  He explainied that we are at the mercy of the Federal Reserve which is of course not a government entity but, "a privately owned corporation and the only corporation that does not have to publish the names of it's principal shareholders. It is no more Federal than Federal Express."

He  affirmed that the most likely owners are the International Bankers and their families whose names he also gave. One of the names he mentioned was that of Armand Hammer whose connection to Al Gore I found startling, especially since he is so linked to the politics of climate control.

The methodology used by the Masonic Communists to implement the NWO included the destruction of morality, family and religion. O'Connor said that, 'Women's Equality' was also a 'Plank' of Marx's Communist Manifesto.

Fr John O'Connor suggested that by spreading the truth we can stave off the NWO but added that it will come about eventually via a Russian instigated attack on Israel and that the USA will counter. He surmises that both nations will be destroyed leaving Europe to rebuild and that at this time a global leader will appear on the scene and be hailed as the great peacemaker.

"This man will come out of Europe and will be Jewish, very intelligent and the incarnation of Lucifer himself. There will be one world religion and he will be its god."

Fr. John told us that, historically speaking there were antichrists all ready in the world and names Bonaparte and Hitler as two. The final one though, will make them pale in comparison and his crimes against humanity will be incomparable because he will be in control of the world's wealth. Fr. referred to the Book of Daniel in Scripture wherein we are told that the antichrist will control all the riches of gold and silver on the earth. Fr. pointed out that this has been set in place by centralized banks and paper currency.

Fr. John O'Connor's videos may be viewed here. He explains concisely how the Communist Manifesto has been implemented in today's society and how the Catholic Church along with other religions are systematically being destroyed for establishment of a one world religion in a One World Government to be eventually ruled by an antichrist.

The homosexual and masonic problems indicated by Fr. O'Connor in what was once the Catholic Church is only a symptom of a much larger problem.

The Catholic Church cannot function for long without her Head, the Pope, who governs Christ's Kingdom on earth until His Second Coming. Antipopes have ruled Rome since 1958; and the longer such a situation continues, the worse it becomes; today it is irreparable, and the Church has to be rebuilt from the foundation - the successor to St. Peter; and this cannot begin until a new Pope is found. I think he will be elected through miraculous means, since there does not appear to be any other way.

The establishment which rules from Rome is not Catholic, but a new and false religion; in fact it is the Pale Horse of the Apocalypse (Chapter 6), whose rider is "Death", and "hell followed him", because a false religion usurping the place of the true one cannot give life and salvation.

How did this come about ? Pope Pius XII did not heed the requests of Our Lady of Fatima, which was to 'consecrate' Russia to the Immaculate Heart of Mary; if this was done, Russia would have been converted; and the communist infiltrators (spoken of by Bella Dodd) which had gone so far as to penetrate the conclave as 'cardinals', would not have been able to interfere with the 1958 conclave.

There are some who say that Joseph Siri was actually elected Pope in 1958, but that his enemies in the conclave silenced him.

Thank you, so much, for letting people knew about Fr John O'Connor.Father and I were good friends. I met him at a conference at 'Most Holy Family Monastery, Berlin, NJ in 1993.I was there to video tape the conference, I told ,Father :that I didn't believe what he was saying about the W.W.II and the Holocaust; Later ,I sat down with him and he gave me books to read ,so that I would become educated

His words "John educate yourself", Well that started my video taping every conference he did,
I hold the rights to all the videos and Audios He was a great man and friend
May his soul rest in peace

(I've been doing sustained self-education on the history of the Catholicism and also the American active Catholic churches today, as you know)

There's no doubt that Giovanni Montini - aka Paul VI was an active homosexual
http://www.traditioninaction.org/HotTopics/a02tPaulV_Accusations.html
He was also a Freemason http://smalltowntexasmasons.blogspot.com/2006/11/is-our-brother-pope-catholic.html

(check out the handshake - grip of the Fellow Craft)

I concur that the homosexual-pedophile network didn't embed in the Church before the 20th century and mostly after Paul IV
http://www.traditioninaction.org/tiabkHomo.htm

It's important that non-Catholics be aware homosexuals and pedophiles in particular were a Freemasonic infiltration to destroy the Church - it was NOT a 'hidden' feature of the historic Roman Church or Eastern Orthodox Catholic Church.

It's also important that Catholics re-examine the events of 1958 conclave, John_XXIII , Vatican II, and the bizarre sex scandals exploding out of the last 30 years and put two and two together.
A Templar book, Pourquoi la resurgence de l'Ordre du Temple pub.1975 contains,
page 149: “The direction of our action: continuation of the work of John XXIII and all of those who have followed him on the way to the templar universalime.”

A note—I was frightened and instructed by the article on Fr. O’Connor. Thank you for it.

After watching a little of Father O'Connor's video's he makes an interesting point that the coming of the anti-christ 'is a punishment
of God upon a sinful and rebellious mankind' reminds me of one of the greatest goons of history and someone who by the way is a fitting
example of what is about to come upon this world!!!!!!!!!!

"I AM THE PUNISHMENT OF GOD. IF YOU HAD NOT COMMITTED GREAT SINS, GOD WOULD NOT HAVE SENT A PUNISHMENT LIKE ME UPON YOU." Genghis Khan