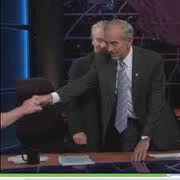 Ron Paul was a shill for Mitt Romney all along. How did Alex Jones and the Patriot Movement  miss this?

The more we look at Ron Paul, the more we wonder why so many people ever believed in this guy in the first place. Here are five more reasons they shouldn't have.

Doug Wead has been a highly influential adviser of many Republican Presidents and hopefuls, going back all the way to Ronald Reagan. His main sponsors, however, have been the Bush Family. He has worked for them between 1984 and 2000. His most senior position was that of Special Assistant to President Bush Sr.

TIME magazine called Wead an insider in the Bush family orbit and "the man who coined the phrase 'Compassionate Conservative.' (wikipedia)

On june 5th Doug Wead wrote on his blog: "What was behind the broken bones, hysteria and bruised egos at last weekend's Louisiana State GOP Convention?  Why the attacks on legitimately elected Ron Paul delegates?   Don't the Romney folks get it?  Don't they want to win in November?  Don't they want and need the youth vote?  Hispanics?  Independents?  Even, the Democrats, that Ron Paul is attracting to the party?"

In short: the Paul Campaign is a Republican Campaign masquerading as 'Liberty Movement' and attracting the disenfranchised into the party for Romney. According to the highly influential GOP insider and Paul Campaign Adviser Doug Wead, anyway.

The scale of this fraud is massive. It's so bad it might have actually cost him the nomination.

According to Dave Hodges on Farm Wars, "Even the New York Times admitted that the Republican Primaries in Iowa and Maine were stolen away from Ron Paul. Ron Paul was undoubtedly winning the Republican Primary in the early days.  However, as the nomination continued to be stolen, and the will of the people was being usurped, Ron Paul remained silent to this grand theft of the nomination process. Even in Louisiana, as Ron Paul was winning, the Louisiana Republican leadership, controlled by Mitt Romney minions, stole the Paul delegates and gave them to Romney and then proceeded to beat up and evict the Ron Paul delegates when they protested. Meanwhile, Ron Paul chastised the dissenters and admonished his followers to be polite."

Considering the enormous momentum that the Paul rallies showed, there is every reason to believe that Paul was actually the front runner in these primaries. Why did he allow the blatant and massive vote fraud? Why did he avoid the risk of winning?

3. Why do people say Paul is a 'Peace Candidate'?

Not only is he lying through his teeth about 9/11 and thus enabling the Empire in the Middle East, we can see how he feels about the Empire through his budget. Just look at his Restore America budget. Therein you will find, out of a trillion dollars worth of cuts, a paltry 15% will be taken from the pentagon, while 63% cuts will be made to food assistance, and 35% medicaid or -- 22% to life sustaining entitlement cuts across the board overall. Clearly, Paul values the financial viability of the empire's war apparatus more than he does for "useless eaters".

He will do away with food stamps for the poor during a depression with 22% unemployment, as a mere statist corruption of the free market, but he will continue the 500 billion Raptor Stealth fighter and all the other insanity that the US Army is feared for. It is exactly this kind of thing that gives Libertarians a bad name.

4. The Romney betrayal was planned long ago.

Analyses of the GOP debates show that in 20 GOP debates Ron Paul attacked Romney's rivals 39 times while never assailing Romney even once. http://thinkprogress.org/politics/2012/02/27/432664/ron-paul-never-attacked-romney/?mobile=nc

The above quote by Doug Wead is another case in point.

Just a month ago "Former Ron Paul staffer Lew Rockwell says that talk of an alliance between Mitt Romney and Ron Paul is an "establishment trick" to smear Paul by making him appear as a sell out."
http://www.infowars.com/insider-says-talk-of-paul-romney-alliance-is-establishment-trick/

Yet many people out there still cannot believe they obvious: they have been taken for a ride.

5. His 'free market for currencies' nonsense

People still don't get that it is all about currency. Our masters are bankers after all, they rule through control of money. How many have ignored Paul's Gold Standard, even if they knew better, because of his 'constitutionalism' and (unreal) stand for peace? In this way they have supported a Trojan Horse.

Ron Paul has always favored a Gold Standard, ever since the days he wrote a 'minority report' with Lehrman on the Reagan's Gold Standard commission.

A year ago Paul Krugman said "Gold bugs have taken over the GOP." That was the main goal of Ron Paul.

Paul owns five million in assets and it's all sunk in Gold assets. This makes him a special interest candidate. If his colleagues own stocks in Merck while they want to force vaccinations on us, do we say they are putting their money where their ideas are? Of course not. Paul has profited massively from the rise of the Gold price over the last few years and few have been in a position to stimulate this price rise more than he was. Exactly the kind of behavior we hate politicians for.

The whole 'free market for currencies was just invented to make the utterly disgraced Government Gold Standard more palatable for the somewhat more aware proponents of Austrian Economics. Discredited or not, his erstwhile colleague, and buddy Lehrman is promoting the classic one and according to Steve Forbes he will get his way after the Bilderberg anointed Romney moves into office.

Ron Paul has been paving the way for this for more than 30 years and even though he won't be around to see the results, he has been indispensable in this long term Money Power operation.

Isn't all this a little TOO blatant? Did the Pauls really miscalculate, or is this a provocation? A stab at the hearts and minds of the 'liberty' community? Alex Jones detractor David Chase Taylor sees a clear pattern in Jones' methods of blaming the US Govt for Zionist crimes, with the idea of goading Patriots into attacking their own Government, not only suiciding, but providing Leviathan with the excuse to implement Martial Law.

Thanks pm and Faux Capitalist

Related: Bro Nathaniel- Did RP Seel Out to the Joos?

the Austrian 'Free Market for Currencies' Hoax
Hate the State, buy Gold and all will be well: an Alternative Media in crisis

Anthony Migchels is a Dutch monetary reformer . Please visit his blog and support his courageoro Natus and selfless work.

I became aware of Ron Paul’s essential fraudulence over a period of a couple of months this past spring. I have documented that learning experience with the article, “Ron Paul’s CPAC and Virginia Cop-outs” at http://www.dcdave.com/article5/120314.htm .

There is an important lesson for the sheeple in the Ron Paul -debacle.

People would do well to remember that Alex Jones has dismissed any criticism to Paul's policies during the last couple of years at least with the comment "i know he isn't perfect..." and then circled back to backing him fully. And now he acts surprised? Interesting to note too, that David Icke has put up numerous pro-Paul articles over the years.

Is the necessary conclusion not clear? Are we to believe that these great researchers haven't been able to piece together the truth about Ron Paul? All the while there have been few voices in the movement that have looked at Paul critically, and who have also said, that people should not look toward political (and Masonic) lifers for salvation. AJ, Icke and others have guided their gullible audience to support RP, and are now paying mere lip-service to the disappointment they helped set-up - so as to keep their audience, so that they can again feed them more lies tomorrow that will keep their audiences enthralled and in check.

"When you gonna wake up, people?" - Bill Cooper

OUTSTANDING expose of Ron Paul. Anybody who has seen him giving the masonic handshake should know that he is a frontman trying to lead the liberty loving patriots into a dead end. The two party system is killing America. Ron Paul is trying to prevent a strong third party from getting a foothold. We need a strong third party and paper ballots hand counted. Thank you, Anthony!

Yeah - on the Ron Paul article -
Well, sure. This one's so obvious I don't even know why it bears discussion. Any discerning adult including readers of this site
and a few others, should know by now the that elections and campaigns put on the establishment are simply for the benefit of keeping the masses occupied and befuddled. All part of what one writer I know calls ' The Clown Show'.

The whole thing with Paul, including the Masonic symbols, handshakes etc. should have made him very very obvious as just another part of the sham. Our salvation, national and personal is NOT to be found in establishment elections.

t would appear that many people seem to think that Ron Paul is somehow above election promises/lies.

If we put aside the party politics and reflect on the current presidents campaign promises that became lies: closing Gitmo, getting us out of wars, transparency in Gvnmt., putting people before corporations, ad nauseum. How many times did the previous administration lie to us (just so we can see that its not just one-sided)?

Then, why would it be so unthinkable that any of Ron Pauls platform promises may be as hollow as any other politicians?

I can't wait to see what kind of circus ensues at the RNC -- I suspect it will go like the '68 Chicago DNC except the Police-state is in full-force now.