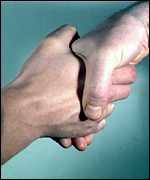 Shifting his car into reverse he matter-of-factly stated, "If you want to borrow any money around here you need to come and see me at the men's club (Freemason's Lodge)." Without another word, I got out and he drove off.


by Roger Barbour
(for henrymakow.com)

Fourth in a series, "Freemasons in My Life."

The late 1980's found me at the helm of my own successful repair business located in a large metropolitan area on the East Coast. Conflicts with Masons were rare during my first thirteen years in business and I found their membership to be quite civil. I attributed this to the area's fast paced, competitive environment, high educational standards and a significant Catholic influence.

With the coming of George Bush Sr., things rapidly took a turn for the worse. In late 1991, I closed my doors and moved my equipment to a parcel of land I had previously purchased as an investment in South Central PA.  Situated adjacent to the interstate, it was a prime location for business, with a livable house and all the proper zoning in place. The obvious snag was a strong Masonic presence evidenced by billboards along the highway staking out this territory.

My first tasks would include building a small shop for the equipment and completing the set-up for a new business. To this end, I would need a construction loan and figured to use the property, which I owned free and clear, as collateral. To start this process, I made a trip to the local bank and met with a loan officer.

Once the necessary paperwork was complete, the loan officer came out to review plans and verify everything in person. At the end of our meeting he was obviously satisfied with what he had seen and said, "Everything looks great, I see no problems. I can give you my personal word that this loan will be approved. The only requirement left is our commercial appraisal for which there is a $2,500.00 fee."

What choice did I have? I authorized the expenditure and started making plans for a short trip to sea in order to bolster my bank account. In the interim, I toured the local supply houses, met with vendors and set up my accounts with them. At the same time, I made a trip to the local town hall and registered the business. All of these endeavors proved to be a singular experience and I found that my "Freemason detector" just about red-lined with each successive encounter. It began to seem likely that I was the only person in the area who "didn't belong".

Two months later, I returned from the trip with a nice, fat pay cheque in my pocket and found a message requesting me to contact the loan officer. When I showed up, our meeting turned out to be short and sweet. My loan had been denied due to insufficient income. Evidently, my potential to earn $85K per year at sea had no bearing with respect to a $40K loan. Certainly, I could have made a few more trips and bankrolled the deal out of my pocket but that's not the object of business. Credit is the lifeblood of commerce and without legitimate debt; you find that you have no credit.

Returning home, I fumed over the $2,500.00 rip off and everything else to do with the situation. My anger was still at full boil two days later when a car drove up with a septuagenarian at the wheel who asked if I could look at a job he wanted done. Needing a distraction, I agreed and got in the car.

Before reaching the end of the driveway, my "Freemason detector" had already flown off the scale and questions about this guy's real agenda began bouncing around in my head.

As we toured the local area like a pair of sightseers, he pointed out businesses, farms, buildings and tracts of land that he claimed to own.  During the ride, he never mentioned the "job" again nor did he ever look directly at me. Thirty minutes later, we were back in my driveway and he suddenly focused on me like a laser beam.

Shifting his car into reverse he matter-of-factly stated, "If you want to borrow any money around here you need to come and see me at the men's club (Freemason's Lodge)." Without another word, I got out and he drove off.

That evening I sat down and reevaluated my predicament. It was plain to see that I was in a no-win situation. Nothing, particularly business, was possible in this area without the approval of the Masons. They "ruled the roost" in banking, law and government. Masonic affiliation was required to get a job delivering newspapers and the mere mention of the term "Masons" struck fear into the hearts of the locals. Obviously, it was time to go to plan "B".

I interviewed several real estate agents and could tell by their reticence and negativity that they were part of this Masonic cabal as well. Engaging them would serve no productive end so I settled for a simple "For Sale by Owner" sign nailed to a tree.

Less than a month later, fate miraculously kicked in and I received a call from a developer that wanted to build a strip mall on my site. At the passing, I received a check for nearly six times the amount of my original investment.

The real reward came when the same loan officer that ran the game on me handed over the check as I quipped, "Yes....There is a God."

By mid afternoon, I was well on my way towards Florida in a rented truck filled with my gear. It would only be a question of time before I had more adventures with the Freemasons at my next destination.
---------

I read this article with great interest as I am a Freemason and can tell you that in New York they have lost all influence. The Jews run the roost and have infiltrated the lodges completely.

Right after the civil war the international (Jewish) bankers killed Lincoln for printing greenbacks which were debt free money.

The Masons were taken over by 2 jews

1) Albert Pike, Known pedophile and Zionist Jew who spells out in his book Morals and dogma how Masonry (he changed it to 33 degrees instead of the 99 it once had) should be based on the Kabala. The masons until then worshiped the 5 pointed star. Pike changed it into the 6 pointed star and slightly changed the Masonic emblem to be a representation of this star of David. Later Baseball which is a clearly Masonic game seduced the American public so recreation would be an obsession of Americans and not industry and innovation.

2) At the same time Adam Weishaupt was the man who made the decision to have the masons adopt the policy of not speaking about â€œreligion money or politicsâ€ at any meetings essentially quelling any power they might have which the lodges had yielded up until that point. Today If you become a member of a lodge the Brothers have no idea that the power that built this country was based upon Egyptian Metaphysics is no longer practiced and instead They open, close and then have a meal which is just an excuse to spend a little time away from home and the wife.

3) The Scottish Rite which is one of the 2 main paths of masonry (the other being the York right which I just Demitted from) was brought here from Scotland by another jew Henry Andrew Francken . Today in lodges There are groups made up almost exclusively of Jews that run the show and even the rank and file Jew is offended at the level of Zionism.

4) So I ask you, if you remove Money, Politics and religion from topics of discussion what is left? The answer is not much and Men of all faiths are seduced into this club to subvert their energies so they will not compete with the Zionists in business or politics.

One more thing (really a hundred)

A member of my lodge pressed the Master who has been a mason since he was a boy, what is the name of the god of the masons? He would not answer saying that when we learned the rituals he would tell us. However we already showed our proficiency a year before so he pressed on and got no answer and left the lodge. My research shoes that it is the gods of the twin towers. This is why there are 2 pillars in the lodge One for Enlil and the other for Enki. (Sumerian names) The clues here are the legend of Tubal Kane

The 10th generation of the famous Kane who killed able. When the curse that god bestowed upon his family was finally lifted he went to the west and built a city of twin towers one for each for the twin gods. Enki being Yahweh. Combining the 2 faiths and more as they accept everyone is Secularism. No faith practiced today believes in just one god. They choose to worship only one but they acknowledge others.