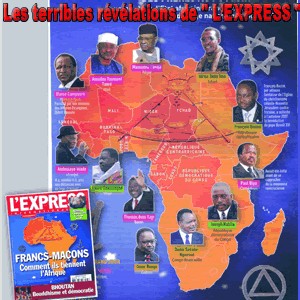 The "International Community" has imposed sanctions on the lawfully elected President of Ivory Coast, Laurent Gbagbo. This article shows that despite pretensions to "human rights, " Freemasonry is a key element in Western imperialism, and the New World Order.

(Condensed by Henry Makow. Editor's Note: I am surprised by the lack of reader response to this extremely revealing article. If France is so tightly ruled by Freemasons, you can assume most other countries are very similar. Needless to say, Freemasonry is an arm of the Illuminati central banking cartel. )

French Freemasons and their African lodge leaders play a key role in the current impasse in the Ivory Coast.

Freemason lodges maintain a formidable, covert influence within the French judicial and police structures. All three Freemason lodges in France were caught influence peddling and false invoicing on state contracts. Freemasons in the judiciary hamper any investigations and muzzle the press.

As in France, Freemasonry is ubiquitous at the very top in many African states. For eg. Denis Sassou Nguesso, the Congolese president, is Grand Master of the Grand Lodge of Congo - Brazzaville linked to the National Grand Lodge of France; President Mamadou Tanja of Niger; Chad's Idriss Deby and FranÃ§ois BozizÃ© of the Central African Republic are among at least twelve African presidents linked to the Masons. In November 2009 Ali Bongo, the new Gabonese President was ordained as the grand master of the Grand Lodge of Gabon (GLB) and the Grand Equatorial Rite, the two predominant Freemason orders in Gabon.[ii] 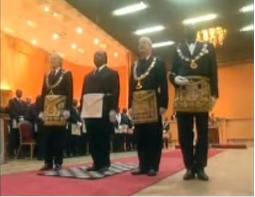 The Masons have always provided the leaders and the staff of French colonialism. FranÃ§ois Xavier-Verschave described the secret control system of its leaders as "the secret criminality in the upper echelons of French politics and economy, where a kind of underground Republic is hidden from view."

By tradition in France, foreign affairs are the French president's private domain. The foreign affairs minister only applies his policies. France is the only Western country where foreign policy is not a debating topic in the national legislative bodies. The sovereignty of the French people does not count for anything even if it has elected the president directly. The Parliament has no checking powers and is quietly relegated to domestic matters.

French agents have had no compunctions about ousting African Presidents or defending others against coups. Their role in attempting to overthrow Gbagbo is well documented. A recording of several meetings was copied from a French laptop which was captured which shows, inter alia, how the French behaved.

The French method of making a coup was well-documented in an intelligence report on a meeting in Burkina Faso. The parallels with Madagascar are clear. They decided to promote a coup in Abidjan on 22-33 March 2006.

Alassane Outtara [now backed by the West to replace Gbagbo] opened the meeting and introduced Pouchet. He spoke and said that he had come directly from Chirac with the message that "ADO (Ouattara) your son and brother will be President of the Republic of CÃ´te d`Ivoire before the elections of 2005." Chirac has promised "There will be no disarmament in CÃ´te d`Ivoire without our agreement. It is necessary that the agreements of ACCRA III are voted on before they can insist on disarmament.

All France and JACQUES CHIRAC support ADO to lead him to taking power in five months; i.e. in March. We have recruited mercenaries who are currently in training in Mali and in Burkina Faso. In March we will lead ADO to power with the assistance of the mercenaries who are in training with BurkinabÃ© officers and Malians. Our objective it is to put ADO in power". "I shall come again in December, with President Compaore, and will introduce you to the mercenaries. Ouattara will return in March to take power."

The next speaker was Blaise Compaore, the President of Burkina Faso, who thanked Pouchet and Chirac. He criticized the Ivory Coast government for ignoring the rights of Ouattara and said "It is my name which spoiled in this business. In Burkina my officers are doing remarkable work with the mercenaries to make them ready. I support you. We are moving to put things in place from there for you. Do not be afraid; we will win the battle in a little time. In five months all will be ready".

There were several attempts at making a coup against Gbagbo over the next five years. Most were anticipated and prevented. Others died for lack of interest. In almost all these cases the active participants were envoys from France, combined with elements of the French (UN) peacekeepers and local African Presidents linked by their Masonic ties to the French business and political elites... The implementing parties and logistic suppliers were French agents working in the man French multinationals in Abidjan. 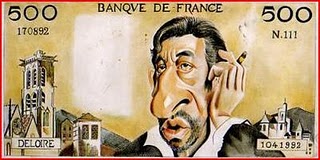 This is normal French neo-colonial behavior. It has always been done in the name of France but without any democratic debate. It advances French business interests and rewards the Presidency. This impasse in the Ivory Coast is just another French plot by the same people and using the same collaborators. However, this time the French have managed to hook in the 'international community' to support them.

In summary, the colonial pact maintained the French control over the economies of the African states; it took possession of their foreign currency reserves; it controlled the strategic raw materials of the country; it stationed troops in the country with the right of free passage; it demanded that all military equipment be acquired from France; it took over the training of the police and army; it required that French businesses be allowed to maintain monopoly enterprises in key areas (water, electricity, ports, transport, energy, etc.). France not only set limits on the imports of a range of items from outside the franc zone but also set minimum quantities of imports from France. These treaties are still in force and operational.

It is probably very little surprise to other Africans that the attempts by Gbagbo to break free of these chains irritated the French. The African Presidents were kept in power by French armies. The economies were kept under the control of French businesses licensed to have monopolies. Other nations were kept out. The African presidents, in exchange, gave 85% of their national wealth to the French Treasury to hold for them and paid a regular ransom to French politicians for keeping them in office.

What is the mystery to many on the African continent (if not among the lotus-eaters of the West) is why the United Nations and the international community would take sides with the Godfathers of France instead of the victims in Africa.

This French political and Masonic system is certainly not the future for Africa and sending troops to kill innocent Africans in support of such brazen and deadly corruption is not everyone's idea of a democratic process.

But Gbagbo's refusal to bow to international pressure has sent over 22,000 Ivorians fleeing the country amid fears of the return of civil war.

UN peacekeeping chief Alain Le Roy has said he will seek an extra 1,000 to 2,000 reinforcements for the over 9,500-strong mission in coming days.

Gbagbo has turned down offers of exile and amnesty for him and his camp in different countries.

Very grateful for the publication of these articles, which your reader will agree with me are unconventional news articles, yet informative especial for those African and non-African residing in the so called â€œDevelopedâ€ countriesâ€¦

On the subject of "Freemasons Key to Imperialist Control", I must confess was myself a new recruit during my student life in the Ivory Coast. The reason for my recruitment was due to my â€œfuture leadership" profile, I was told.

The concept of â€œSecret societyâ€ surrounding the Freemason has always attracted our African leader from the â€œFranceAfriqueâ€ territories, especially those who have never understood what being a â€œmodern slaveâ€ means.

For the French so-called Ã©lites, it is still a powerful tool to keep our leaders conscience under control and steal our resources. Like Jean-Marie Adjafi a well-known Ivorian author put it crudely and ironically â€œKeep silence, weâ€™re here to develop your countryâ€ â€¦

Very fortunate I was to have broken free from this control of my conscience, following the 1999 military coup in the Ivory Cost.

By the way, I am an Ivorian citizen by birth with both parents Ivorian, and from the Abbey tribe, an Australian permanent resident, oops â€¦ thought it was important to mention for your readersâ€¦

Once the son of an African diplomat told me that back in Africa, in Gabon, if you wanted to run for any political position no matter how miniscule, you HAD to be a Freemason. He was referencing his uncle who tried or who had done it. Either he was or became a Freemason to do it, cannot recall. On another note, I had read somewhere on line about their secret greetings.

Since I was surrounded by Freemasons, I would screw around with them. One asked me the time and I replied "there no longer is any time" and he was taken aback. Another became intoxicated and as I argued with him that Lucifer was the supreme being of the Freemasons, he finally admitted to it and that they all know about the NWO etcetera while another standing near to him told him to shutup.

First of, it is not French "colonialism," but French destructionism.

It was the Algerian minister and Arab nationalist Mouloud Kassem Nait Belkacem (Mulood Cassem Neit Abu El Cassem), a most Germanized Arab politician, who, in the 1970's, attacked the term "French colonization" and proposed "French destruction."

He argued that colonizing a land is turning it into civilized, just as the Anglo-Saxons or WASP peoples (falsely referred to by the Illuminati as "white") did in the past centuries in North America, South Africa, Australia, Rhodesia, etc... and just as the Arabs did in Spain in the High Middle Ages. And he argued that all the French did in Africa, Vietnam, and Syria was more destruction than civilization.

Making the difference between colonialism and destructionism is one step ahead against the "history" books of the Illuminati.

Second, the problem with these leaders (blacks, latinos, etc) who stand against the oppression of the international, demonic cabal ignore almost all about the conspiration and its plan of a world government. They also ignore the truth about feminism and the planned destruction of Christianity and Islam by way of stimulating religious conflicts.

Last but not least, it is not in black Africa that the France-affiliated Freemasons are the most active and dangerous, but in the Arab West (Morocco, Algeria,Tunisia, Mauritania) and Lebanon-Saudi Arabia. Just see how women are being furthered in key positions in these countries! How symbols of nationalism are being erased and how the words"humanism" and "cultural diversity" are so frequently used by the "elite"!

In Algeria for example, Freemasonry was banned by the Military Intelligence of Nasser (Egypt) right after regaining independence from France in 1962, but it is now growing all over this largest country of the Mediterranean through the Rotary and Lion's Clubs. The person at the head of the Algerian Rotary, a terribly ugly woman named Saida Benhabiles, is a man-hater feminist who hates arab nationalism and cherishes the French Revolution. She prefers talking in French rather than Arabic and, like many Algerian politicians, "writers," and "singers," she stated that Algeria is not an Arab country, but a "multi-cultured nation." She is a close to the Algerian president, a hugely corrupt Freemason who loves NapolÃ©on and said at two occasions that "if God created man, bear in mind that he also created satan!" Wink!