France Didn't Have a Revolution 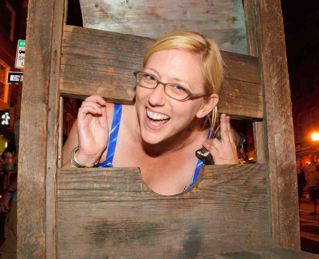 The French Revolution was part of the long-term Illuminati banker
plan to reshape mankind to serve them and their god Lucifer.

" The Illuminati operating in the guise of the Jacobins forced
the regime change historians call the French Revolution."


The goal of the French revolution, to destroy the ancien regime, is coming to its fulfilment today with migrant invasion and
yellow vest protests.
by Andrew Smith
(henrymakow.com)

The value of history lies primarily in appreciating what's happening today. We have a sense that events are driven by the past and that history repeats itself.

But why? Perhaps, the hidden planners of historical events have a limited repertoire of dirty tricks. They suppress the history of the deceptions practiced on our great grandparents, so they can mislead, maim and mutilate us and later generations.

Only when we see that the French Revolution of 1789 was planned and financed from abroad (just like the Russian Revolution of 1917) can we suspect that the current "unrest" and "revolutions" in Tunisia, Libya, Egypt, Bahrain, Thailand, Yemen, Syria and now Malaysia are not truly popular revolts but irregular warfare coups.
The dictionary defines "revolution" as a "sudden and violent change in government or in the political constitution of a country, mainly brought about by internal causes; as the French Revolution of 1789." But subversive elements in London working with French and European revolutionaries--NOT INTERNAL CAUSES--engineered the Paris bloodbaths historians call a revolution.

Before 1919 when Nesta B. Webster published her history of the French tragedy, there was nothing in English except Thomas Carlyle's The French Revolution (1837). In her preface to The French Revolution: A Study in Democracy (1919) she expressed shock.  "So far, in England, the truth is not known; we have not even been told what really happened. 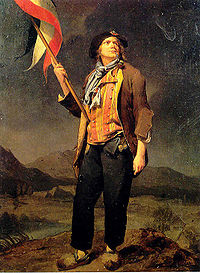 Histories still teach that before the French Revolution the French aristocracy kept the peasantry hungry and desperate without any real hope or direction for the future. In her work, Webster explodes these notions regarding peasant misery before 1789 with the letters of Dr. Rigby who traveled through the French countryside in 1789 and who described "its extraordinary fertility" and its "state of the highest cultivation."

"The crops are beyond any conception I could have had of them ,,, tens of thousands of acres of wheat superior to any that can be produced in England..." He described the French people as happy, prosperous and contented. (pp. 4-5)

Yet in the midst of this abundance there was famine. It triggered the French Revolution just like the unrest today in the Middle East. And we are still taught that upon hearing of the starving French peasantry, Louis XVI's wife, Queen Marie Antoinette remarked,"Let them eat cake." This bogus quotation is used to color the French aristocrats as out of touch. In fact Marie Antoinette blamed England. She knew what was happening.

And Americans today like Webster, have blinders on when it came to their own government's dishonorable foreign policy. Webster refused to hold her English Government responsible notwithstanding the overwhelmingly damning evidence.

"What, then, is the explanation of the belief in English cooperation with the revolutionary movement? Of the English guineas found on the rioters? Of the Englishmen mingling in the mobs of Paris during popular agitations? Of the seditious pamphlets printed in London? Of the traffic in letters, messages, and money maintained between England and the revolutionary leaders? Many of these leaders were constantly in England both before and during the Revolution... These facts admit of no denial: to suppose, however, any complicity on the part of the English Government is illogical and absurd." pp.30-31

A Royalist historian and contemporary of the worst atrocities, Felix Louis Montjoie, copiously documented the role of French King Louis XVI's cousin, the Freemason Duc d'Orleans, who bought up large portions of the French grain in 1789. This role backfired on him as he was guillotined in Nov. 1793.

Later historians document the role of  Pitt, the English Parliament and the King's Privy Counsel in hoarding French grain with the aid of the Illuminati British East India Company in warehouses on the English Channel Islands of Guernsey and Jersey. ("Why the French Did Not Have an American Revolution," by Pierre Beaudry, p. 5.)

England was a mere pawn in the Illuminati game of pseudo-revolutions that overturn governments and give credit to democratic/communist freedom fighting homeboys and eventually even train the conquered population to celebrate the destruction of their history and culture. So today the French ironically celebrate their disgrace with Bastille Day, July 14

"The earlier revolutionary leaders were, as we have seen, the disciples of the German Illuminati, and it was they who initiated them into the art of forming political committees " to carry through the great plan of a general overturning of religion and government . . . .These committees arose from the Illuminati in Bavaria . . . and these committees produced the Jacobin Club."

The chief lesson," Robison goes on to observe, that the revolutionary leaders took from Germany, " was the method of doing business, of managing their own correspondence, and of procuring and training pupils." pp. 190-191

The Illuminati operating in the guise of the Jacobins forced the regime change historians call the French Revolution.  During the Russian Revolution they masqueraded as the Bolsheviks. Today they brag they are behind the Middle East revolutions. So maybe we should believe them.
.---
(from July 11, 2014)

just like the unrest today in the Middle East
http://adask.wordpress.com/2011/03/11/the-political-unrestoil-pricefood-price-spiral/

Comments for "France Didn't Have a Revolution"

Andrew Smith's article is close to the truth, he misses some important details. The Duke D'Oleans was funded by the British intelligence to buy up the French grain harvests. He then gained control of the nation's news papers and blamed the famine he created on Louis XVI. Louis did little to stop him, and he learned if you don't use your head you loose your head.

The "Illuminati" keep getting blamed, but what is this shadowy entity? It was the British Crown. They were sore at France for its aid to the American Revolution. Lafayette returned to France and became mayor of Paris. He convinced King Louis to phase out the monarchy and replace it with an American type government. The British crown got wind of this and could not allow France to break away from the ancient Babylonian economic model of despotic Oligarchy.

Finally somebody made this point clear ( that "revolutions" are always organized and financed from outside and don't arise from the native people's desires ). Also, an interesting addendum, that Robison and other "non-official/revisionist" historians mentioned is that to aid and add numbers to the Jacobins ( Low-level deluded french Freemasons ) thousands of MERCENARIES were hired, specially from Germany and Italy, to agitate and attack Bastille, killing sadistically the Royals.

A reason for this could be found in the Protocols of The Learned Elders of Zion ( book shamefully "forbidden" and out of press here in Brazil due to pressure from the Israelite Federation ) where they explicitly point that the Gentile's only hope and protecting power, his "breastfeeding mother" is the Blood Monarchs, cause corrupted as they may be, they still hold a symbiotic ( and symbolic ) attachment to their original people.

Instead, the document goes on, "we" should replace that with demagogues and opportunists and establish "democracies" in which all parties eat from our hands ( they are begging for campaign money every 2 and 4 years ) . One of the reasons why I stand for the restoration of the Empire here in Marx-stinking ( and bankster-occupied ) Brazil.