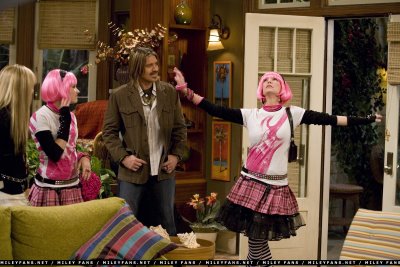 When asked if he thinks his family is under attack by Satan, Billy Ray Cyrus says, "no doubt. There's no doubt about it."


BY ZEN GARDNER
(FOR HENRYMAKOW.COM)


"And there, driving to work each day in the City of Angels, was this sign. A physical sign [Adopt-A-Highway  Atheists United]. It could have easily said 'You will now be attacked by Satan.' 'Entering this industry, you are now on the highway to darkness..." -Billy Ray Cyrus

If he only knew the extent of it and what would happen to his daughter. But too late.

The Hannah Montana sensation has a back story we've heard before. Father Billy Ray Cyrus, country singer, sacrificed his daughter to the Disney machine and it's chewing up their lives. Nothing new about that.

Only he's saying something.

GQ's recent interview with Cyrus has this intro:

"These days Billy Ray Cyrus's life is imitating a bad country song: He's headed for a messy divorce, his record company just delayed his latest comeback, and his cherished 18-year-old daughter seems destined to rip bong hits at every party in the U.S.A. No wonder he's muttering about the end times." 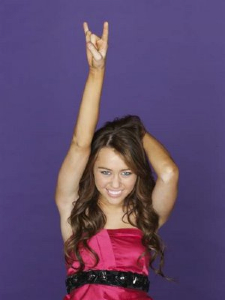 Billy Ray apparently understands what's happened and tells of his inability to get past Miley's "handlers." He "spoke to one of the handlers" asking what's going on. He was referring to a You Tube showing Miley using the the drug Salvia.

"They told me," he says, his contempt and despair still naked and fresh, "it was none of my business."

He goes on later, anguishing over her apparent sequestration: "I feel like I got to try. It's my daughter. And some of these handlers are perhaps more interested in handling Miley's money than her safety and her career."

"I'm scared for her. She's got a lot of people around her that's putting her in a great deal of danger. I know she's 18, but I still feel like as her daddy I'd like to try to help. Take care of her just a little bit, to at least get her out of danger."

When asked if he thinks his family is under attack by Satan, Billy Ray says, "no doubt. There's no doubt about it."

"I'll tell you right now -- that damn show ['Hannah Montana'] destroyed my family. I hate to say it, but yes, I [wish the show never happened]. For my family to be here and just everybody okay, safe and sound and happy and normal, would have been fantastic. I'd erase it all in a second if I could."

In fact, it is this late-in-the game, hands-off attitude that Billy Ray regrets the most. He claims he didn't profit from his daughter's success, except for his role as an actor.

How sad, but he knew better, and admits it. The price of doing business in that industry is your soul....and your mind.

The interview then takes an eerie detour as Billy Ray tells his own tale of needing to get away from it all, prompted by the death of Kurt Cobain, with whom he was friends. He also mentions trying to help Michael Jackson and Ana Nicole Smith, two definite MK Ultra subjects.

The TV series Hannah Montana stars Cyrus as a girl who lives a secret double life - an average schoolgirl by day, and the titular, pretty-in-pink (and occult purple) pop star by night.

The splitting of Miley is demonstrated by her alter's name - Hannah is the same backwards as forwards, reminiscent of the constant mirroring we see in pop videos - and by their different hair colors (further dark/light checker­board symbolism).

The fact that Miley/Hannah has often been seen sporting butterfly symbols on her clothes, access­ories and website pretty much clinches it for one blogger:

"She is literally (in terms of her MK programming) some form of corporate global Lolita robot" being used to socially engineer teenage girls for their role as Illuminati sex slaves and ... breeding stock.

The Cyrus interview is somewhat disjointed, and you get the sense he may be playing out his scripted role and personality for the interviewer.  It's not dishonest sounding, but there's this haunting sense that something is being staged. Is he also a subject?

When that good ol' boy country stuff meets Hollywood, you don't have to guess who's gonna come out on top.

Thanks to Sean for the tip.

I read the BRC article in GQ myself, slowly - all six pages - twice. It is quite apparent to me that yes, BRC was indeed handled. Yes, he was probably even mind controlled. No doubt, all the while, he was just doing what 99% of the folks in show biz do: what they are told to do in order to keep bigger and bigger and bigger paychecks rolling in.

However, it seems to me that by divine intervention, BRC broke chains of control that they had over him. Now, he's in despair but he has to be patient; if he asks God for help, help will be received. What he needs now is help from those of us that are aware; I really wish there were some way that I could reach out to him... reading the article, I felt called to do so. I never understood what that meant years ago, but i do now.

I write from experience of my own as a musician. I'm not saying that I was mind controlled, but most certainly, when I walked away from the Lord and indulged of that lifestyle, for a while it seemed very fun. But it did not take long for everything to fall apart, especially when I became aware of my own spiritual dire straits. It was as if I were being attacked by the darkness; everything was thrown at me, from debt to drug addiction to sexual addiction.

Today, it's quite clear to me that all of the pitfalls I endured were spiritual attacks designed to make me completely hand over my soul, once and for all. There are certain things about me that brought me to the conclusion that, especially since we're talking about the spiritual side of things, it's not beyond the realm of possibility that perhaps the ominous powers-that-be know of my existence and deliberately laid traps for me. Regardless, in my darkest hour, I asked god for help. That same day, things began to turn around. I now know my own destiny and my purpose in this world. And while I do get frustrated, I understand I must be patient.

Thanks. I would also like to pass along this Pseudo Occult Media blog posting regarding Miley and Noah. It's very in-depth and eye opening, and makes it pretty clear what's going on in their situation. Worth a look for anybody who's interested in this subject, or for the average person who isn't aware of this stuff:

See the second comment on the Miley story? Go to the links---WOWWW! The info about the younger sister--yikes--this Billy Ray has got to be in some sort of mind control stupor....he's blind as a bat and just stuck in the country boy mode, glad I made that point

the first POMedia link has great comments at the end of it as well.

...the mind control issue always haunts me, it's so sinister and so much more prevalent than people could begin to realize. It's really all or nothing at all--you see the big picture and get the hell out of it with your mind and body as fast as you can, or you're a subject in some shape and form to various extents---it's an elastic, electric strangling spider web of deceit getting furiously pumped at us and you can't sit still but have to keep swinging your sword to cut the damn crap off yourself and anyone else you can help.......good God....

Hi Henry, read with interest the recent revelations of Billy Ray and his lamentations about allowing Miley to be on the "Hannah Montana" show and what Hollywood has done to his family. However what's even worse - and what's oddly left out of his lamentations - is the situation with his other, younger daughter Noah, who is even worse than Miley. Your guest article posted a link to Pseudo Occult Media (POM for short). Well, POM has a great write up that outlines the situation with Noah:

Scroll down a little bit to get to the truly disturbing material. Noah dressed up as a stripper hanging off of a pole with other little girls; wearing makeup and racy ensembles; seeming to be paired up as a "twosome" with her best friend Emily, who in turn is dolled up as a sex kitten and a black winged angel with horns, among other fanciful costumes. Noah was only about 8 or 9 years old in these photos. Emily was even younger.

Miley may be taking bong hits of "salvia" at the legal adult age of 18, but Noah is a far worse situation because she's so much younger and clearly being sexualized in a way that even Miley wasn't. There's also a brother in this clan, Trace Cyrus, who seems like a lost soul tool as well: http://www.google.com/images?hl=en&sugexp=ldymls&xhr=t&q=trace+cyrus&cp=6&um=1&ie=UTF-8&source=og&sa=N&tab=wi&biw=1152&bih=575 The whole family's a mess, just like he said. But it was a long time happening.

Billy Ray was present for this photo shoot, and appeared in some of the photos themselves, which were not well received by the public to put it mildly....so why didn't he speak up? oh well. At this point his biggest concern should be Noah, since she's still so young and in a very vulnerable position. If those pics of Noah featured at POM are any indication of things then she's already in some serious trouble.