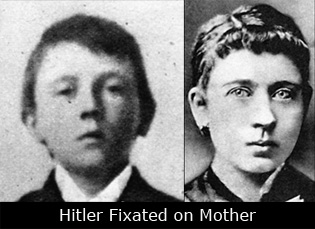 Hitler's sexual dysfunction was responsible for war and his persecution of the Jews, according to Kurt Kreuger M.D. who claims he was Hitler's psychiatrist from 1919 to 1934.

I stumbled on his 1941 book, "I was Hitler's Doctor" not suspecting he was a psychiatrist. I wasn't prepared for the intimate revelations, including one that Hitler hated Jews because a grocer named Sachs had "desecrated" his mother.

Professor Robert Waite says the book is a hoax. There was no Jewish grocer in Leonding and Kreuger couldn't possibly have remembered pages of intimate conversations verbatim. ("The Psychopathic God," p. 434)

I don't know about the grocer but it seems to me that after treating a very special patient for 15 years, a gifted man like Kreuger could reproduce his words. Hitler's problem with women is widely known. Also, the Introduction was written by Otto Strasser (who helped Hitler build the Nazi Party);  Upton Sinclair wrote the Forward, and a retired military psychiatrist wrote the Preface. Would they have lent their names to a hoax?

"I Was Hitler's Doctor"  exposed in 1941 many aspects of Hitler's career and character that are little known even today. Hitler was impotent. He was a homosexual and bisexual. He had been Capt. Roehm's lover. He was employed by the army to monitor rabble rousers. He met regularly with Steel Baron Fritz Thyssen.

Despite all of this, Kreuger's portrait of a man trying to heal himself is quite sympathetic. I am not going to swear by the book's authenticity but I'm not going to ignore it either.

In August 1919, Hitler sought help from Dr. Kurt Kreuger for impotence. He attributed the problem to syphilis.  Krueger soon determined that Hitler's syphilis was in remission and Hitler's impotence was due to an unhealthy attachment to his mother, Clara Polzl Schickelgruber. (His first memory was her breast which represented "warmth"; he watched her dressing and wished to displace his father. pp. 105-112.)

His mother was 35-years-younger than her husband, who was also her uncle.  Quite likely her love was sublimated in her son, warping him for life. "We slip out of of the maternal womb, all of us; but only a tiny fraction of us returns to the womb in adult sexual intimacy," Hitler tells Kreuger.

On the other hand, Hitler subjected his 15-year-old niece Geli Raubel (daughter of his half-sister) to unspeakable humiliations and then murdered her when she rebelled. The source is Otto Strasser who says his brother Gregor prevented the distraught Hitler from committing suicide afterward. (Significantly Hitler refers to Geli as "that Jewess," confirming the belief that his father was half-Jewish. p.236)  Many of Hitler's love interests committed suicide.

According to Kreuger, Hitler saw the world in terms of his maternal attachment. He woke up one night to his mother's laughter and followed the sound to the garden. There he found the "fat Jew" grocer Sachs "desecrating her naked breasts with his fat paws." His awe of his mother was such that he withdrew to his bedroom and threw up.

"As for that damned Jew, I promise you I'll make every German and Austrian Jew pay for that piece of infamy. Heads will roll -- and if that garden still exists...it will know a red dew." (270)

Yet in a bizarre twist, he also associated Jewish women with his mother. Sexual congress to Hitler "meant a Jewess, and without a Jewess no such thing can possibly take place." (256) This was because, as with incest, sex with a Jewess was also a taboo i.e. racial defilement.

After Hitler became Chancellor, he fell in love with Jewish actress Gita Alper. Kreuger told him: "Gita has become your perfect love-image because of ...her maternal tenderness that has an hypnotic effect on your Psyche. You can love the mother and still feel you are not committing incest."  (230)

"Hitler's failure to find a mate is at the core of his failure as a human being, and is the source of his demonic, destructive spirit,"  Kreuger writes. (236)

Is it too facile to think that Hitler's need to conquer and destroy was affected by his impotence and sado-masochism? Was war a perverse form of sexual conquest?

Obviously, this is a Freudian perspective and possibly Kreuger wrote a sensational Freudian fantasy. However, the book could be authentic and might provide a new dimension to our understanding of Hitler.

I think it`s a great article and you should go into greater detail on this subject.People who don`t like what you said here are fags themselves.The connection between sexual perversions and political power is the key to the understanding of what goes on.Fags rule the world,simple as that.

"Homintern is the Party of parties and the Alliance of alliances".

It seems that you have allowed exciting speculations to override your usual good sense.

It is most probable that Hitler's hatred for Jews derived from his experiences in Vienna and his failure to get into the art school, controlled by Jews. But the general environment in Vienna was hostile to an earnest provincial aspiring artist who was not "in" on the Jew-controlled cultural development. Examples of Hitler's art reveal a talent with metaphysical comprehension.

In 1850, there was a Â½ % Jews in Vienna. In 1880 the Jews constituted 10,5 %. You can say what you like about Jews (if you're prepared for a few years in jail) but Jews don't normally breed like rats. In Sigmund Freud's "Civilization" we learn that sublimation is basic to civilized conditions. Worldly Zionists excepted, Jews are a civilized bunch. Sleazy academics have romantizised this ebullient period as Fin de SiÃ¨cles, where traditional art was hijacked in much the same way that worldly Zionism has hijacked Jewry.

And the stereotyped Freudianism in the book is suspicious. And Hitler's foreign politic is well documented and it doesn't support the infantility reported in Makow's posting.

It seems to me that this work is another Jewish hoax.

In regards to Hitler's sexual problems, it seems to me that certain powerful groups use molestation to control their pawns. Have not the Jesuits been sued many, many times in the U.S. for many millions of dollars for molesting boys?

Have these acts not repeatedly been covered up by higher ups, almost as if these priests were doing what was expected of them? Of course other groups who go so far as doing human sacrifice for sake of some esoteric power would seemingly do molestation also, both for a feeling of power as well a way of dominating another's will.

Phillip of Macedon, Alexander the Great, Ghengis Khan and some of the Caesars were at the very least gay at least at times. It would seem almost axiomatic that people with extraordinary power and influence are apt to be tempted by every vice, and that some unscrupulous people would use these vices to gain influence or control over them.

There is of course blackmail potential, the possible deprivation of one's secret addiction, as well as withdrawal of approval or affection. Intimidation and psychological reinforcement of the pawn as a slave/victim could play a part. There is also the notion of sin-either one is going toward God's grace or away from it, and if going away one gets more depraved. Then of course comes guilt, self-justification, and pure anger at self, God and the world.

I suspect there have been manipulators who were masters of men long before psychology was invented, and these manipulators are masters at staying in the shadows. Most of the men and groups blamed for the world's evils were indeed guilty, but they were also pawns of hidden masters. Satan of course is seeking to build a world-wide kingdom to supplant the kingdom of God and he can use any person who is out of the will of God.

Remember, Satan promised Christ ruler ship of the nations if He would just worship Satan. In time Jesus will literally rule the nations, but He was being tempted to get that rule early by Satan's hand.

Finally, the Hitler and Jews issue is overblown for two reasons. One was to drive Jews to Israel so Satan could use them to rebuild the Temple in order to install the Antichrist in Jerusalem.

Secondly, it provides cover for the fact that Satan was destroying the real Christian leaders in Europe, those who stood for the authority of Scripture and the freedom of one's conscience independent of Popes and priests.

No doubt people like Hitler are chosen because of their mental illnesses. My own experience with a Luciferian proves this. The book Political Ponerology also goes into detail on the physiological affects of fascism as discovered by Polish doctors pre WW2.

George Bush Jr is also known to have an "eccentric" personality with regard to sexual behaviours, as is Obama. Then there is Clinton. While these people are all just puppets, they need to be in the game and on side with the satanists.

Recent experience with politicians and fascism shows us that the book may be real.

After such a good run you denigrate yourself and the intelligence of your readers by publishing such rot and the absurd title, "Hitler's Psychiatrist Cited Sexual Motivation for War." As you know full well, Hitler did not want war. Both Hitler and Germany were pawns, and the War war planned almost a hundred years ahead of the event. Regardless of its authors, this article is an insult to your readers who expect better things of you.

There is any amount of stupid propaganda available on Hitler and WW II. Please exercise some discernment and concentrate on the TRUTH even though you know full well the Jewish Human Rights Commission that is apparently still persecuting you will not appreciate anything even approximating Truth. Nevertheless, you know they will never forgive and never forget what Truth you have published.

Generally speaking I enjoy some of your articles.
However, there are times when you hang your news on some unsubstandtiated garbage, like the Hitler story 16.6.09.

This sort of stuff pulls you down and is not the kind of material which makes people gasp. Maybe for air but not for that sort of news?!

It is trash and you know it. Not worth it to be published. Sorry.