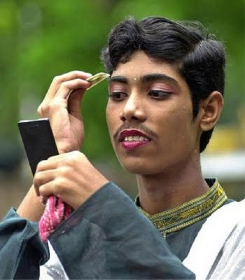 by Sam Peyo (in Brazil)

The Communist/Globalist agenda is moving fast forward in Brazil. The country is getting an A+ for all the items on the Illuminati (UN, CFR and Bilderberg) agenda.

If the international bankers want support for the global warming scam, Brazil is the first country to send money and experts and implement massive "information" campaigns in public schools, hospitals and the media without the slightest debate.

Brazilians--and that includes highly educated people--either believe global warming is gospel truth or simply wouldn't bother to read about it.

When the swine flu vaccine was made available, health authorities simply instructed pregnant women, children, senior citizens to receive their shot. No one would dream of questioning whether the vaccine was safe, efficient or even necessary.

Brazil is also an example of combating AIDS because of an efficient condom and drug distribution strategy.  Never mind that a traditional lifestyle might reduce the problem significantly.

When it comes to promoting divorce, abortion and gay marriage, the "organic intellectuals" (right out of Gramsci's notebooks) and "beautiful people" who dominate the media, government, universities, justice and cultural life, slavishly emulate the latest trends in New York and Paris.

Now Brazilian public schools, the quality of which remains deplorable, are becoming centers for indoctrinating of children aged 7 to 10 years into homosexuality. As all cultural revolutionaries know, brainwashing is more efficient (and often irreversible) when started early in life.

Does it sound paranoid? Shouldn't children be taught the importance of tolerance and diversity? The problem is, the 2011 campaign against homophobia has nothing to do with tolerance.

In reality, as shown by federal congressman Jair Bolsonaro, now serving his fifth term (1991-2015) for the conservative "Progressive Party" (PP), it is a not-so-well-disguised incentive to indulge in homosexual behavior.

Bolsonaro has first-hand knowledge of what the Committee of Human Rights and Minorities and the Brazilian Ministry of Education are preparing for public school children.

As he explains in the video, 7-10 year old children will be watching films at school featuring 1) a boy who falls in love with another boy in a bathroom after he gets a glimpse of his genitals (later he sets a "good" example by becoming a "girl"), and

The initiative is justified by spurious figures from a survey exaggerating the number of 7-10 tear-olds with homosexual tendency!

Over the past hundred years or more, a minority of subversive and sexually deviant social engineers have been imposing their depravity on a majority of mostly unsuspecting Christians.

The 2011 campaign for the promotion of homosexuality among 7-10 year-old school children shows the Illuminati have shifted into overdrive. Immorality may now be peddled without the slightest concern for dissimulation.

Many years ago i came across your site and it struck a cord with me, you see i grew up in Ireland in the 70,s and had to leave in the 80,s due to lack of work, I made my way to Holland and could not believe the lifestyles that the people were living, at the time i thought it was great but deep down i never wanted it to come to my home country.

Gayness was in your face at all times telling you "its normal" and i was just a backward Irish lad with too much religious baggage to fit in.
No problem for me as i thought this is the way the dutch have been all along, Big mistake, i spent eight years traveling europe and every where i went it was the same story, gayness being pushed as "Normal"

At this stage i started to feel closer to my religion but did not really understand why, anyway it was time to go home to a "normal" country where if you were gay you stayed in the closet and killing babies was illegal, and we all went to mass on Sunday morning whether you liked it or not, you just did it because our families had been doing it for eons.

I got home in 95 just as the Celtic tiger began to roar, and i watched my country descend into the darkness of power and greed. laws were changed because everybody was saying how old and out of date they were ,everybody Irish wanted to be European and have their life styles, then the damage to the church began in earnest, day after day some new disgusting news about the church or some priest would be on tv, radio , print media etc.

I could not understand what was going on until i came across your web site and things started to fit together; it gave me the head start to do the research myself and now i know what is going on in this beautiful country of mine.

For ten years the devil ran rampant in this country stealing souls that had been out of reach for eons as we abandoned our faith for the glory of money and everything that came with it.

The Irish nation before the Celtic tiger was like one big family, we worked for the better good and we helped each other out as best we could.

No More, we now lock ourselves away in houses that we cannot afford and only care about ourselves, but what really prompted me to write this is the way Elton john and his Xmas baby have been accepted in this country as "normal"

It is a slap in the face to all good Christans for two gay men to bring a child into this world and the fact that it was done on Xmas day is an affront to Jesus Christ Himself.

My country is under serious attack from evil and nobody seems to care.