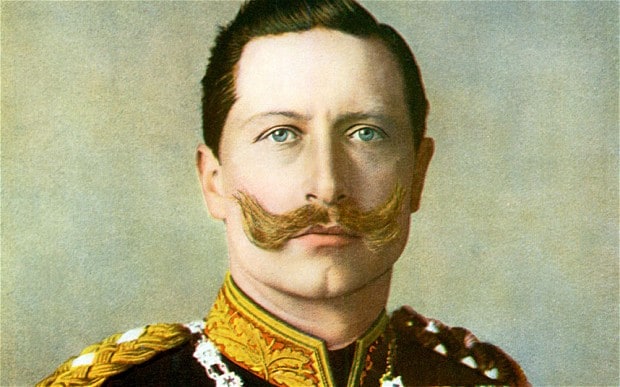 In August 1914, Kaiser Wilhelm realized he had been fooled:
"England, Russia and France have agreed among themselves ...
to take the Austro-Serbian conflict as an excuse
for waging a war of extermination against us..."
War is used to eliminate any nationalist resistance to
Masonic Jewish banker world hegemony. It expresses
their Talmudic hatred of humanity. (Also, they need to
constantly degrade and destabilize society to protect their
fraudulent credit monopoly.) Consider the needless
suffering they caused in both world wars. "Terror" is just
an extension of this ongoing war on humanity.
(Updated from June 9, 2009)
by Henry Makow Ph.D.

When we left off, we were exploring the proposition that the New World Order is the British Empire repackaged, and this empire was literally a marriage of effete British aristocracy and virile (or virulent) Jewish finance under the umbrella of Freemasonry.

Webster Tarpley is a gifted historian who generally eschews mention of Jewish bankers in favor of euphemisms like "Venetians."  Therefore it is unusual for him to state bluntly that King Edward VII was in the pay of the Rothschilds and was responsible for World War One.

Edward VII didn't become king until 1901 when he was 60 years old. As Prince of Wales, he was estranged from his mother,  kept on an allowance and was deeply in debt. He allowed a "series of Jewish bankers to manage his personal finances."  These included Baron von Hirsch and Sir Ernest Cassell. "Edward also cultivated the Rothschild and Sassoon families. In short, Edward's personal household finance agency was identical with the leading lights of turn-of-the-century Zionism."
(King Edward VII: Evil Demiurge of the Triple Entente & WW1.) 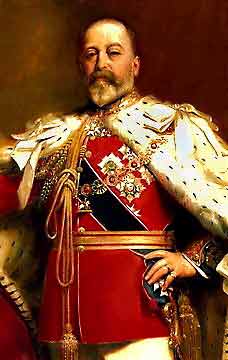 Tarpley is equally forthright in stating that "Edward VII, far more than any other single human being, was the author of the First World War...the most destructive single event in the history of Western civilization" which opened the door to Communism, Fascism, the Great Depression and World War Two.  Tarpley falls into the trap of establishment historians by attributing great events to single personalities. These personalities are invariably puppets of the people who pay their bills.

Tarpley goes into some detail about how King Edward and his Foreign Secretary Sir Edward Grey, the son of Edward's horse master, engineered World War One. Essentially, they deceived Kaiser Wilhelm into believing that England would remain neutral. To prevent the war, all they had to do was clarify this point. Germany would have backed down and reined in Austria.

In August 1914, Kaiser Wilhelm realized he had been fooled: "England, Russia and France have agreed among themselves ... to take the Austro-Serbian conflict as an excuse for waging a war of extermination against us...That is the real naked situation slowly & cleverly set going by Edward VII...The net has been suddenly thrown over our heads, and England sneeringly reaps the most brilliant success of her persistently prosecuted anti-German world policy against which we have proved ourselves helpless, while she twists the noose of our political and economic destruction out of our fidelity to Austria, as we squirm isolated in the net."

"England's" animosity against Germany was part of an agenda to use a catastrophic war to undermine Western civilization, and advance the Judeo-Masonic New World Order. Three empires disappeared in World War One while Communism and Zionism rose like the phoenix.  The following is from an Amazon review by DBH of Nick Kollerstrom's How England Initiated Both World Wars .
Several glowing accolades were spoken of Kaiser Wilhelm, who in his twenty-five years on the throne, had never gone to war, and Germany hadn't fought a battle in almost a half century. United States President Taft said the Kaiser "has been, for the last quarter of a century, the single greatest force in the practical maintenance of peace in the world."

Kaiser Wilhelm wrote despairingly in his diary (July 30-31st) - "Frivolity and weakness are going to plunge the world into the most frightful war, of which the ultimate aim is the overthrow of Germany" and the following statement 'the purely anti-German policy which England has been scornfully pursuing all over the world has won the most spectacular victory which we have proved ourselves powerless to prevent." 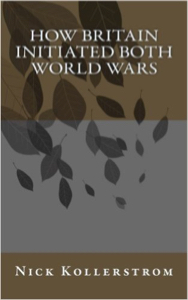 Germany couldn't escape from this onslaught. The Kaiser didn't really play any further role in the war once his final struggle to avoid war had been defeated and outwitted. He'd been outwitted by the British, by this clever double entendre of, will we/won't we.
From the author E. D. Morel, in Truth and War- "Those dreadful fields of senseless carnage as the soldiers were fighting on the fields of Flanders. We were fighting a country which had never threatened us in our entire history, and the flower of British youth were dying there".
Rudolf Steiner in 1916 made the following quote (The Karma of Untruthfulness- p. 84) - "Behind those who were in a way the puppets, there stood in England a powerful and influential group of people, who pushed matters doggedly towards a war with Germany, and through whom the way was paved for the World War that had always been prophesied."
Stewart Ross, in Propaganda for War (pp. 24, 47) stated "As passions cooled after the war, the gigantic lies created by Great Britain's and America's propaganda were one by one exposed to the light. The one true and perfectly authenticated 'atrocity' in the World War, and the situation which produced by far the greatest suffering and death among the civilian population was the illegal blockade of Germany, continued many months after the armistice."
Richard Milton, in his book Best of Enemies (p. 68), stated "The indelible memory of atrocity stories that had taken place only in the imagination of British propaganda agents proved to be stronger and more persistent than any facts. This curious discovery, the power of myths over facts, was the real legacy of the First World War." An infernal engine was created in war but impossible to switch off in peace.
The impetus behind war is the eradication of independent nations who apparently stand in the way of Masonic Jewish world government. We see this mechanism in operation today in the Middle East and menacing Russia.  In the twentieth century, the biggest obstacle was Germany
which was ravaged in two world wars instigated by the Masonic Jewish central bankers.
What a tawdry tale is modern history! Instead of grasping a greatness that is within reach, the human race is paralyzed by a psychopathic satanic cult, the Illuminati, empowered by the Cabalist (Masonic Jewish) central bankers.
---

---- "A Jewish Defector Warns America"
-------- Masonic Massacre on the Somme
First Comment from AZ - Is this the real motive for destroying Germany?
Thanks for your article on the extermination of Germany by evoking WWI. I actually believe that Germany from the beginning of the 19th century developed a high ethical and especially spiritual culture through the influence of many artists and philosophers. That influence was meant to liberate the human soul from the influence of the materialistic oriented science. It was meant to speak to the human soul and help him developing his unique individuality. The materialistic oriented science developed its growing influence at the same time. It has laid the foundation for the consumerist society that we live in since the second half of the 20th century.
The development of the German spiritual oriented culture was a threat to the banksters. They had since the 17th century done the best they could to conquer the world and by means of all kinds of geopolitical games, get all natural resources in their possession. The ultimate goal of their plan was and is to enslave humanity in debt, greed and endless consumerism. So to me the destruction of Germany through two world wars was meant to destroy a renewing spiritual impulse.

I really enjoyed your latest articles on the inter-marriage between Jewish finance and British Aristocracy. I published them as one article on my blog http://FoundingFather1776.com

One of the elements you touched on (and which I felt called for a humorous but significant picture) is the level of INBREEDING that has gone on among the Elite.

We know the Egyptian Pharaohs practiced intense intermarriage (i.e. brother & sister, etc.) and we know that the patriarch Mayer Rothschild himself demanded intermarriage:

â€œWhen he died on September 19, 1812, the founder of the House of Rothschild left a will that was just days old. In it, he laid down specific laws by which the House that bore his name would operate in future year.

â€¦â€¦(2) The family was to intermarry with their own first and second cousins, thus preserving the vast fortune. This rule was strictly adhered to early on but later, when other rich Jewish banking houses came on the scene, it was relaxed to allow some of the Rothschilds to marry selected members of the new elite.â€ Condensed from "Descent Into Slavery" by Des Griffin, Chapter Five

The whispered stories of the â€œbetter classesâ€ hiding away their insane and deformed progeny are legion.


I believe that the psychopathic practices of the Elite, their sadism, brutality and obsession with continuously increasing their power and wealth is at least partly explained by the widespread inbreeding that has gone on in the Illuminati families for generations. I also believe their occult practices figure into the equation.

Years ago, I used to raise cockatiel birds as a hobby. The â€œnormalâ€ cockatiel is a gray bird with only a splash of color on the cheeks. Pet stores can get more money for the all-white (albino) or all-yellow (lutino) birds or some variation thereof. To increase their profits, some breeders would breed father-daughters or mother/sons or brother/sisters to compound the trait they wanted. I thought the practice was abhorrent and I would not do it. The results, more often than not, was a visually striking bird that was completely unbalanced and insane. These birds would thrash wildly in their cages at the slightest disturbance, they would make the other birds restless, and they never made a nice, sweet companion pet bird which was ostensibly their purpose.

I find it ironic that the average person who mindlessly adores watching the â€œBritish Royalsâ€ or longingly wishes they were part of the wealthy nobility has no idea how sick & twisted â€“in both a physical and spiritual sense- most of those people really are!

Henry, i'll even go further and say that the sitting Queen is of winston
churchill and not of the loins of George VI. So....she is not the heir of
the crown......princess Margaret should have been.

THis is historic nonsense Edward VII was certainly not mentally deficient and the argument that he tricked the Kaiser is ludicrous. The kaiser wanted a war and had prepared for it for years even tricking his own government in massive armament budgets . THis suggests the ridiculous proposition that if England had only stayed out he could have conquered France and other countries and all would be well . Preposterous

Thank you so much for this information. I have long suspected that the British royalty and the Rothschilds were closely related. I think that their relationship is symbiotic in nature. I have also long suspected that the U.S. has been returned to the mastery of the British throne through the international banking system (1913). I can't help but think that the British royalty as well as the Rothschilds are descendants of Amalek and are fulfilling the prophecy of Balaam wherein he decreed that Amalek is the first (reyshiyth) of the nations or goyim. Yet, he is going to perish forever. This has all been prophesied to come about even as Isaac prophesied to Esau that when his descendants fought with Israel, the he would break his (Israel's) yoke from off his neck. Esau's descendants were prophesied to be the world leaders at the end of the age when the Savior will return to deliver His people Israel out of their hands.