Was Anti-NWO Activist the Victim of a Masonic Poisoning?

"This photo [now removed] is eight-years-old and does not resemble her at all now, but this is she," Philip Jones wrote Oct.3, just seven weeks before his death Nov. 24 of "pancreatic cancer."

She is D. Jensen, a Danish housewife with a Masonic and Intelligence background. Jones had a liaison with her last winter. He suspected she may have poisoned him with "vitamins"  of her own concoction.

This information is contained in an email sent to a friend, "LCV" who forwarded it to me.

"Dorte is a qualified Reiki Healer," Jones wrote. "In effect it is Witchcraft, and she is well versed in it...Dorte is also a qualified pharmacist assistant....she was feeding me many vitamins daily, which she was careful to take with her when she left. No evidence there."

"Dorte's father is a Freemason, and she is in thrall to him totally...[she] worked for two high level Freemasons and was very knowledgeable about the 'Craft.' Her husband works for NATO."

Dorte contacted Philip by email last Fall and pretended to be against the NWO. She appealed to Philip's acknowledged "Sir Galahad" complex by complaining about her loveless marriage.

"Her supposedly sad circumstances were irresistible to me... My infatuation with this seemingly vulnerable and sad lady started to become my own undoing."

They had a liaison last winter which ended when her husband and handler, gave her the DVD "What's the Bleep" for her birthday Jan 22 which seems " to have triggered something in her." A few days later, the relationship was over.

Jones remarked that Dorte spent an inordinate amount of time in the bathroom. He believed she was collecting "hair from my brush or something similar to concoct a potion or the like."

Dorte seemed to know how to manipulate him using love. She knew his "Achilles's Heel."

"As an adopted boy, I have always hated rejection, especially by those who profess to love me, which believe me, she did all the time..."

Jones found it bizarre that her husband was indifferent to the liaison. He also noted that Dorte had many sudden personality changes, typical of the mind controlled slave.

His friends suspected she worked for the Danish Intel Services as an operative. "She mentioned them a lot, of course from an adversarial angle but why would an ordinary Danish housewife be concerned with such matters at all? She might be an MK Ultra slave...after leaving she appeared very distant and quite a different person."

"Her own daughter wrote to me a week or so after...couldn't understand how her mother could be so in love with me on Saturday and then leave me on Tuesday."

THORN IN THEIR SIDE

Jones knew he must have caught the attention of the Illuminati: "Denmark is a severe control zone and I am the only one who is exposing it as such. I do so in the English language on an international level, which opens the place to outside interest."

In Oct. 2008 Jones set up the Chemtrail Action Group and held the first meeting Oct. 18. The same month Dorte began to write to him daily revealing many personal things in her life.

In Aug. 2009, Jones noticed a "tightening in his lower abdomen" and severe constipation. In Mid-Sept. he threw up violently after going out for lunch. "I am losing weight, feeling weak and am generally unwell," he wrote Oct 1. "I have always been very strong, and am rarely unwell, so this is a new and unpleasant experience to me." 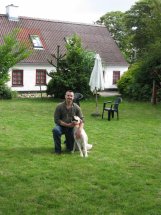 Evidently, the Illuminati perceived Philip Jones as a man of action, or perhaps they just wanted revenge. Ironically, he was going through a period of disenchantment and felt he had said his piece.

He had just written a ten-part "Nexus of Evil" series.

"I thrive on feedback and not much of that comes my way. And I do feel I have covered all the angles I pretend my expertise in, so what is there left to say?"

Although I helped Philip get started, I didn't follow his later work and continue to encourage him. My style is terse; his wasn't. He didn't see the relation between brevity and feedback.

Perhaps his disappointment with me is reflected in his comment,  "I can't really see the value in churning out the same stuff over and over again, as Makow does, so for the foreseeable future, I will be entirely unproductive. I have written myself to a standstill and it has clearly affected my health, and for what?"

Philip would have recovered his zeal. He was a fighter. We'll miss him.

Comments for "Was Anti-NWO Activist the Victim of a Masonic Poisoning?"

I am the brother of Mrs. D. Jensen, who apparently is mentioned on many websites...

First of all, i would like to say that i think it is very sad, that Philip had to suffer from cancer, which unfortunately killed him in a rather short time, and left his wife Ulla alone in their house with their dog Max. I very much hope for the best for Mrs. Jones in the future to come.

Philip was a man, who was clearly seeing what is really going on i our world today, and i had the pleasure to meet him in person in his own house a few times, and benefit from his knowledge. We also corresponded regularly by e-mail, and we shared many opinions, and so did my sister.

We (my sister and I) have been studying NWO, chemtrails, HAARP, mindcontrol a.s.o. for some years now, and we both hate the Elite for trying to manipulate and control us! None of us would NEVER try to harm those, who try to expose the Illuminati and their allies! And certainly not Philip.

Now i will correct what is said about my sister:

Mrs. D. Jensen HAS NOT poisoned Philip Jones!! When they were together, she bought vitamins for both of them. For example strong C-vitamins (C-Long from Matas), since Philip tried to save money by buying multi-vitamins for children instead of vitamins for adult use.
Vitamins do not cause cancer!

Philip was complaining of stomach pain even before he met my sister. And did nothing about it.

My sister and her husband are NOT Illuminati agents! Her husband is NOT working for NATO. He is designing software for many different purposes, and employed by a Swedish company.

Both my sister and I are coming from a working-class background. Our father has worked in the industry for many years, and is now retired. He has NEVER been a Freemason! We were NEVER raised in a mind-controlled environment! Ridiculous - we were ordinary working-class children with loving and caring parents!

My sister has had lessons in healing, and has never had any interest in esoteric subjects. For those who do not know: Healing is basically sending LOVE - nothing else.

It is all very simple: My sisters marriage when she met Philip at that time was not happy. Philip's marriage not happy either. They fell in love, and decided to be together. As time went on, my sister lost her love for Philip, took her things and went home to her husband and and children. Philip felt rejected, hurt and angry. So when he found out about his stomach cancer, he wrote to his friends about 'poisoning' by Illuminati agents. So said, and absolutely unfair to my sister!

My sister is a wonderful, loving and caring person, and i will NOT let anyone smear her in any way!

Poisoning? No! Just a man who badly wanted to be remembered.

This is a quote, which Philip used at the end of all his e-mails:

'Men are haunted by the vastness of eternity. And so we ask ourselves: will our actions echo across the centuries? Will strangers hear our names long after we are gone and wonder who we were, how bravely we fought, how fiercely we loved?'

Lastly I wish you all a Merry Christmas and a Happy New Year!

Philip must have been really really blind. Just the same thing all over again, money, fuck and power. As a keen thinker and a cop he should have known. Look at the info I provided as first check, not setting my eye on her.

The two sites where she can be found professionally have clear new age, esoteric, mind-control links, e.g. this http://krystalkuglen.dk/Aktuelle%20Links.htm and more specifically this http://www.teosofi-fyn.org/

The theosophic outfit was created in NY in 1875 through Helen Blawatsky, esoteric master and mason and is the theoretical foundation for new age politeistic "spirituality". She said they waited for the "great teacher", you can guess who. Look at the seal. It is all there right before your eyes right from the start. The christian enclosed in judaic enveloped in great satanic knowledge, propelled with ethernal winds of rebellion and revolution. About the same time all other subversional "churches" like scientology were funded in Brooklyn NY. Same people, same money, same root.

How could the good cop Phil be so blind? As always. Blinded through his dick.

Think how this odious crime can be stopped, maybe we should just publish the information I supplied someplace? wordpress, blogspot are obvious ideas, but there are hundreds of other.

Maybe the funeral is a good occasion to gather the people, what you think?