Illuminati Use China to Loot the West 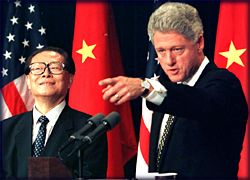 For a foreign power to get so much access in the West means that our nation states have been completely gutted.

Part One was - "Colonial Elite Rules China for the Illuminati"

by our Beijing Correspondent

The incredible scale of Chinese subversion in Western countries has gone virtually unreported.

It is most starkly revealed by a joint report on Chinese subversion between the Canadian intelligence services and police force published in 1996. Since the publication of this report, no steps have been taken to combat the subversion, a clear sign that it is Illuminati sanctioned.

The report deals solely with activity in Canada but applies to all Western countries. The report identifies the China power block to be a merger between the communists, Hong Kong tycoons and the triads. Their leader appears to be Hong Kong billionaire Sir Li Ka Shing.

By 1996, the cabal had reached a 'position in the Canadian economy that allows them to engage in intelligence activities, such as technology transfer, foreign influence and interference, identification and cultivation of persons favourable to China, and the acquisition of undue control in important Canadian economic and political circles.'

The process is simple. The cabal 'first buy a Canadian company so as to obtain "local identity", legally concealing their foreign identity. Then, the "Canadian" company invests heavily or buys other companies in various economic sectors.

'In fact, control lies in Hong Kong or Beijing, and the financial benefits or fruits of research, often paid for by Ottawa or the provinces, are likely to make their way to Asia.'

The businesses owned by the triads are 'used to pursue criminal activities, such as money-laundering and heroin trafficking, as well as assisting the ChIS (Chinese Intelligence Services).'

The report estimated that a staggering 200 Canadian companies -this was in 1996 - are under Chinese control, including some of the country's biggest banks and corporations; Merrill Lynch, Husky Oil, and the Canadian Imperial Bank of Commerce. 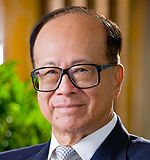 The same thing is happening in other Western countries. For example Li Ka-Shing (left) recently obtained two sensitive utility companies in the UK; EDF electricity that provides electricity to 20 million people and Northumbrian Water, who provide water to 4 million people.

The Chinese are currently buying vast tracks of farmland in Australia.

The report reveals that the cabal own large chunks of our cities. For instance, Li Ka Shing owns 'one-sixth to one-third of downtown Vancouver.'

They take advantage of under-reported "foreign trade zones" popping up all over the US. These are semi-autonomous regions exempt from US trade and customs laws. A reporter from Veterans Today called up the organizers of a FTZ being set up in his area and found:

'Corporations producing whatever they produce can manufacture and export products tax-free, but if the products made in the FTZs are sold in the US, taxes are paid!  By us!  It's like a reverse tariff!  Americans are punished for being Americans but foreigners get a free ride.  And "American" corporations get a free ride.' 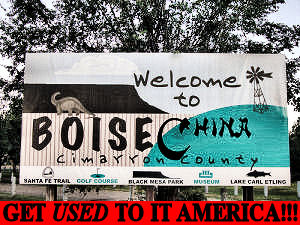 Chinese corp Sinomach, whose majority shareholder is the Chinese Communist Party, is planning a technology zone near Boise Idaho that would be 50 square miles in size. It would be a self-contained city encompassing manufacturing facilities, warehouses, retail centers and a large numbers of homes for Chinese workers.

Imagine it, a slice of China on US soil, what a way to further the 'End of Nations'! Will Americans allow this to happen?

China receives high technology from the West by a variety of means.

One conduit is universities who share the fruits of their research.

Professor C. William Kauffman is a professor of aeronautics engineering at the University of Michigan, working on military research programs. He claims his university is "transferring every bit of knowledge and know-how that we have to the People's Republic of China." This is achieved by allowing Chinese scientists and students' access to the research process.

Kauffman was incensed when a Chinese agent was appointed the head of his department. Wei Shyy was born in Taiwan but became a naturalized US citizen and built himself a very successful career in mechanical engineering. For decades he was a lead researcher on projects funded variously by the Department of Defense, NASA and the USAF.

However, throughout his career he has very publicly transferred secrets to China. Shyy has been guest professor at various Chinese universities engaged in military programs, including Nanjing University of Aeronautics and Astronautics since 1993, Chinese Academy of Sciences since 2000 and the Beijing Institute of Technology since 2003.

"How can he be allowed access to USAF [and] NASA technology and be a visiting professor at PRC institutions engaged in the weapons trade?" Kauffman asks. "This must violate 'deemed exports' and ITAR [International Traffic in Arms Regulations]."

In 2010 Wei Shyy left Michigan and became a professor at Hong Kong University of Science and Technology, taking decades of US technological development with him.

Western companies who are either bought by - or merge with - Chinese ones also transfer technology.

Michigan Senator Rick Synder owns a venture capital firm that bought NeoPhonotics, an American company rich in technological patents but low on manufacturing ability. He merged the company with a Chinese firm owned by the Chinese government. All those American patents are now Chinese!

However, such deals cause enormous controversy so the Illuminati prefer China to attain technology through illegal means.

The Chinese Run The Panama Canal

The Chinese control of the Panama Canal and use it as a smuggling route.

In 1997, Sir Li Ka Shing's company Hutchinson Whampoa attained two 25- year leases on the harbors at both ends of the Panama Canal.

Declassified documents from the US Commerce Department show that the Clinton administration stood back despite knowing that that Li has intimate ties to the People's Liberation Army (PLA).

Li co-owns companies with the PLA. For instance, 25 percent of "Guangzhou Aircraft Maintenance Engineering Company," a firm run by the Chinese air force and one-third of AsiaSat, a company owned in part by the Chinese army.

Allowing the cabal to own the Panama Canal, under the guise of a private corporation, is the perfect way to transfer hi-tech to China.

A intelligence report on Li's takeover concludes: "Hutchison's containerized shipping facilities in the Panama Canal, as well as the Bahamas, could provide a conduit for illegal shipments of technology or prohibited items from the West to the PRC, or facilitate the movement of arms and other prohibited items into the Americas."

The scale of Chinese subversion reveals how advanced the New World Order is. For a foreign elite to get so much power in the West means that our nations have been completely gutted and cannot be restored to a previous form.

Comments for "Illuminati Use China to Loot the West"

"A former systems security adviser to Nortel Networks says he has no doubt that extensive cyber attacks on the technology company contributed to its downfall. ... Brian Shields, the former senior systems security adviser at Nortel, said spying by hackers allegedly based in China 'absolutely' was a 'considerable factor.' ... Nortel is currently selling off assets in the wake of a 2009 bankruptcy filing. ... Shields has alleged that Chinese hackers had unfettered access to the former telecommunications giant as far back as 2000, downloaded business plans, research and development reports, employee e-mails and other documents. He maintains that Canadian companies — including Waterloo, Ont.-based Research in Motion — continue to be targets. ... Corporate espionage is a growing problem for North American companies, with the majority of attacks coming from China. Last November, a group of U.S. analysts said there were as many as 12 different Chinese groups participating in cyber attacks on U.S. companies and government agencies. During BHP Billiton’s hostile takeover bid for Saskatchewan’s PotashCorp, hackers traced to China targeted Bay Street law firms and other companies to get insider information on the $38-billion corporate takeover. Those same hackers also targeted Canadian government computers in fall 2010, targeting the Finance Department, the Treasury Board, and Defence Research and Development Canada, a civilian agency of the Department of National Defence." (CBC, February 15, 2012)

A year before Nortel filed for bankruptcy, Brian Shields "learned of a new kind of test, called a memory dump, he could run on PCs suspected of being infected. [He tested] two computers, which had previously gotten a clean bill of health from Nortel’s antivirus experts. Hackers had installed spyware on the computers and could control them remotely. ... On both computers, researchers found a particularly malicious and hard-to-spot spying tool, namely 'rootkit' software that can give hackers full control over a computer and enables them to conceal their spying campaign, according to two people familiar with the investigation. On one computer, hackers had set up an encrypted communications channel to an Internet address near Beijing. On the other computer, the investigators found a programme that hackers were likely using to sniff out other security weaknesses within Nortel’s networks. The hackers had created a 'reliable back door,' according to one person familiar with the investigation, allowing them to come and go as they pleased in Nortel’s network." (Wall Street Journal, February 14, 2012)

Shields now says, "It's very personal to me because I'm very sad-hearted about what happened to so many of my friends, to this once great Canadian company." Media coverage of the Nortel debacle elicited a scolding lecture from the Chinese embassy in Ottawa: "Cyberattacks are transnational and anonymous. It is irresponsible to prejudge the origin of attacks without thorough investigation and hard evidence." No offer of cooperation was forthcoming. In 1970,

John Diefenbaker asked: "What is the government doing? It has recognized Communist China. Well, I can just imagine the deluge of communist spies who will come in here attached to the Chinese embassy when it opens." The Chief was right!

I've been complaining to people about our industrial base being shipped piecemeal to China since I found out about the Overseas Private Investment Corporation in the late eighties.

Unfortunately, many, if not most of those I would complain to either did not believe what I was telling them, or worse yet, did not care. That still largely seems to be the case. As long as people get their Nike shoes and their I-pads, and can watch LeBron James and Tim Tebow on the TV, they don't seem to care where they come from, or how it affects their livelihoods. More people are aware of the problem now than were then, but still not enough of them to reach a tipping point. Oops, got to go-I don't want to miss "Dancing With the Stars!"

Steve Volk here. Great article on "Illuminati Use China." As you know, the real brains behind this is UN-food-for-oil scammer Maurice Strong who fled to China to avoid prosecution. The USA and Canada will begin to regain their dignity and economy only after Maurice Strong is dealt with. Until then, North America is more and more turned over to China. The recent oil deal Harper made with China was courtesy of, you guessed it, Maurice Strong! Strong is the scourge of Sovereignty of North American countries! At this point in world history, many articles need to be written on Strong's North American conquerings through China, or freedom is lost....