Illuminati Use Cancer to Hold us Hostage 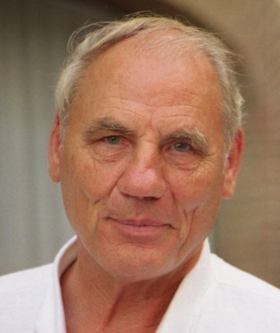 Dr. Ryke Geerd Hamer, left, discovered that not only cancer but all diseases are triggered by unexpected shocks and traumas. Thugs showed up and threatened that if he didn't disown his findings, things would become unpleasant.

In 1978, Dr. Hamer's son Dirk was mortally wounded in a shooting accident, shot by the crown prince of Italy. Dirk died 4 months later.

Six months later Dr. Hamer was diagnosed with testicular cancer. He had the cancer surgically removed.

Since Dr. Hamer never had been seriously ill, he wondered if the sudden shock of his son's accident may have triggered his cancer. While working in a large cancer clinic, he visited the ward with testicular cancer patients and began asking them questions. He noted that, prior to the diagnosis, every patient has had a serious conflict, or loss of a loved one.

He visited the ovarian cancer ward and the patients also had lost a dear loved one prior to diagnosis. He learned in the university that the testicles and ovaries were of the same embryonic origins.

Dr. Hamer then noted on brain CT scans that every testicular and ovarian cancer patient had a dark spot in the same location.  He concluded that not only cancers but all disease is triggered by unexpected shocks and traumas. Later he came to the conclusion that various related smaller emotional triggers can accumulate over years or even decades to manifest as disease.

In 1981, he submitted his findings in a post doctoral thesis at the University at Tubingen, Germany.  Within days, a couple of thugs showed up at his home. They threatened that if he didn't disown his findings things would become unpleasant.  Dr. Hamer refused. He had made a momentous discovery and had rigorously proved it.

Meanwhile Dr. Hamer and his wife were the target of constant harassment from the the powerful Italian Savoy family who were responsible for their son's death. Dr Hamer believes that this constant persecution eventually caused the death of his wife in 1985.

A few months later the University of Tubingen rejected his thesis without any testing or serious review.

They refused to accept the link between the psyche and disease.  Years later, the court ordered the university to test Hamer's findings. Despite this the university has never complied.

In 1986, court action was sought against Dr. Hamer for refusing to deny his discoveries. The court took away his license to practice medicine, told him to get another line of work and warned him not to speak to any cancer patients.

Nevertheless, he operated an underfunded cancer clinic and was having phenomenal success with a 92% cure rate in well over 20,000 cases.  Dr. Hamer maintains that modern cancer treatments are cruel, barbarous and unnecessary. He says that if he knew the truth back when he had his testicular cancer, he would never have asked for its surgical removal.

The persecutions became so intense that he fled to Spain, where he practiced.  Eventually he was arrested and falsely imprisoned. France extradited him for further persecution and imprisoned him for a further three years on ridiculous falsified charges.

Upon release, he befriended a French oncologist Dr. Claude Sabbah and trained him in what is called New German Medicine (NGM). Dr. Sabbah quickly learned NGM and was having the same success as Dr. Hamer. Dr. Sabbah in turn taught as many more physicians who were receptive.

Many Jewish MDs were helping their Jewish clients with NGM. However, they continued to use the dangerous and practically useless modern therapies on their goy clients.   Dr. Hamer protested this hypocrisy.  This is why the Jewish community labels him as an anti-semite.

Dr. Hamer has received official apologies from a number of Rabbis for the smear. However the stain remains on the many Illuminati sponsored websites that disparage and denigrate Dr. Hamer.

Various individuals and groups are plagiarizing  Dr. Hamer's  discoveries and failing to give him credit.  There are even some Christian groups that bend and twist his work to fit Biblical scripture.  From reports I have seen, they cause as much harm as good.  This is  because they haven't taken a single day of study to get a clear understanding.

The Illuminati's industrial medical complex have tried their best to cover up Hamer's findings.  But with the openness of the Internet, they have been unable to stop the tide.

"Thanks to Dr. Ryke Geerd Hamer for his extraordinary discoveries. They will change the way we conceive of illness.  If we lived in a just world, Dr Hamer should have been awarded the Nobel Prize in Medicine for his revolutionary work!" - Gilbert Renaud  Ph. D

Instead of the Nobel Prize, he has done prison time. He has fled from nation to nation to avoid the unrelenting harassment and persecution of the industrial medical complex.  Dr. Hamer has sacrificed leisure and comfort  to bring the truth to the world.

Today Dr. Hamer resides in an undisclosed location in a nation that has no extradition treaty with Germany.


Stephen Coleman, 54, is an alternative therapist in California

Also by this author, "Doctors Ignore Mental Causes of Disease"

Comments for "Illuminati Use Cancer to Hold us Hostage "

Beautifully-shot documentary about a

beginning in Alaska to investigate the

"The Gerson Therapy," a cure for disease

Chemo-Therapy is basically nothing else than controlled chemical warfare on a small scale. During WW1 and WW2 it was disvovered that -
surprise surprise - some agents like mustard gas ("lost") can kill cells. If you use a hammer and hit your toe you can also destroy cells.
But unfortunately until now nobody gave me a nobel price for that discovery.

"The first use of drugs to treat cancer, however, was in the early 20th century, although it was not originally intended for that purpose. Mustard gas was used as a chemical warfare
agent during World War I and was discovered to be a potent suppressor of hematopoiesis (blood production).[1] A similar family of compounds known as nitrogen mustards were
studied further during World War II at Yale University."

We have every year on average 450 000 new cancer diagnosis in Germany that means nearly every minute a new diagnosis. Considering the enormous amount of money what a cancer treatment costs (surgery, medicaments, morphine and so on) cancer-business is a very remunerative business for the pharmaceutical industry. Nobody expects seriously
that this industry voluntarily stops that business by finding a cure. The best thing would be if a public company would be founded which sells the most common medicaments at cost
price and which makes serious research. To give the health of the people in private hands (who only think at profit) is a very bad idea.

Well, the discovery of Dr. Hamer is that you don t have to destroy anything (in most cases) because every process in the body during a disease (he calls that "SBS" ) has a sense even if it seems to be dangerous. If you cure the healing-phase it is no wonder that people die - because of the therapy, not of the cancer. The most alternative therapies (e.g. eat crisp bread at midnight) are also no use but does no damage. And if the cancer vanish everybody thinks it was the crisp bread.

Nobod need to panic because of metastases, they don t exist. Its a horror story to herd people in the clutches of the pharmaceutical industry.

From "The five biological laws", a short introduction in the New Medicine:
http://www.whale.to/cancer/hamer2.pdf

...
The notion of microbes or metastases crawling around in our blood vessels (where they were never found)
is nonsense.

The tale of metastases is an unproven and unprovable hypothesis. To this day there has never been a
single observation of a cancerous cell in the arterial blood of a cancer patient. If cancer cells were able to
â€œswimâ€ to distant organs, they would have to do so via the arterial blood stream because venous and
lymphatic vessels only run to the centre, i.e. the heart.
In the German New Medicine, so-called â€žmetastasesâ€œ(which do not exist) are often the result of the panic
suffered through a diagnosis shock (iatrogenically induced) when a new DHS triggers a new biological
conflict.
...

I had the pleasure of meeting Dr. Patrick Quillan, former directer of the Cancer Centers of America in Tulsa, Oklahoma. In a lecture, he described their very cautious and limited use of surgery and chemo and radiation. They tried to focus on the physical as well as the mental and spiritual state of the
patient. When a cancer was observed as being certain years growth, say 10, it was often found that a traumatic event, death, divorce, or other tragedy had occurred at that time. Generally its believed that stresses so related, depress the immune system that normally keeps cancer in check. DR. Quillan authored a book, "Beating Cancer With Nutrition". Thankfully, there are good
medical doctors aware of what is going on. Some are persecuted more than others. Some are trying to get you really healthier, and to see them less. I admire Dr. Oz and believe he is in this vein, generally open and helpful-what a Dr. should be.

The list could be long of persons like Royal Rife, and Renae Cassie who worked in successful approaches to cancer, but because they threatened the "medical establishment" approach their lives were subjected to attacks and conflicts,
that were entirely devilish--morally and criminally wrong as is the case of Dr. Hamer.

Dr. Ryke Geerd Hamer story is one of tragedy and hope. Hearing stories like this makes my blood boil.

A year and a half ago I read a great book by the author of 'The Creature from Jekyll Island', G. Edward Griffin who wrote a great book on cancer titled 'World Without Cancer'. Griffin exposes the quakery of cancer 'cures' by modern medicine and the politics of cancer by the 'elite' in the second half of the book. In the first half of the book Griffin talks about a vitamin called B17 which has a phenomenal rate of destroying cancer cells. One of the highest concentration of vitamin B17 is inside the apricot seed.

Watch this video. It's a little outdated but brilliant:

G. Edward Griffin - A World Without Cancer - The Story Of Vitamin B17
http://www.youtube.com/watch?v=JGsSEqsGLWM

Since 30 years now they are hunting him down like a criminal across whole Europe. And his only crime is that he found 5 biological laws which allows a new undestanding of diseases (which he calls SBS, Significant Biological Special Program).

Here is something about him in English:

There is another doctor named Dr Edward Bach, whose approach to medicine is similar to Dr Haber's. He had a kind of divine inspiration and under this influence elaborated a dozen remedies based on wildflowers which one takes according to how one feels emotionally. His descriptions of psychological states are very detailed and show a deep understanding of human nature and empathy with human suffering, what one expects from a true doctor.

According to his system it does not matter what outward, bodily ailment one suffers from, what matters is to restore the psychological health and the disease will disappear.

He wrote a small book and the part coming before the description of the remedies is a must read as it describes the causes of human suffering and shows faith in the wisdom of the Creator and the spiritual nature of Man. I haven't taken any remedy in a long time since my health is good but there was a time about 15-20 years ago when I used his remedies to good effect. The Rescue Remedy is especially good for dealing with violent emotional upsets, sudden frights, etc. the kind of emotions felt during an unfolding disaster.