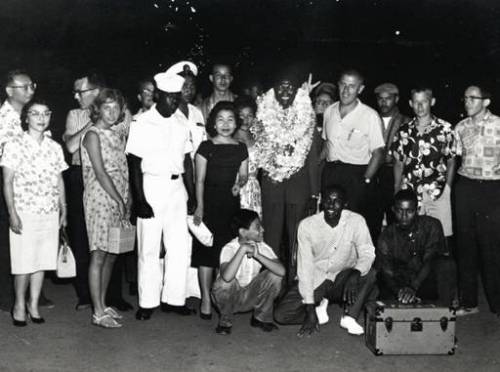 Obama's father and mother were supposed to have met in a Russian language course at the University of Hawaii in 1960. But the picture above shows Barrack Obama Sr. being welcomed by his future father-in-law, Stanley Dunham, at Honolulu Airport in 1959. They are seen standing next to each other as someone flashes a V-sign behind and between them.


Presidential Breeding:
The Making Of A Black President


By Clifford Shack
(Excerpt by henrymakow.com)

In 1992, at a Moscow dinner party, Tom Fife heard the name "Barack" for the first time. A Communist zealot told him that this child had been planned by the Illuminati Communist cabal to become the first Black President of the United States:

"Yes, it is true. This is not some idle talk. He is already born, and he is educated and being groomed to be president right now. You will be impressed to know that he has gone to the best schools of presidents. He is what you call 'Ivy League.' You don't believe me, but he is real and I even know his name. His name is Barack. His mother is white and American and his father is black from Africa. That's right, a chocolate baby! And he's going to be your president."

"He is already born" makes it sound like his birth was planned.

Barack Obama, Jr. is the product of an American mother and a Kenyan father. Just how did those two lovebirds come together? The official story is they met innocently in a Russian language class. But the picture above shows Obama's grandfather greeting his father at the airport in 1959. It is also believed that Barack Obama's mother, Stanley Ann Dunham and her father, Stanley Armour Dunham, both worked for the CIA. 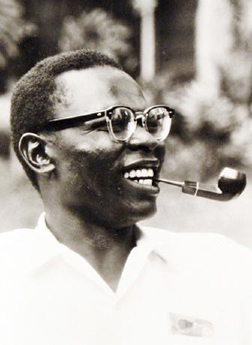 Why did the Illuminati choose Barack Obama Sr. (left) to father America's future Black president? Who was this man?

"In 1959, Obama Sr. received a scholarship in economics through a program organized by [CIA-supported] nationalist leader Tom Mboya. The program offered Western educational opportunities to outstanding Kenyan students. Initial financial supporters of the program included [Illuminati pawns] Harry Belafonte, Sidney Poitier, Jackie Robinson, and Elizabeth Mooney Kirk, a literacy advocate who provided most of the financial support for Obama Sr.'s early years in the United States, according to the Tom Mboya archives at Stanford University... When Obama Sr. left for America, he left behind his baby son, Roy, and his young wife, Kezia, who was pregnant with their daughter, Auma."

Who was Elizabeth Mooney Kirk? Was she CIA?

Stanley Ann Dunham and Barack Obama, Sr. were chosen by the Illuminati to parent a future black president. Dunham's father was a distant cousin of six previous presidents. She, being a white woman would also lighten the baby's skin making the child more appealing to American voters while at the same time dislocating their sense of racial identity. Barack Obama Jr. was born August 4, 1961. But the question remains, Why Barack Obama of Kenya?

A possible explanation is that Barack Obama Sr. (1936-1962) was the grandson of Theodore Roosevelt, US President from 1901-09.  After his presidency ended in 1909,  Roosevelt ventured on a year-long safari to British East Africa, on behalf of the Smithsonian Institute and the National Geographic.

At the turn of the last century, the British East Africa Protectorate was considered a "hot spot" for the European elite. Is it reasonable to assume that many a European gentlemen went back home to Europe or the U.S., leaving behind a little "black" secret? The Global Elite would make good use of some of these children. Those that showed promise may have been incorporated into more than one emerging African nation.

Perhaps one of those "secret" children would be an appropriate candidate for a non-African nation?  The Illuminati delight in devising ironic and elaborate long-term schemes. The Frankenstein-like breeding of a Black president is just one of them.

In an attempt to engineer America's first Black president, the Illuminati may have arranged a "marriage" for the Kenyan grandson of Theodore Roosevelt.

Habiba Akumu Obama, left, also known as Akumu Nyanjoga (c.1918-2006) was Barack Obama's paternal grandmother. Obama wrote that she was miserable in her marriage and abandoned her husband and children and subsequently married again and moved to present-day Tanzania.

Luos tribe people are given names related to the circumstances of their birth and Akumu means "mysterious birth".

She took the name Habiba upon her conversion to Islam. This photograph shows her holding her son, Barack Sr, on her lap. It is on the cover of President Obama's memoir!

Was Akumu "mysterious birth" the daughter of Teddy Roosevelt?

Whatever the truth, Barack Obama Sr. may have been chosen to sire the future President. The question is why him? Was he TR's grandson, or is there another reason?

A Closer Look at Obama's Dad

A good way to judge Obama:

2.) Father Was A Goat Herder -LIAR, he was a privileged, well educated youth, who went on to work with the Kenyan Government. Source: http:// www.godlikeproductions.com/forum1/message504435/pg1

3.) Father Was A Proud Freedom Fighter - LIAR, he was part of one of the most corrupt, violent governments Kenya has ever had Source:http:// atlasshrugs2000.typepad.com/atlas_shrugs/2008/01/obamas-oginga-o.html

4.) My Name is African Swahili -LIAR, your name is Arabic and â€˜Baraka (from which language. Hussein is also Arabic and so is Obama.

5.) I Never Practiced Islam - LIAR, you practiced it daily at school, where you were registered as a Muslim and kept that faith for 31 years, until your wife made you change, so you could run for office.

My oh my, if this were a Disney film, Obama's nose would be quite long.

Is anyone else struck by the fact that Steve Dunham has Obama's facial and head structure, body, stance and smile? Is this a test tube mix or a slight different combination than what we are led to believe.

Obama's granny is lighter than the common East African. As far her resemblance to TR... She is pictured in her twenties. You can't compare her youthful photo to a moustached old husky geezer TR but to youthful TR. I supply a few of those photos on the blog where the original article sits. Take a looksey there.

Henry: "But look at Obama. Who would believe his mother was white?"

Obama has a interesting family:

Anyhow:
During his campaign in 2008 he visited Berlin. 200.000 visitors, screaming and cheering and nobody have heard the name
Obama before. More visitors as Kennedy had in 1963. Can you imagine ? 200.000 idiots, cheering because the press said: cheer!
and nobody knew who this person is. But they celebrated him like a hero. Since this day it was completely clear for me: Just another Illu-puppet.

It is really frightening how much the press controll the thinking of the masses.

the following is just the tip of the iceberg:

First, it's funny how hard it is for researches to really get a bead on Obama Sr. The Roosevelt Theory is an interesting one, but it doesn't really seem to hold up too well. Look closely at the picture of Obama's grandmother. Attractive lady. But there's nothing about her that appears to be multi-racial. Have a hard time thinking that her father would be white, let alone Teddy Roosevelt. So, if one can't reasonably demonstrate
that she's his ( or some other connected white man's ) child, then the theory falls through.

The other difficulty is Obama Sr. himself. He looks quite African, and not at all European. Not saying it's impossible for him to have the European genes, but he doesn't appear to.

Perhaps there's a a native African bloodline that's part of the illuminist pedigree that we just don't know about. Hard to be certain.

What is quite clear is that President Obama is directly related to Stanley Dunham. Just gaze at Dunham's photos for a few minutes, and you can see that the president posesses his eyes, prominent chin, even those pronounced ears! It's kind of enjoyable to see the family resemblence so obvious there.

I have read before that the Powers That Be had a breeding program for a black president, but that Obama was only one of several possible candidates.

It's sad to me that America would need a breeding program for a black president. Why can't a smart, agile black mayor or governor just be ELECTED president instead? Maybe that's not in the cards for this country. Sad indeed.

I look forward to more on this discussion, but I hope someone with knowledge or new information can help answers some of these gaping questions because they have to be answered if this theory is really ever going to hold water.

But look at Obama. Who would believe his mother was white?