Palin exhibits ALL signs of  a Monarch Prog'md Mind Controlled, Beta-trained Sex Slave w/DID (formerly MPD) "Marionette" or (DOLL Prog'mg)  "Oz-Dorothy" Prog'mg... as well as  her children, especially Piper (degenerate pedophile elites prefer children.)  How many times, as she criss-crosses the country, have we heard her screech "Piper's here today!" (and who can forget the famous "hand lick")...Sarah plays traditional role in multi-generational MK family as Mommy "the presenter"...what does this say about Chuck and Todd? Fathers are ALWAYS  the first to subject victim to trauma via ritual rape/torture, causing "trauma- bonding"...

Sarah Palin was contestant no. (8) when she won 1984 Miss Wasilla Pageant,  no. (8) was also Todd's (handler/suitcase-pimp) snowmobile no. at that time --  given her birthdate 2/11/64 and the important role this "bloodline" Monarch was chosen for, it's very possible she was programmed by Mengele (Dr. Green a.k.a. Angel of Death) 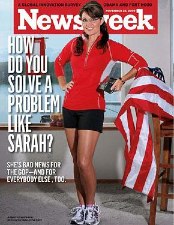 The media driven "fantasy narrative" surrounding Palin is Occult-Masonic w/Disney themes, re-enforcing Marionette (Doll prog'mg) as well as her obvious  Beta-sex-slave (KITTEN) alters. These signals are easily identified by players  in  global mgt team -- MSM non-stop coverage of  her "look"  (image) was specifically done to burn into minds of  public her image as sex-symbol.  Sarah's "doll-ification" was the work of  Gail Hodges Burt, whose hubby (former U.S.  Amb. to Germany 85-89) is senior partner in Kissinger Assoc., Inc.  -- Gail meticulously selected attire to re-enforce Sarah's "doll prog'mg"  w/lots of occult red/black, black/white, hair (beauty pageant doll styles) glasses, and of course the "ruby red slippers" (Dorothy Oz prog'mg) -- lately her palms are being emphasized -- these are all signals to global mgt. team that 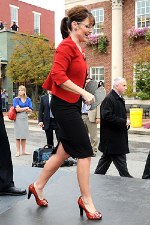 Palin is MK bloodline (hierarchical) like Cisco Wheeler, she has been groomed since birth, born into sinister  MK  system, genetically engineered to serve them ONLY! This explains her erratic,  almost schizophrenic behavior -- the children (esp. Piper) criss-crossing the country w/ her, indoctrinated in mostly ALL male political, military environments, w/Todd acting as "suitcase pimp"

...According to Brice Taylor, where ever global mgt. team members meet, there are ALWAYS underage MK's  for them to play with! Pedophila is  common among Presidents, and is the main tool used for blackmail. MK's have "photographic memories"  w/ alters tasked to record everything they experiance during sessions, then download their memory files...so, one can only imagine the immense power this gives someone like Henry Kissinger in the affairs of our government! ent team in luxury hotel suites and estate homes -- Palin's  front "alters" as  model/actress, beauty queen, news anchor, politician, outdoor's woman are obvious. First Palin images released to public were of her in stars and stripes bikini w/rifle, black leather micro-mini, then phony Vogue cover (she was featured, but NOT on cover http://www.vogue.com/feature/090108VFEA/?mbid=rss_feature  (note headline "altered states" referring to her MK'd memory files )  The public was being "mind controlled" to accept her as GOP pin-up doll, as a sex-symbol first, all her other talents (alters)  are secondary...which "mirrors" her prog'mg...

"She's going to learn at the feet of the master" - Rick Davis, McCain campaign spokesman 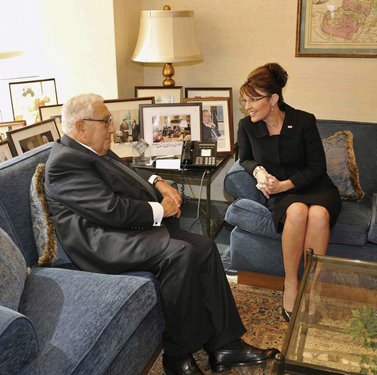 Palin was summoned  to NY  in 2008 to offices of  Kissinger Assoc.Inc., 350 Park Ave & 51st -announcing to global management team that  Alaskan MK-Kitten was under control of  "Dr. K" -- one of the most sadistic MK-Ultra Monarch programmers/handlers - "alters" created  from her "fractured mind" (remember shattered-glass reference during  intro speech in Dayton, Ohio -- 18 million cracks in the glass ceiling) had performed brilliantly, distracting electorate, allowing Rothschild/Rockefeller agents/banksters (Paulson & Bernake) to loot U.S. Treasury once again, triggering massive credit crunch, plunging American citizens into a never ending cycle of debt and despair.

Monarch Program coding (trauma/torture reinforcement) surrounding those MK's used in political realm is not as obvious as those in Hollywood or Music Industry...but can be plainly seen, IF you know what to look for -- because it's a formula IT NEVER CHANGES! Themes are occult-Masonic w/Disney overlays...Why? Because the two primary programming films are "The Wizard of Oz" and "Alice In Wonderland" Disneyland in California &  Disney World in Florida were well-known primary programming centers,  where children were subjected to sadistic , rape/torture/trauma trials - Disney Family is "bloodline" multi-generation satanists.

Palin's masterful performance at the RNC 2008 was just that...what the world witnessed was a multi-generational Monarch Programmed Multiple on auto-pilot... a human robt reciting a script loaded  w/emotional triggers, FEAR-BASED xenophobic code words, before an audience primed to love and defend every word...and it all worked brilliantly, because Zionist controlled media  (CNN, FOX, MSNBC along w/all other alphabet propaganda  outlets)  had programmed  the  audience (electorate)  for this precise event -- they ALL had 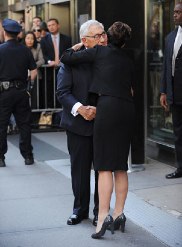 received their scripts and unanimously declared (speaking w/one voice) "A Star Was Born"...how Hollywood is that? -- "all eyes on her in the center of the ring, just like a circus" -- lyrics from MK'd Britney Spears "Circus."

After "Dr. K" uploads coded intel, she continues NY trip downloading intel to world leaders w/access codes at Clinton Global Initiative (Sheraton Hotel) just a few blocks away...where she joins other MK's from Hollywood &  Music Industry where her Beta-Kitten sex-slave  "alters" are used in  suites. NOTE: Beta-Prog Sex Slaves have "alters" trained for  "ANYTHING, ANYTIME, ANYWHERE w/ANYONE" who has codes...and protection alters for those who don't..."a man who doesn't value his life,  messes w/me when my master isn't around!"
---

In regards to Lady Lynn de Rothschild support for Sarah Palin I recall that she was an avid supporter and close friend of Hillary Clinton. Here's an article from Hillary's post-campaign days:

Thank you again for your continued exposure of the enemies of humanity.

35 years ago I left the Matanuska Valley after spending 7 years there sampling the adventures of Alaska.

There were no "great minds" in the Valley when I left and none came after I was gone. Just a bunch of average folks doing the best they could to raise their families and enjoying the experiences that the uniqueness of Alaska had to offer. Wasilla High School had no teachers of great intellect to influence any of its students to achieve greatness. So, where did Sarah get her training? Girls raised in Wasilla don't dress like Sarah. Most don't even own a dress, let alone high heel shoes. She had to have been tutored by someone outside of the community.

Who were the power people to promote her to the Alaskan voters for the governorship? And what group picked her as McCain's running mate? Who benefits from electing her to positions of power? The American women who think she's so great should check out her performance as a mother. Not good.

The American public is being deceived once again by the media. This nobody from nowhere will be presented as the feminine giant to save the American people from the evil Obama in 2012.

The elevation of women to roles of leadership in America is astounding. In 50 years our culture of millions of family units of mothers and housewives with dads working and leading our business, media, education, religious, professional, and government institutions has transformed to one of broken homes, displaced dads and children run by a bunch of narcissistic women. This has been done by purposeful planning and execution.

After having extensively researched The testimonies of Cathy O'brien (primarily on Ickes website) nothing can surprise me any more. The diabolical MKultra programming far exceeds the conditions a human being, much less a child, should ever be forced to endure, for any reason. Any conscientious observer can only earnestly yearn that the swift and certain judgment of divine providence be visited upon the practitioners of these heinous crimes.

Thank You for providing a valuable forum for the airing of unattractive yet essential stories, which we really must see in order to arm ourselves in the dark times ahead.