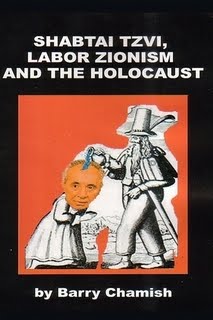 Israel is Named after Satanist's Son

Barry Chamish's book (left) documents how the Illuminati (Zionism and Communism) both originate in a 17th century Satanic Jewish cult.

The State of Israel, the military outpost created by the satanic Shabbatean-Frankist Rothschilds, was named after their great-great-great grandfather, Israel who happened to be the first-born son of Shabbatai Tzvi (1616-1676.)

They were able to get away with this naming for obvious reasons. Now, Israel ben Shabbatai was named after the grandson of the patriarch Abraham so...it should still have some meaning to y'all nevertheless,right? How do I know this you may ask? It becomes obvious when you realize that Shabbatean-Frankists are not Jewish.

For goodness sake, they pulled off the Holocaust! Understanding this, and knowing that Shabbatai Tzvi's son, ground-zero of the Shabbatean-Frankist breeding program, was named Israel...and that from him came the illustrious Rothschild clan...it's simple math.

Still don't buy it? look at my article about the second President of the state of Israel, from 1952-1963, Yitzak Ben Zvi. It's called "Father of the State of Israel."

Are the Illuminati a Sabbatean Frankist breeding Program?

Henry, the write up by Clifford Shack concerning the name 'Israel' is deceitful and outrageous.The name 'Israel' was given by Yahweh after fighting with Jacob all night.

Israel is the name Jacob received in the Bible.  Hence his sons, the 12 tribes, were referred to as Israel. While you may or may not believe the Bible story,  it is completely moronic to suggest that the country was named after some 'satanist jew' named Israel (a somewhat popular name for Jews prior to the formation of a modern country by that name).

Surely, the other commentators are correct that Israel (Ysra'el in Hebrew) is the name given to Jacob because he actually had "striven with God" as indicated by its literal meaning.


However, this word may also have ambiguity and I think that Clifford Shack has perhaps drawn our attention to its "occult meaning" that most people are unaware of: "Israel" can also be a "blended" word from IS(is) - RA - EL(lil) containing the names of three pagan gods/goddesses.  Isis is the Egyptian throne goddess; Ra is the Egyptian sun god; and Ellil (also referred to as Enril in the Sumerian-Babylonian time) is the Akkadian god of earth and wind.

Isn't that quite the Rothschild's way of deception?  No wonder why Satanists like twisted words.