Ivory Coast Crisis is About Oil 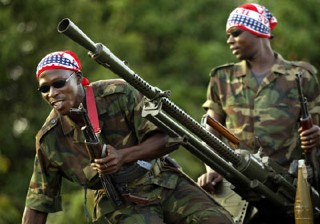 West African leaders delivered a final ultimatum to Laurent Gbagbo in person Tuesday after threatening a military ouster if he doesn't accept an offer to go into exile in a neighbouring country a month after the disputed election.

An unprecedented disinformation campaign is being orchestrated to justify foreign intervention in the Ivory Coast  to unseat the Preseident Laurent Gbagbo and replace him with Alassane Dramane Ouattara, a stooge totally devoted to the interests of multinationals.

Alassane Ouattara is the former Deputy CEO of the IMF, and former Prime Minister of Houphouet-Boigny who in 1990 administered an IMF plan which plunged the Ivorian people into a profound social and economic distress. He is the puppet" nominated" by the major powers to lead the Ivory Coast and to ensure that their interests are not threatened by the presence  of uncompromising and patriotic men such as Laurent Gbagbo, a long time opponent of Houphouet (1970-1990's.)

French and American imperialist powers have agreed to remove Gbagbo who is guilty of pursuing a national policy prejudicial to their profits.

After years of negotiations following the failed coup d'etats in 2002 and 2004 both orchestrated and financed by Alassane Ouatarra mentors (mostly composed of the French governing body as well as private investors but also African head of states such as Wade of Senegal and Compaore of Burkina Faso) the warring parties finally agreed to hold a presidential election whose second round was held last November 28.

The US and France" represented" by a UN mediation team  have  tried  to validate in every way possible an alleged victory of Ouattara. In defiance of the Ivorian Constitution which provides that the proclamation of election results is the responsibility of the Constitutional Council, this commission declared Ouattara winner without adducing any serious evidence.

The U.S., France, followed quickly by the Ban Ki Moon  of the UN have rushed to  recognize Ouattara as the new head of state of Ivory Coast.  The international propaganda machine soon launched a campaign to justify this action. Neither China or Russia, or India, or many countries in Africa, Asia and Latin America, which together form the 3 quarters of the world's population, had a say. 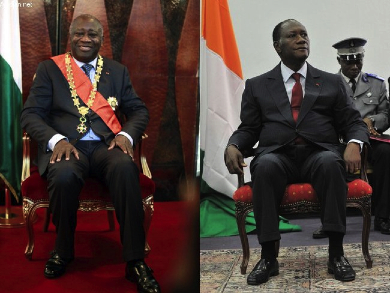 In short, the "international community" is composed of  those in the UN that have enforceable words namely The U.S., France, Germany, Great Britain; the same handful of colonial and imperialist powers that have precipitated people twice in two dreadful world wars to get their hands on the markets and fields of raw materials, oil and gas.

In the mass media Ouattara is presented as "the democratically elected and recognized by the international community after announcement of election results by the Independent Electoral Commission." When the Constitutional Council is referred to, news agencies routinely add the words "favorable to Gbagbo" to remove any credibility from this institution declared officially.

Everything is said and Gbagbo must leave "before the end of the week" threatens Sarkozy. The war perpetrator in chief who cannot forgive Gbagbo for opening the oil markets to American companies in 2002. It was a crime to have opened the preserve of French capitalists to others!

Another intolerable offense was that Gbagbo dared to open the roads leading to oil in the Gulf of Guinea to emerging rivals such as China and Russia! To inflict deserved correction, Sarkozy has rallied to the U.S to crush the recidivist offender Gbagbo and in the process any eventual nationalist leader that would dare frolic with" their oil reserves and minerals"

IT'S THE OIL STUPID

We would fully grasp the relevance of the Ivorian struggle once we have realized that the bottom line lies in the following question:  Who will control the oil discoveries off the coast of this country?

Who is the man to turn to for the perpetual control of Ivory Coast in its state of neo-colony, 50 years after formal the country formal independence was achieved without struggle and sacrifice? Beyond the Ivory Coast, the neo-colonialists are most afraid that this resistance spreads to former French colonies and that "La Francafrique" is led to affirm its desire for true independence beginning with the denunciation of the puppets of the great French bourgeoisie.

The slogan "respect the democratic choice of the people" is a mockery coming from the leaders of the imperialist powers which have orchestrated, covered up and sustained cruel dictatorships around the world as long as their capitalists 'businesses prospered.

In all cases, although Gbagbo has close links with the French Socialists, who have shun their zeal to defend the neo-colonialist, even if his past alliances allow small casts of doubt on the objectives he defends; the struggle that ensued between the imperialist powers and the great mass of the Ivorian people, appalled by the arrogance of the former colonizers still opt to no longer tolerate the domination and exploitation they have endured for decades.

This struggle is creating a movement that transcends all petty calculations of politicians.

They have served ultimately to act as a detonator in a region that has become a linchpin in the struggle for the energy resources in Africa. Imperialism wants to inflict a lesson on the people. It wants to cut short the Ivorian fight for freedom to deter other nations of Africa.

Assuming that Ouattara had won few votes at the elections with great financial and media support from his imperialists mentors, the historical legitimacy is not on his side. It is not on the side of the minions of the ruling classes.

Legitimacy is on the side of the people who shake the shackles of domination and leaders who lead them in their struggle. The great leaps toward progress are not decided at the polls.

Obviously, the struggle is just beginning in CÃ´te d'Ivoire.

Comments for "Ivory Coast Crisis is About Oil "

Thank you very much for enlightening the public about the conflict in Cote d'Ivoire. The world must understand the hidden reasons behind the shameful attitude of the West. They are ready to create war in the country despite the call for peace that is expressed by majority of Ivorians.

I doubt oil is the desired product over which war will be fought. Why? Economies are being contracted everywhere. There will be hugely reduced demand for petroleum, globally. Additionally, the price per barrel of oil is rising rapidly and this tends to curb consumption. And God will not be drawn into this particular conflict until several other things first happen.

The Ivory Coast is within the sliver of the earth that has been designated for future wars. This sliver includes most of North Africa and extends eastward to South East Asia. Countries within this designated sliver will soon experience greater destabilization, famine, population reduction, poverty and survivors will provide the cannon fodder for armed conflicts.

I am from the Ivory coast and I am very happy to see that you know the truth about what is going on in the ivory coast .

- there will be a mighty force from the US and the french and others peoples who will invade that country . it will be a 6 days war and hundred of thousand peoples will died

there will be a genocide in that country worse that the one in Rwanda . But this time God Himself will bring judgment on those who will attack that country to save his heritage

After six days all invading armies will be destroyed . And the all world will be stunned by what had happened in that country .

- this year is the year of the jubilee for must of the African countries . And if you know what it means you will know that God will not allowed anymore the Africa continent to be spoiled as it was in the past . This means the end of slavery for Africa including the Ivory Coast .

-God has his peoples in that Country ...This information i am giving to you know is to be keep for yourself and only to be publish after the invasion ....

Mr Makow you may believe it or not .....There are the truth Israelites ....( you call them the lost tribe of Israel .The truth Hebrew WERE and Has always been Black skinned people.) In that Country ...that is where there are

Please note that this fight is about economical raison but there is a very deep spiritual cause . mr dramane allassane ouatarra has changed his name to AllAh-Sane Ouatara

to stay close to Allah the god of the Muslim . Islam was the religion who the devil used to pursue the Egyptians among whom was the Israelites who flee from ancient Egypt to find themselves in south of west Africa . now if you see the map of the first round of the election you will see that the south part of Ivory coast who is Christian vote for mr Gbagbo . but the north Muslim who supported mr Alla-ssane and who was under the control of the French control rebellion vote for their leader mr alla-sane .

what is happening in that country is that God judgment of Nations will started in the Ivory Coast .

May God bless you .