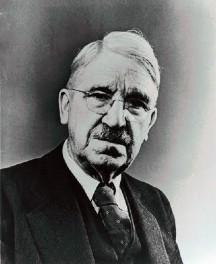 Illuminati Communism in Our Schools

No one has had a more pernicious effect on American education, and by extension the corruption of American society today than John Dewey. Born in 1859, John Dewey turned historic American values and logic upside down.

In Dewey's view, the individual existed only to serve society. "Socialization" (i.e., the individual's conformity to a group) was seen as more important than factual learning. This twisted view of education infected all of his work, resulting in a century of ever diminishing American academic achievement, with the resultant corruption of American society.

John Dewey received his doctorate from Johns Hopkins University about 1883, and joined the staff of the University of Chicago in 1894. In 1899 he was elected President of the American Psychological Association and from 1904 until his death in 1952, he was a professor of philosophy at Columbia University and Teacher's College in New York.

According to Dewey, learning was only relevant in context of what Society, and by extension The State, deemed necessary. The acquisition of knowledge for its own sake was regarded as a selfish indulgence.

Feelings and emotions were far more valid a barometer of a student's "adjustment" towards society than information, or the use of logic and reason. It should come as no surprise, then, that throughout most of his professional life, Dewey proudly wore the label of a "Social Progressive."

Dewey was a great admirer of Edward Bellamy's book, "Looking Back" (1877) which described a Utopian society built upon the ashes of capitalism.

According to Dewey, Government comes first and its needs must therefore be paramount over the individual. Society (government) shapes individuals, not vice-versa, claimed Dewey.

Incredibly, Dewey ridiculed the pursuit of knowledge for its own sake, declaring that knowledge was only valid and worthwhile if "society" decided so.

If the Powers That Be ("society") decided literature, or geometry, or chemistry is no longer a valid pursuit, but multicultural studies, minority oppression, and remedial basket weaving are, then the individual should have no alternative to that course of education.

Every virtue, including curiosity, resourcefulness, competitiveness, ethical conduct, right reasoning, rhetorical skills, logic and inventiveness --  could be considered to be "vices" overnight if the Powers That Be ("Society") decided they were no longer desirable.

In Dewey's world, there was no absolute truth. Therefore everything was malleable and changeable. There was no bedrock, no anchor upon which mankind might attach and secure their intellect, their character, or their conduct. Everything was continually in a state of flux, with the only constant being one's "duty" to society, to serve it however society chose to dictate through its institutions.

An emphasis on group participation, group learning, group problem solving and group activities hammered home the one unbending principle that the individual's  must always subservient to the "group."

Learning and achievement in any field of study, declared Dewey, was "selfish," the means whereby a child might separate him or her self from their peers.

Above all, Dewey wanted "top down" control of society. His philosophy was essentially the Rockefeller's, who sponsored the universities. Dewey wanted to create cogs for America commerce, just sufficiently intelligent to follow instructions. The goal of self-improvement were seen as a dangerous and detrimental deviation.

Children who differ from this norm leave themselves open to ridicule, hostility, sabotage and disparagement for being "different" than their group-herd mentality peers.

Comments for "John Dewey: Education Was Never About Learning "

just looked at Pt. 1 of L. C. Vincent's piece on John Dewey, and found it to be true as far as it went, which isn't very far. I've read John Taylor Gatto's book /The Underground History of American Education/, in which Gatto traces the beginnings of the movement toward compulsory state-sponsored education back to the 18th century, when European aristocrats learned of the power that Chinese mandarins and Indian Brahmins held over their social inferiors, and became jealous, and desirous of bringing about a similar situation in the West. Gatto goes over the history of public education in the United States, and convincingly makes the case that the elite class worked for a very long time to bring it about, with the sole purpose of bringing the lower orders into line.

Incidentally, everything that Gatto discusses can be found in the public record, even if much of it is rather obscure. This adds to the power of his work.

It's amazing how such a diseased psychopath is exalted by the so-called educational establishment. At University we were compelled to read his book Art As Experience, 350 pages of drivel.

The author Jonathan Swift is reported to have observed:

" You cannot reason a person out of a position they didnot reason themselves in the first place. So, if science is taught as just a collection of (assumed-to-be) facts, it is nothing but Dogma, Dogma stoutly resists subsequent displacement by reason. It seems anything people have learned prior to puberty takes on the status of an immutable truth ( This is something well understood by Parents, Government, and Religions) rational explanations of why some previous belief might be incompatible with the behavior of nature, and a careful explanation of the actual behaviour of nature, are of little avail."