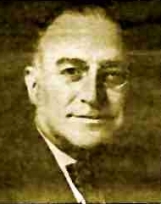 Excerpts from a long letter from Benjamin Freedman (left) to David Goldstein, dated October 10, 1954. Freedman (1890-1984) had been part of the American Zionist inner circle but, like Goldstein, converted to Christianity. The complete letter appeared in a pamphlet entitled "Facts are Facts." In spite of the centrality of the Talmud to Judaism, I doubt if more than 10% of Jews have read any part of it. These articles are as informative to most Jews as non-Jews.

The Talmud today occupies the same relative position with respect to those who profess "Judaism". The Talmud today virtually exercises totalitarian dictatorship over the lives of  "Jews" whether they are aware of that fact or not.  Their spiritual leaders make no attempt to conceal the control they exercise over the lives of so-called or self-styled "Jews". They extend their authority far beyond the legitimate limits of spiritual matters. Their authority has no equal outside religion.

The role the Talmud plays in "Judaism" as it is practiced today is officially stated by the eminent Rabbi Morris N. Kertzer:

"The Talmud consists of 63 books of legal, ethical and historical writings of the ancient rabbis. It was edited five centuries after the birth of Jesus. It is a compendium of law and lore. IT IS THE LEGAL CODE WHICH FORMS THE BASIS OF JEWISH RELIGIOUS LAW AND IT IS THE TEXTBOOK USED IN THE TRAINING OF RABBIS." (emphasis supplied).
( from What is a Jew?" "Look" Magazine, June 17, 1952)

... From the Birth of Jesus until this day, there have never been recorded more vicious and vile libelous blasphemies of Jesus, or Christians and the Christian faith by anyone, anywhere or anytime than you will find between the covers of the infamous "63 books" which are "the legal code which forms the basis of Jewish religious law" as well as the "textbook used in the training of rabbis".

The explicit and implicit irreligious character and implications of the contents of the Talmud will open your eyes as they have never been opened before. The Talmud reviles Jesus, Christians and the Christian faith ... You will have to excuse the foul, obscene, indecent, lewd and vile language you will see here as verbatim quotations from the official unabridged translation of the Talmud into English. Be prepared for a surprise.

In the year 1935 the international hierarchy of so-called "Jews" for the first time in history published an official unabridged translation of the complete Talmud in the English language with complete footnotes. What possessed them to make this translation into English is one of the unsolved mysteries. It was probably done because so many so-called or self-styled "Jews" of the younger generation were unable to read the Talmud in the many ancient languages in which the original "63 books" of the Talmud were first composed ...between 200 B.C. and 500 A.D.

The Soncino Edition of the Talmud with its footnotes is like a double-edged sword. It teaches the Talmud to countless millions of the younger generation of so-called or self-styled "Jews" who are not able to read the Talmud in the many ancient languages in which the Talmud was written by its authors between 200 B.C. and 500 A.D. It also teaches Christians what the Talmud has to say about Jesus, about Christians and about the Christian faith.

Someday this is bound to back-fire. Christians will some day challenge the assertion that the Talmud is the "sort of book" from which Jesus allegedly "drew the teachings which enabled him to revolutionize the world" on "moral and religious subjects".  The rumbling is already heard in places.

Tomorrow--Freedman's Citations from the Talmud

In response to the article "Jesus was NOT a Jew" I would like to stress that the Bible defines what a Jew is:

Acts 2:5
And there were dwelling at Jerusalem Jews, devout men, out of every nation under heaven.

Here Jews are described as devout men out of all people groups under heaven.

In Revelation (and throughout the Old Testament) the Israelites are defined as a people consisting of tribes, whereof only 144 000 are sealed and saved. In other words, Israel most probably is a physical racial group.

I think this is the reason why Jesus talks about Jews that aren't Jews but lie, and are a Synagogue of Satan. They claim Jewishness by blood and heritage, which is wrong biblically.

If those passages in the Talmud which defile Jesus and Christians, as well as gentiles in general, were commonly known to the world at large the Abe Foxmans, the ADL types, and the multitude of other such organization ram rods (who, contrary to media implications, have only a small following) would never manipulate for "hate crime" laws as is done world-wide today. Because they are obviously the most vicious haters on the face of the earth - even recording their hatred and how to put it into action in their religious "bible" - while, with media help again, they play the role of the institutional victim. The real victims, Jew and gentile, are unsung.

Unsung because those true abusers of mankind are, in large part, the same group who play the victim whenever they are ensconced in the seats of power and control. A perfect example being the top dogs of the satanically hateful and murderous last century of bolshevism in the soviet.

Anyone who thinks the same can't happen in the western hemisphere is not cognizant of what is being set in place before their eyes.