Henry Kissinger was a "Soviet" Agent 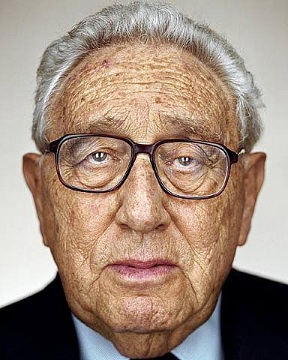 (Kissinger, left, the "face" of the Illuminati)


"Kissinger did many favours for the heirs of Stalin and Mao: telling president Gerald Ford not to invite Alexander Solzhenitsyn to the White House, for example, and making lavish excuses for the massacre in Tienanmen Square. He is that rare and foul beast, a man whose record shows sympathy for communism and fascism. It comes from a natural hatred of the democratic process, which he has done so much to subvert and undermine at home and abroad, and an instinctive affection for totalitarians of all stripes. ... Let this character at last be treated like the reeking piece of ordure that he is."

The reason why Kissinger "did many favours for the heirs of Stalin and Mao" is because Kissinger was a "Soviet" agent.  Starting in 1961, Michel Goleniewski an anti-Communist who infiltrated Polish Communist Intelligence, revealed that Kissinger was recruited into a special group known as ODRA while he was a sergeant in the US army during WWII.

Goleniewski exposed dozens of confirmed KGB agents in Western countries, who were tried and convicted. However, in the USA, Frank A. Capell writes "no action was taken on his information." (Henry Kissinger: Soviet Agent, 1974 p.3, 76-77)

Capell explains that Kissinger has always been a Rockefeller factotum starting with his receipt of a Rockefeller Fund fellowship when he was a student.

In other words, Henry Kissinger worked for both Rockefeller and the KGB. The Rockefellers are Illuminati central bankers. All intelligence agencies -- MI-6, Mossad, CIA, KGB -- ultimately serve the central bankers not their national homes.

We have de facto world government. The USSR was conjured up by the central bankers to create a Hegelian dialectic. This is why many Illuminati ("Soviet") agents like Henry Kissinger ( or the CIA's Barrack Obama) rise to the top of the US government with impunity. Kissinger was Secretary of State. This is why Putin and most of his predecessors come from the ranks of the KGB.

Cappel writes that the "Communists" (the first globalists?) gained power by internal subversion. "This required that key people in government be Communists, Communist agents or persons under Communist control through blackmail, bribery or other devious means." (109)

From from representing the "proletariat," these Communists represent the central bankers whose goal is to absorb all the world's wealth using debt created out of thin air.

When Nixon lost his bid to become Governor of California, he was befriended by Nelson Rockefeller who gave him a $100,000 New York apartment and a $200,000 a year salary. He became another Rockefeller factotum. Kissinger was his handler.


Hitchen's outburst against Kissinger was occasioned by his remark to Richard Nixon that:

" 'The emigration of Jews from the Soviet Union is not an objective of American foreign policy', The New York Times on Saturday quotes Kissinger as saying on the tapes. 'And if they put Jews into gas chambers in the Soviet Union, it is not an American concern. Maybe a humanitarian concern'." "Kissinger: Gassing Jews would not be a U.S. problem"

This remark (from newly released tape recordings) was in response to Golda Meir's plea for the US to put pressure on the USSR to release its Jews. The meeting took place March 1, 1973, just seven months before the outbreak of the Yom Kipur War in which the Soviets armed the Egyptians.

Kissinger also said of the Jews: "A people who have been persecuted for 2000 years must be doing something wrong?"

Kissinger was a Jew. How do we account for his attitude, if it was sincere?  The best explanation is that the Illuminati are Sabbatean Frankist Jews, a satanist heresy beginning in the 17th century. They captured half of the Jews of Europe and set them against the other half. They are noted by their willingness to intermarry with Gentile elites and mask their identity in order to reach positions of power. (Sound like Communists?)

It is also believed that Kissinger had foreknowledge of the Egyptian plan to attack Israel, and after the attack, delayed providing essential aid to Israel.

"Kissinger was willing to let Israel die!," one Jewish commentator wrote. [He] "has always had a reputation for being brutal and a hater of Jews -- even though he is a Jew himself!

Is this reflected in the Sabbatean attitude to Israel?

"The conflict in the Middle East is only to the advantage of the Illuminists. They HATE Israel, and hope one day to see it destroyed, and are biding their time. One of the olive branches offered by the UN when it takes over is that they will prevent war in the Middle East, and this will be greeted with joy by many. These people love the game of chess, and see warfare between nations as creating an order out of chaos."


ON THE OTHER HAND

Israel is a Sabbatean state and a future center of the NWO. It is inconceivable that the Illuminati would have let Israel fall in 1973, any more than they would have let Russia fail in 1941.

Perhaps 1941 provides an explanation for 1973. Stalin let Hitler attack the USSR and inflict immense damage, even though he knew about the attack. His goal was to weaken Russia and destroy its best men. Perhaps that was also the Illuminati goal in 1973.

We tend to see Israel as synonymous with the NWO. But it and Jews in general are only a means to an end. We mustn't fall for the deception that the Illuminati represent the interests of nation states. Their goal is to weaken and swallow up all nations in their world government. Thus they pit nations against each other in unnecessary costly wars. Their hatred of mankind knows no exception.

(Keep this in mind as you scan headlines about the war in Afghanistan and the potential for war in Korea, Venezuela etc.)

In conclusion, mankind has the wisdom and intelligence to fulfill its God given potential. Unfortunately, it is held hostage by a satanic cult, the Illuminati, made up of a corrupt Gentile elite enabled by Sabbatean Jewish financiers led by the Rothschilds. I'm afraid humanity is headed in the wrong direction.

Related: Kissinger Out of the Closet by Charlotte Iserbyt

Comments for "Henry Kissinger was a "Soviet" Agent "

The way to gaining and maintaining Satanic power is by making blood sacrifice. Someone has to die for the sacrifice. So it is that groups and nations are pitted against one another for maximum gore and bloodshed. The illuminati have apparently perfected this activity to a scale never before seen in recorded history.

You touch on a potential tinder-box here. More researchers need to understand the distinction between the Zionist and Masonic influences on our future. Horrific as the Zionists are, they are being used to perpetuate a situation for which, ultimately, the Masons have prepared a solution, at which point they will be put down like a rabid pet dog. The Zionists merely torture, murder, and commit genocide; the tribal mentality is obvious. The Masons have planned for humanity something far worse.

"Their hatred of mankind knows no exception".

That's just it Henry. We have been subverted by a force that hates mankind. I find most folk are like children in their disbelief in anyone wanting to hurt them. Let alone an ancient force that has been plotting and planning from time immemorial.

"Why would anyone want to do that?" I often hear regarding the horrors of the day.

Humans are like little children, not knowing that they are being preyed upon by a very deceitful and black force.

We need to grow up now and see what is before us.