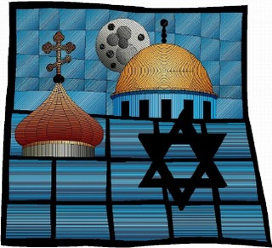 "Despite lingering suspicions among Christians, scholars accept that there is no anti-Semitic tradition in Islam," writes respected researcher David Livingstone, who is a convert to Islam.
What's important is that Islam offers a different approach to understanding the problem of "the Jews".  It criticizes them, but it still regards them as People of the Book, so they are a respected religious community, despite their vices.
So throughout history, in Islamic empires, Jews, Muslims and Christians have lived side by side.  Jews were even allowed to maintain their own Exilarch, and govern themselves according to their own rules, even if it was corrupted Talmudic law.I think it says a lot about God's great mercy, and there's a lesson there as well for all of us about how to treat others, even though we know they are in the wrong."

by David Livingstone
(for henrymakow.com)

Islam says Judaism initially benefited from Divine revelation but later turned its back on God. By "Judaism" we mean the Kabbalah and Talmud.

According to the Koran, God established a covenant with the Israelites and chose them above all the other nations, to act as His representatives on earth.

They were given 10 simple commandments, the spirit of which is summed up in the dictum: "do unto others as thou would have others do unto you,"  i.e., the Golden Rule.

And [recall] when We took the covenant from the Children of Israel, [enjoining upon them], "Do not worship except Allah ; and to parents do good and to relatives, orphans, and the needy. And speak to people good [words] and establish prayer and tithe." Then you turned away, except a few of you, and you were refusing. (2: 83)

The Koran then goes on to list the numerous favours allotted to the Jewish people, and reminds them of the tremendous miracles they were made to witness, and nevertheless, they continued to reject the true worship of God.

For centuries God sent prophets to warn the Israelites to stop worshiping the Canaanite gods, Baal and Astarte, for whom they erected phallic pillars, and performed human sacrifice and other abominations.

Finally, they were warned that if they did not desist, that they would be taken into captivity. That's what indeed happened at the turn of the sixth century BC, when Nebuchadnezzar took almost the entire population into captivity in Babylon, a period known as the Exile.

And We conveyed to the Children of Israel in the Scripture that, "You will surely cause corruption on the earth twice, and you will surely reach [a degree of] great haughtiness. (17: 4)

So when the [time of] promise came for the first of them, We sent against you servants of Ours - those of great military might, and they probed [even] into the homes, and it was a promise fulfilled. (17: 5)

It was in Babylon that a number of captive Jews committed the ultimate act of apostasy.  Instead of abandoning the worship of Baal, they incorporated it into a new "interpretation" of Judaism.

Eventually known as the Kabbalah, it included elements of Babylonian magic and astrology, and secretly regarded Lucifer as the true God of the Bible, equating him with the various ancient dying-gods.

But it was not all Jews who were responsible, but a group among them who apostatized, and as the Koran clarifies:

And they followed what the devils had recited during the reign of Solomon. It was not Solomon who disbelieved, but the devils disbelieved, teaching people magic and that which was revealed to the two angels at Babylon, Harut and Marut. But the two angels do not teach anyone unless they say, "We are a trial, so do not disbelieve [by practicing magic]."

And [yet] they learn from them that by which they cause separation between a man and his wife. But they do not harm anyone through it except by permission of Allah . And the people learn what harms them and does not benefit them. But the Children of Israel certainly knew that whoever purchased the magic would not have in the Hereafter any share. And wretched is that for which they sold themselves, if they only knew. (2: 102)

These apostate Jews then disguised their pursuit of world domination by claiming to be working to fulfill Bible prophecy.  Their mode of operation, based on Luciferianism, became the equivalent of the "ends justify the means".

But instead, they came to regard their moral responsibility to be towards only themselves, falsely assuming that being "chosen" meant that God preferred them above all others.  As the Koran says:

Say, [O Muhammad], "If the home of the Hereafter with Allah is for you alone and not the [other] people, then wish for death, if you should be truthful. (2: 94)

They thus further corrupted the concept to mean that their covenant was unconditional, and therefore, that God's promise of ownership of the land of Israel, or Zion, was forever-binding, and that they were eventually destined to rule the world, with the coming of their expected Messiah.

Essentially, the Jews lost touch with the true "Spirit of the Law", for which reason they were chastised by Jesus, who reminded them that the basis of the Law was to love one's neighbor, and that one's neighbor was any other human being, not just one's fellow co-religionists.

But though Mohammed's message came to correct the corruptions of God's message committed by the Jews and Christians, he foretold of the Muslims that they too would fall into every same error, "like a lizard into a hole".

And it has come to pass, Muslims too have now lost touch with the Spirit of the Law, and are therefore mired in petty controversies and oppressed by despotic rulers, failing to live up to the examples of true believers.

--
David Livingstone is the author of "Terrorism and the Illuminati." His website carries the same name.


Related- Jews in the Koran