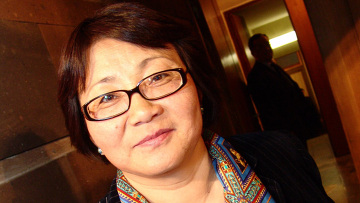 "With Roza Otunbayeva as now official head of a new Kyrgyz interim "people's government," there is reason to believe that Washington will not be dissatisfied with the overthrow of her former "tulip" partner Bakiyev. She has already confirmed that the American base at Manas will not be closed."


Abridged from  "Kyrgyzstan and the Battle for Central Asia"

In April of 2005, Der Spiegel featured a report with the title "Revolutions Speed Russia's Disintegration."In part it revealed the prime movers behind the events in Kyrgyzstan:

"As early as February," Roza Otunbayeva (left)- now the apparent head of the provisional government - "pledged allegiance to a small group of partners and sponsors of the Kyrgyz revolution, to 'our American friends' at Freedom House (who donated a printing press in Bishkek to the opposition), and to George Soros, a speculator who previously helped unseat Edward Shevardnadze's government in Georgia.

"Trying to help the democratic process, the Americans poured some $12 million into Kyrgyzstan in the form of scholarships and donations - and that was last year alone. Washington's State Department even funded TV station equipment in the rebellious southern province town of Osh." [8]

In June George Soros was obliging enough to confirm Otunbayeva's gratitude was not without foundation by stating, "I provided for Georgian public servants to get $1,200 a month....And now I am ready to support the creation of a fund like this in Kyrgyzstan." [9]

The two Georges - Bush and Soros - were not alone in fathering the "color" geostrategic transformations from the Balkans to the former Soviet Union and the Middle East. They received generous assistance from the likes of Freedom House, the National Endowment for Democracy, the National Democratic Institute, the International Republican Institute and other alleged non-governmental organizations.

A week after the "tulip" takeover the project director for Freedom House, Mike Stone, summed up the role of his organization with two words: "Mission accomplished." [10]

A British newspaper that interviewed him added, "US involvement in the small, mountainous country is higher proportionally than it was for Georgia's 'rose' revolution or Ukraine's 'orange' uprising." [11]

Assistance also was provided by Western-funded and -trained "youth activists" modeled after and trained by those organized in Yugoslavia to topple the government of Slobodan Milosevic in 2000:

Behind them all, deposed Kyrgyz president Askar Akayev identified the true architects of his ouster. On April 2 he stated "There were international organisations who supported and financed the Tulip Revolution in Kyrgyzstan.

"A week before these events I saw a letter on the internet signed by the US ambassador to Kyrgyzstan. It contained a detailed plan for the revolution." [12]

The Kyrgyz Tulip (formerly Lemon, Pink and Daffodil) Revolution was as unconstitutional and as disruptive to the nation as its Georgian and Ukrainian predecessors were, but far more violent. Deaths and injuries occurred in the southern cities of Osh and Jalal Abad (Jalalabad, Jalal-Abad) and in the capital of Bishkek.

It was also the first "color" revolt in a nation bordering China. Not only did Russia and China voice grave concerns over the developments in Kyrgyzstan, Iran did also, seeing where the trajectory of "regime change" campaigns was headed.

In the four decades of the Cold War political changes through elections or otherwise in any nation in the world - no matter how small, impoverished, isolated and seemingly insignificant - assumed importance far exceeding their domestic effects. World political analysts and policy makers asked the key question: Which way would the new government align itself, with the U.S. or the Soviet Union?

In the post-Cold War period the question is no longer one of political philosophy or socio-economic orientation, but this: How will the new administration support or oppose U.S. plans for regional and global dominance?

With Roza Otunbayeva as now official head of a new Kyrgyz interim "people's government," there is reason to believe that Washington will not be dissatisfied with the overthrow of her former "tulip" partner Bakiyev. She has already confirmed that the American base at Manas will not be closed.

Having earlier served as her nation's first ambassador to the U.S. and Britain, less than two months after the 2005 coup Otunbayeva, then acting foreign minister, met with her U.S. counterpart Condoleezza Rice in Washington during which the latter assured her that "the U.S. administration will continue to help the Kyrgyz government promote democratic processes in the country." [13]

Shortly after the March "democratic transformation," its patron saint, Georgia's Mikheil Saakashvili, boasted that "Roza Otunbayeva worked in Tbilisi in recent years and was the head of UN office in Abkhazia. During the Rose Revolution she was in Georgia and knew everything that was happening...the Georgian factor was a catalyst of many things going on there [in Kyrgyzstan]."[14]

From the U.S. perspective she appears to have reliable bona fides.

Russia has put its air base in Kyrgyzstan on high alert, though comments from leading Russian government officials - Prime Minister Vladimir Putin in particular - indicate an acceptance of the uprising which has already caused 65 deaths and hundreds of injuries.

But Russia attempted to put the best face on the revolt five years ago also.

Which direction the next Kyrgyz government takes will have repercussions far greater than what the nation's small size and population (slightly over five million) might indicate.

It could affect U.S. and NATO plans for the largest military offensive of the Afghan war scheduled to begin in two months in Kandahar province.

It could determine the future of the Collective Security Treaty Organization and the Shanghai Cooperation Organization, the two major potential barriers to Western military penetration of vast tracts of Eurasia.

The stakes could hardly be higher.