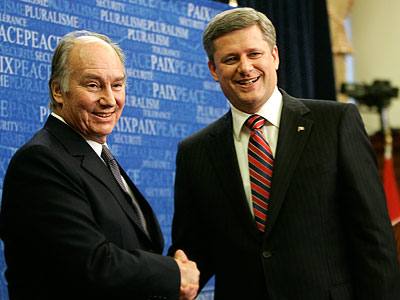 by David Livingstone
(for henrymakow.com)


The prominence of the Aga Khan family may be attributed to their long-term involvement in the  Occult and Illuminati-sponsored Muslim terrorism.

The Aga Khan is the hereditary leader of 15 million Ismaili Muslims who trace their descent directly to the notorious Assassins of Islam.  Many believe that the Knights Templars learned their occult doctrines form the Assassins during the Crusades.  In fact, according to Scottish Rite Freemasonry, the Templars "rescued" a number of "Eastern mystics", and brought them to Scotland, where their traditions were preserved.

Leading scholars of the Kabbalah, like Gershom Scholem, and more recently Nathaniel Deutsch, speculate that a lost Gnostic tradition survived among the Sabians (Assassins), before it was introduced to Southern France  and became known as the Medieval Kabbalah.  There, it spawned the heresy of the Cathars, from which the Templars emerged, and lead to the legends of the Holy Grail.

Terrorism is a foreign practice to Islam. The first instance of terrorism in Islam can be traced to the Assassins, derived from a heretical splinter group of Islam, known as the Ismailis.

The Ismailis devised grades of initiation, wherein the leaders could adhere to heretical Gnostic beliefs, while restricting the lower levels to professing some degree of orthodoxy. This allowed them to appear to defend the faith, all the while working towards its destruction, thus recruiting the lower ranks into undermining the religion they falsely believed themselves to be representing.

One of their first important leaders was Abdullah ibn Maymun, who, according to Nesta Webster, taught:

"Imams, religions, and morality were nothing but an imposture and an absurdity. The rest of mankind ­ the "asses," as Abdullah called them, were incapable of understanding such doctrines. But to gain his end he by no means disdained their aid; on the contrary, he solicited it, but he took care to initiate devout and lowly souls only in the first grades of the sect. His missionaries, who were inculcated with the idea that their first duty was to conceal their true sentiments and adapt themselves to the views of their auditors, appeared in many guises, and spoke, as it were, in a different language to each class...

By means such as these the extraordinary result was brought about that a multitude of men of diverse beliefs were all working together for an object known only to a few of them..."
The Assassins, were lead by Hasan al Sabah, who split off from the Ismailis, and succeeded in obtaining the fortress of Alamut in Persia, on the Caspian Sea.  There he completed the plans for his great society, the infamous Assassins, deriving their name from the Arabic hashishim, or "eaters of hashish," referring to the marijuana which he used to create the first mind-controlled terrorists.

INTERNATIONAL WAR OF TERROR
The Assassins waged an international war of terror against anyone who opposed them, but eventually turned on each other.  Finally in 1250 AD, the conquering Mongols swept over Alamut an annihilated them. Nevertheless, their followers survived, led by an imam called Aga Khan, who moved from Iran to India in 1840.

His subjects, who are estimated to number in the millions, are still found in Syria, Iran, and Central and South Asia, the largest group being in India and Pakistan, where they are known as Khojas.

Aga Khan II, came to be one of the founders of the Muslim League, which was sponsored by the British in 1858. The 48th Imam, Sir Sultan Mohammed Shah Aga Khan III, was very close to the British royal family during his 72-year reign, and held the post of chairman of the League of Nation's General Assembly for a year.

The 49th Imam, the currently reigning Prince Karim Aga Khan IV, was given the British title "His Highness" by Queen Elizabeth II in 1957.

Just as the 11th century Assassins were responsible for the development of Islamic terrorism, so in the 19th century, did the Ismailis continue to maintain mysterious alliances.  At the end of the nineteenth century, the Aga Khan was regularly visited in India by a notorious impostor by the name of Jamal ud Din al Afghani, founder of the Salafi movement, currently spearheaded by Saudi Arabia, and from which all modern Islamic terrorism derives.
Afghani was the purported head of the Hermetic Brotherhood of Luxor, which supposedly represented the survival of Ismaili Gnosticism in Egypt.  According to Robert Dreyfuss, in his book Hostage to Khomeni, Afghani became the chief agent of the Oxford Movement, a project to spread Scottish Rite Freemasonry to the Middle East. It was headed by Edward Bulwer-Lytton, who was the leading figure in the Occult Revival in the mid 19th Century.  He headed the SRIA, or English Rosicrucians, many of whom flocked to Egypt to study under Afghani.  His returning students founded a related Hermetic Brotherhood of Light, out of which emerged Aleister Crowley's satanic OTO.
Afghani is regarded as the founder of the Salafi "reform" movement, the most famous development of which is the Muslim Brotherhood.  The group was commissioned by Hitler, to act as an arm of German intelligence in Egypt.  With the demise of the Nazis following WWII, control of the organization passed to the CIA, who in turn recruited former Nazis to continue to handle the terrorist organization.
This was part of a wider strategy of employing Nazis and the promotion of terror, which also included the Gladio network, responsible for the "strategy of tension" which rocked Italy throughout the 70s with the terrorist actions of the Red Brigade.
AGA KHAN = CIA = MUSLIM BROTHERHOOD = MUSLIM TERRORISM


Essentially, the continuing relationship with the Muslim Brotherhood ostensibly represented the same age-old relationship that existed between the Templars and the Assassins, of which the Aga Khan is the current head.  Dean Henderson, author of Geopolitics: The Global Economy of Big Oil, Weapons and Drugs, summarizes the significance of this relationship:
"Part of this Faustian bargain may have involved the House of Saud chieftains providing information to US intelligence on how to create mind-controlled assassins. The Muslim Brotherhood claims to have first perfected this technique during the 11th century Crusades when it launched a brutal parallel secret society known as the Assassins, who employed mind-controlled "lone gunmen" to carry out political assassinations of Muslim Saracen nationalists. The Assassins worked in concert with Knights Templar Christian invaders in their attacks on progressive Arabs, but were repelled."
When the Americans wanted to lure the former Soviet Union into their own version of Vietnam, they did so by financing and supporting factions of the Muslim Brotherhood in Afghanistan, the most notorious proponent of which is Osama bin Laden.

Deeply involved in providing safe haven for the Afghan Mujahideen, and facilitating their dispersal throughout the world, was Ismaili Prince Sadruddin Aga Khan, uncle to the current ruling Prince Karim. (source: http://www.larouchepub.com/other/1995/2241_aga_khan.html)

David Livingstone is the author of Terrorism and the Illuminati (http://terrorism-illuminati.com), and more recently co-authored, Surrendering Islam: The Subversion of Islam Throughout History to the Present Day (http://surrenderingislam.com).

I read your article titled "Canada Gives $30 Million to Muslim Terrorists" and I must say that I have been very disappointed. After going through the article I could not help asking why linking Assassin story with the center of pluralism? Assassins lived hundreds of years ago and yes, they were Ismailis but what does that have to do with the center of pluralism? You have painted a WRONG image of Aga Khan and his followers, and you certainly do not understand the Muslim culture. Aga Khan is the ONLY Muslim leader who talks about "understanding different cultures and faiths" and the ONLY Muslim leader who ACTUALLY does humanity work but your article highlights a completely wrong image of this great humanistic leader.

In this article, you have only highlighted the Ismaili Assassin era which is a small era in the history of Ismailis. You should also have mentioned about the Fatimed Empire which was established by the ancestors of Aga Khan or you could have also mentioned the good work done by Ismaili Imams like building Universities l(Aga Khan University, Al-Azhar University - the oldest University in Muslim world, ), libraries, parks, hospitals, schools and many more.

Enjoyed the article (http://www.henrymakow.com/last_week_the_aga_khan.html). A friend at work and I were just discussing the event with Harper and Aga Khan yesterday and the relationship of the Ismailis to the Assassins.

[Livingstone's] research is pretty good and I do agree with the majority of your articles.

Should I ask our esteemed government why he is assisting a rich terrorist and why the opposition is doing nothing?

"The majority of Jews have no part in this,
except to be sacrificed again for a cause
they have no inkling of."

Really?? I respect every Jew who adamantly opposes
the Zionist idea. There are great people like
Israel Shamir, Israel Shahak, Mordechai Vanunu,
Gilad Atzmon, yourself and probably some more.
My impression is that you are a small minority among the millions who support Israel.
Gilad Atzmon said it very clearly: "the crimes are
committed by an army, which is acting in the name of the Jewish people, so every Jew shares the responsibility for the crimes committed in their name."
(this is not the precise wording, but i believe i properly
convey the spirit of his article.)

"And most Israelis and Jews cooperate by supporting Israeli outrages with feeble excuses, blithely indifferent to the possible consequences."

That's what i mean - now you say it yourself!