LIBOR -The Biggest Scam in History? 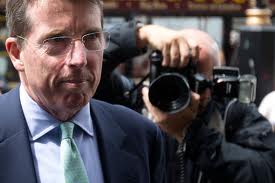 Bankers are insane vampires by definition. The banking cartel  rules the entire planet and is owned by a small group of families known as the Money Power or Illuminati.

"When bankers decide to manipulate this rate, it has profound consequences. Even with 1 basis point, (1/10 of one per cent) tens of billions of dollars are lost and gained, depending on whether you are the lender or borrower. They are planning class-action law suits which could topple the banks."

The LIBOR scandal, called LieMore by a witty commentator, involving the manipulation of LIBOR rates by Barclays Bank is only beginning to have an impact, but already some have dubbed it the biggest scandal in the history of finance. So is it?

LIBOR (London InterBank Offered Rate) is the index of interest rates banks charge each other. It used to be one of those highly relevant, but completely unknowns, until it became a concept of household fame in the fall of 2008.

At the height of the Credit Crunch, a peak in LIBOR showed banks were unwilling to lend to each other, forcing first the financial and then also the real economy to grind to a halt.

LIBOR is set every day by the world's biggest banks. They call in to report the rates at which they borrow from each other. The highest and lowest 25% of rates are discarded and the rest are used to calculate the average.

This number is then used as a benchmark for interest rates all over the world. For instance, almost 60 percent of prime adjustable rate mortgages, and nearly 100 percent of sub-prime ones, were indexed to LIBOR in 2008. One estimate has it that $350 trillion worth of loans and derivatives are indexed to LIBOR.

So when a couple of bankers decide to manipulate this rate, it has immediate and profound consequences worldwide. Even with 1 basis point, (one tenth of one percent) tens of billions of dollars are lost and gained, depending on whether you are the lender or borrower.

As a result, the banks involved face class action suits and clearly the sums involved will quickly overwhelm the banks.

Whether this will happen remains to be seen. BP destroyed the Gulf, but just coughed up 20 billion and never looked back. It is well known that banks are really, really very important to us. We couldn't exist without them, that's why we have to cough up trillions upon trillions to bail them out.

The story broke, when Barclays was fined $450 million by regulators in America and London. Their boss, Bob Diamond, initially shrugged it off and declared business as usual. The same idiot declared before the Treasury Select Committee in January last year: "There was a period of remorse and apology for banks and I think that period needs to be over."

In Holland, when a single mum on the dole rips off the system for a few thousand, she'll be tossed into jail for a few months and she'll be paying back everything. With interest.

Clearly, Bob Diamond, and a great number of other bankers too, should have been incarcerated a long time ago, but here too, he gets away with resigning.

Now the blame game is beginning. Yesterday Diamond declared that the Bank of England's second in command Paul Tucker made him do it. LIBOR was so high, the creditworthiness of the banks was being doubted. This was badly exacerbating the Credit Crunch and Tucker proposed a simple solution. He, in turn, was pressured by influential Whitehall types.

Meanwhile, JPMorgan, Citibank, Bank of America and probably most other banks involved in LIBOR are being investigated and undoubtedly are  involved. This goes to the heart of the banking cartel.

Barclays was named as being at the epicenter of the small group of firms that a fascinating study discovered to own most companies in the world, a few years back.

But in a classic case of double think, Diamond simultaneously declared it was 'just a group of 14 rogue traders'.

The whole system is involved. All the major banks, BoE and the British Government are already implicated. But undoubtedly the FED, the ECB and and a number of Governments were at least aware of what was going on.

The Banking System is One and involves all these players, including the press and the academic world. By shifting blame amongst each other they distract us from this simple truth. If they are all to blame, none are to blame.

So is this the biggest scandal ever?

Finance itself is the scandal. That $200k mortgage that we are paying $300k in interest over in thirty years was printed the minute we took out the loan.

The $450 billion the taxpayer is sweating to cough up each year to service the National Debt while the Government could easily print some interest free credit or even debt-free money is another example.

This is just the umpteenth banking scandal, but people simply cannot yet get their head around the fact that bankers are insane vampires per definition. That the banking system is one cartel ruling the entire planet and owned by a small group of centuries old families known as the Money Power or Illuminati.

That we should be getting our money out of the system now, lock up all these disturbed maniacs and print some interest free cash.

Perhaps this particular little scandal will help them understand. But I'm not holding my breath.

Diamond Claims Government, Bank of England in on the Scam

Video on this subject

Matt Taibbi - Why is Nobody freaking Out?

Understand that the Banking System is One
Take your Money out of the Bank NOW! (Video)

Comments for "LIBOR -The Biggest Scam in History?"

The “LIBOR scandal” is hardly a scandal, it is an outright piece of hard-core larceny and needs to be viewed as such.

The “press” (of course), selects the term “scandal” since it belies the gravity of the situation, making it seem like a naughty schoolboy lark. I encourage all others to use more appropriate language to bring home the significance of the heinous grand theft this instance represents.

It is agreed-- the event will be glossed over, there are far too many levels of interests involved in this larceny suggesting much whitewash, wallpaper, chafe and misdirection will be applied to the aesthetics of this unprecedented crime.

I take heart in that the “lightening is out of the bottle” though... and will not be put back in.

If there was ever a time to de-materialize the remnants of the global corruption scheme(s) – it is NOW, while the legion of disenfranchised is large, stoked with angst and somewhat aware of what and who put them into such a compromised reality. We can but hope.

It is my estimation that the global (regional/personal) economic situation is so far out of the realm of conventional solution it must surely fully collapse, if not soon then eventually.

No calculator in the world can perform a “settle” for the chasm of deficits piled unto the books.

Capitalism as a “system” has, in effect, been replaced by “Debtism.” Trading only in debts can hardly sustain any form of commerce or economy. If they (self-anointed elitist power-mongers), wish to avoid the worst of what amounts to looming world-wide socioeconomic collapse with companion anarchy, there are probably only two reasonable solutions available at the end of day.

A) Universal debt forgiveness conducted in an orderly fashion, complete with a full resetting... or
B) Naturally progressive Universal debt defaults--with all associated chaos and upheaval.

They will opt for B) naturally, since coming to a rational decision is far beyond their capability.

"And in another great lake, full of pitch and blood and mire bubbling up, there stood men and
women up to their knees: and these were the usurers and those who take interest on interest."

This quote is a description of hell that came from the Apocalypse of Peter; which was removed from use in the early Christian church because some people in that organization objected to it. Maybe they were the Pharisees. I wonder how many people would be usurers if they knew there was a special place in hell waiting for them. Now if the Jews are a major part of the banking system, how is it that they engage in usury which is completely against their own teachings? Their hypocrisy is overwhelming. And then they whine against people who object to their behavior as "racists." That kind of poppycock will only good so far.

And you'll never hear a "Christian" pastor teach against usury. Did any of us know that usury was against God's commandment? I did not. Were we taught that usury is considered stealing? Anthony's description of them as "insane vampires" seems to be a fair description. The banking system is founded upon evil; the evil is usury, and until the usury goes away, the whole system will be completely dysfunctional.

If usury is present in any financial system; then it is stupid, and you can't fix stupid.
http://verydumbgovernment.blogspot.com/2010/02/scourge-of-usury.html