Ten Lies about the Smolensk Crash 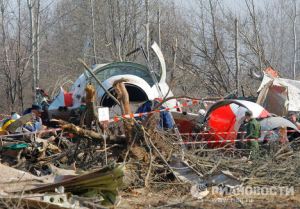 (Update! - the crucial video with translation)

The plane managed to make an emergency landing in the mud. The strength of the bomb explosion tore it into pieces and killed some passengers. The ones who survived were murdered with firearms.


Ye are of your father the devil, and the lusts of your father ye will do. He was a murderer from the beginning, and abode not in the truth, because there is no truth in him. When he speaketh a lie, he speaketh of his own: for he is a liar, and the father of it. John 8:44

by our Polish Correspondent
(henrymakow.com)

The horrifying story of Polish government murdered in a plane crash in Smolensk has been surrounded by lies from the second it happened, and probably even before.

In the case of Polish President's Plane crash in Smolensk, the perpetrators did not expect that the truth would come to light so quickly. They made too many mistakes. The short video, seen worldwide, is real. I do not care what the experts say. When I saw it for the first time, the deepest impression of incredible evil happening in this gloomy place was overwhelming. I do not need any experts to translate the Polish words spoken by the culprits.

I can understand my native language easily. There are Polish people shouting Polish words in authoritative and angry tone: "Calm down! Look into my eyes! Change of plans!"

And I can clearly hear gunshots, somebody is being shot there. Is that a Polish president, who survived the crash? Is that any other VIP who should be kept quiet for ever? We will never know the truth, because people whom we should trust do not want us to know it.

The 10 official lies according to Leszek Szymowski, the former journalist of the weekly â€žWprost" and TVP, the author of the controversial book titled: "Zamach w SmoleÅ„sku," (Assasination in SmoleÅ„sk)

2.The crew of the plane was inexperienced and made fundamental mistakes. Ignoring orders of the air controllers and making an attempt to land. It's a lie: Pilots were professionally trained and had great experience, and the controller gave them permission to land.

3. At 8:41 am, after collision with a birch tree, the plane turned to its back and hit the ground. Power of the load factor killed all passengers. Nobody survived. It's a lie: Tupolev cut trees down, but to some point damaged, managed to make emergency landing in the mud. O8: 39 the strength of the bomb explosion tore it into pieces and killed some passengers. The ones, who survived, were murdered with firearms.

4.The video shot on the spot with a mobile phone by WoÅ‚odia Safonienko does not make any difference, and the sounds registered there, come from the explosion of the ammunition  of  Government Protection Bureau officers. It's a lie: WoÅ‚odia Safonienko didn't shoot this film. The sounds of the shots came from firearms, and the film is the evidence that passengers who survived, were murdered.

6.From the very first second, the families of the victims were provided with legal and psychological aid and could participate in all activities. All bodies of the victims were identified and  transported to Poland.
It's a lie: families of victims have been humiliated from the beginning and had difficulties to get access to the investigative materials. The coffins brought to Poland were soldered and the families were not permitted to open them.

8.Russian Security Services didn't have the slightest interest in killing Lech KaczyÅ„ski, because in a few months he would stop being a president and would walk away into the political oblivion. It's a lie: Lech KaczyÅ„ski could win elections again. He acted against the politics of Russian  imperialism, he tried to get Georgia into NATO. He reinforced the independence of Poland, contributed to dissolution of WSI (Poland's former Military Intelligence Services) and opposed the disadvantageous regulations of the gas agreement with Russia.

9.After the death of President KaczyÅ„ski, relations with Russia have been normalized, and relationships between both states have became eventually correct . It's a lie. Polish foreign policy turned into prorussian direction, and the servility of the government and the president Komorowski towards Russia have reached inconceivable scale.

As I said before, the list of lies is endless, but there is no room here to write about them all. The best conclusion I read about what happened on 10.04.2010 was written by an anonymous blogger. Who does not believe it, must have eyes but cannot see and have ears but cannot hear.

"There is much more hidden behind this cruel, sinister and arrogant coup (d'Ã©tat), something much more than only a murder of the most important 96 people in the country, including the president.

For it was a violent assault on our country, on our economic freedom which we lost (they plundered and sold off as many as 8400 workplaces and factories). It was an assault on our independence (we were slapped in the face as it happened on the anniversary of Katyn slaughter).

The country is being denationalized;f our million people are forced to work in UK and other EU countries, having no other way to survive economically. Eleven million live in poverty and slavery.  It's about the IV partition of Poland, which is just taking place (for 22 years we have been watching the distinct collaboration of traitors with invaders).

Can't you see that?  This assault was the final nail in the coffin, and we all, as the whole nation are placed in it."

Comments for " Ten Lies about the Smolensk Crash"

I am not a Pole, but I live in Poland. (My wife is Polish, I am Hungarian)

The former article has the title: "Ten Lies about the Smolensk Crash"

But what about lies about the "Polish Patriots", the Kaczynski brothers?
This is the article by the chief Rabbi of Poland in The Yewish Week, New York, about the former President:

Polish president, victim of plane crash in Russia,
had close ties to the Jewish community.

"We lost a friend. As president of Poland, Lech Kaczynski was a very strong and outspoken supporter of Israel and of our local Jewish community. Just recently he strongly opposed the 2009 UN Goldstone Report (quite unusual for a European politician), which accused Israel of committing war crimes in Gaza."
----------------------------

The Kaczynskis have Jewish family background. I know, that You too, and that is not a problem in itself. But the K. brothers fantically supported Israel and the neocon agenda, including crazy acts in defense of the zionist puppet Georgian President, Saakashvili. It is well known, that the late President almost caused an aircrash in Georgia with several East-European Presidents and Prime ministers on board of the Polish Air Force One, triing to force the Polish pilot to land in Tbilisi's airport under Russian fire.
The Kaczynski-camp histerically accuses Russians, Germans and everybody in fantastic conspiracy theories, stating, that their leader, JarosÅ‚aw Kaczynski is a "conservative patriot".

But he is Zionists and a crazy man, the true conservatives are aware of that.

Hi Henry, I think there is much more that needs to be mentioned about that incident.

It seems strange to me that the most seen video on YouTube by Adrie Mendiej, of that crash scene was not mentioned.
http://www.youtube.com/watch?v=MsvgFj78kUM&feature=related

It was reported also that shortly after he put his video on the internet, he was stabbed 3 times, and while in the hospital the next day someone went and stabbed him 3 more times and he died. 33! A message and signal to those who it was intended for.

Well worth seeing is this video by Jane Burgermiester:
http://www.youtube.com/watch?v=JlNBcILZ2Zc&feature=related

She gives an excellent report of what may have happened. She was also attacked by the authorities in her native Austria after she made this report. Perhaps because she gives some information indicating the real reason that airplane crash was made to happen, and by whom.

What was not mentioned in the article also, but was clearly seen and heard by the first on the scene video by Mendiej, is that there seems to have been perhaps only four passengers on that flight when it crashed, and those 4 crew survivors were then shot by some Russian "government" individuals, all happening while the video was being made

I just felt compelled to write and congratulate you on your superb website, one that I visit daily and have done for the last ten months.

We are reahing the end of the current system of things and God is working fast to open many people's eyes to the satanic world we live in. Your work really is spot on and I thank you for the education and inspiration you give.

Last November (2010) Vladimir Putin "vowed" to head an investigation to determine the cause of the crash - personally. In January the Russian report was sent to Polish government without fanfare. Putin's investigation conclusion? "Pilot error".
To add insult to injury the Russian's deduced that pilots were 'under pressure' because the commander of Polandâ€™s air force - General Andrzej Blasik -
was in the cockpit. The Russian report implied that General Blasik was drunk.

July 29 2011, upon conclusion of their own investigators the Polish government repudiated the Russian conclusions. It's well known that the previous Polish government weren't intimidated by Russian pressures anymore and pursued policies intolerable to Poland's former 'masters'.

Western hemisphere readers will be interested to hear Polish correspondents tell us what the Russian government hoped to gain from this atrocity. Aside from looking like 'regime change' Stalin style - it looks like an international public relations fiasco.