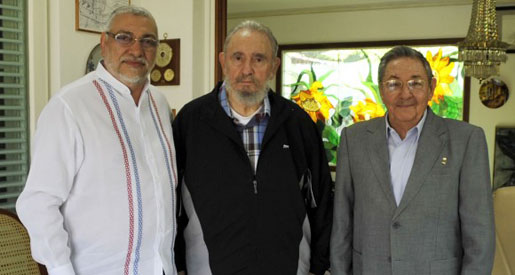 Update (June 30) :
Chavez sent a delegation of ministers from Venezuela, Ecuador and Brazil to tell the Senate and military of Paraguay to make a coup and reinstate Lugo in the presidency.
Fortunately, the military sided with the Congress and Constitution and send them away.
Update (June 29) : The Marxist presidents of Brazil, Argentina and Uruguay expelled Paraguay from Mercosur trading bloc and admitted Venezuela. This goes against every rule in Mercosur's manuals. Paraguay never wanted Chavez in the bloc, and now the Marxists had their day. This is a natural continuation of the Forum of Sao Paulo plan for a Marxist bolivarian revolution in the continent.


This week we have witnessed the impeachment of the President of Paraguay, Fernando Lugo. (Seen above with the Castro mob brothers.)

Acting lawfully according the Constitution, the Congress voted him out by an impressive majority of 76 votes to just one. The Senate confirmed the act with a 39/4 count.

Among many accusations, like nepotism and corruption, Lugo was ousted mainly for promoting rural Marxist terrorist groups, which were creating havoc in the country. By abiding to the Constitution, the Paraguayan Congress effectively prevented a bloody Marxist takeover of the country.

Lugo is a long term Communist, a former bishop groomed in the Marxist Liberation Theology, who had his ecclesiastical powers taken away by the Vatican. He had at least three children from three different women while he was a priest, and only accepted DNA testing for one (positive result.)

He is a populist who was promoting and organizing the rural communist guerrillas in his country, like the Popular Paraguayan Army (EPP), to promote a Marxist revolution. The event that resulted in his impeachment was when terrorists invaded a farm and killed six policemen in cold blood.

We have the same kind of terrorist groups here in Brazil. Of more than one hundred groups, which receive hundreds of millions of dollars in government grants, the most famous is called MST (Landless Peasants Movement).

Another group, the League of Poor Peasants, have links with the Peruvian Sendero Luminosos Communist Party, which was responsible for more than 31,000 deaths in Peru during the 1980s, and is a fan of the Khmer Rouge, which killed more than 3,3 million people in Cambodia.

All these groups, along with the leftist political parties of Latin America and narco-terrorists like the Colombian FARCs, are members of the Foro de Sao Paulo, a Marxist association with the objective of promoting a Marxist takeover of the continent. 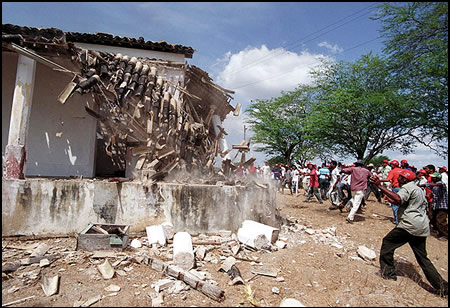 These so-called peasants are people who don't know how to plant a garden if their lives depended on it They invade productive farms, kill workers, kill cattle, burn buildings. They do it because they know the government will never do anything. They are extremely organized and groups in other Marxist countries help each other.

These rural pawns of communists often sell the land they get. When they keep the land, they are usually unsuccessful.  They have schools that teach communist revolution and guerrilla tactics. Often they are recruited from people in the cities, or any desperados they can find, with no rural background, just as cannon fodder.

Lured by the promise of free land, they have to pay the leaders to camp on the occupied farms and have to sell to them any produce they can grow.

The Paraguayan Congress in fact blocked legally and constitutionally  a Marxist revolution in the country and in doing that, prevented much bloodshed. Now it is time to face the strong backlash from leftist media and the surrounding Marxist countries.

The hatred of efficient and productive farms has always been a sign of communist regimes. Stalin destroyed Ukraine's agriculture in the 1930's and consequently killed 7 million people. Mao killed from 20 to 43 million people during the 1958 to 1961 period, mainly because of forced collectivization of small farms. Food is the ultimate weapon.

Now we see again at the Rio+20 UN meeting neo-Malthusians promoting their apocalyptic views of population explosion and the need of forced sterilization to control the number of people on Earth. Obviously, productive farming and an increase in productivity are enemies of this view. The Illuminati have already blundered with the failure of the anthropogenic global warming movement, and now they want to make sure that people are controlled some other way, even if they have to starve them to death.

That's why they invest in two fronts: in more developed countries, front organizations like WWF and Greenpeace to push for extreme ecological laws that effectively destroy the agriculture, and rural marxist movements to destroy the agro-business in Third World countries. It is all connected on a higher level. 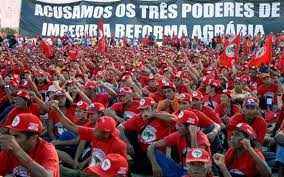 Marxism and the new world order are difficult to fight because they have brainwashed people to think that they own exclusive rights to kindness and good motives. Anyone who questions their motives, even when acting under the law, is called a reactionary, a fascist and a criminal.

The Paraguayan vice-president assumed the function in a climate of perfect peace. No massive protests happened, and there is widespread relief among the rural population that had been terrorized for so long.

However, the communist machine in the surrounding countries is already in full throttle. Cuba, Nicaragua, Venezuela (Marxist dictatorships in fact), alongside with Brazil, Bolivia and Argentina, have challenged the new government, trying to create a crisis where there is none and demanding that Lugo return to the presidency. The leftist media is on fire, calling the impeachment a coup.

What is most appalling is that Dilma Roussef, Brazil's president, is backing Lugo with all her energy, even though some of the most affected farmers who are suffering at the hands of the terrorists are Brazilians who bought farms in Paraguay decades ago and drastically improved the productivity of the agriculture there.

For Marxists, there is no such a thing as country loyalty.

Yes, I do believe that Communists and other minions of the NWO are that sadistic and vicious. Your own reporting confirms this as fact.

"Marxism and the new world order are difficult to fight because they have brainwashed people to think that they own exclusive rights to kindness and good motives."

Marcos makes a good point. A Marxist seems to know a lot about nothing. They are not kind nor do they have good motives, they are just plain evil. And they are actually the dumbest people on the planet; save maybe for freemasons. They speak with an air of authority which they do not have, they promote their "science" which is not, and anything that comes out of their mouths is utter bullshit. This is going to come to a critical mass here at some point because the suckers (communists/socialists) are starting to outnumber the producers. What's almost comical is that the suckers have very little skills with which to make money. When they speak, they speak out of their collective asses. Last I heard, it still takes money to go buy something. The producers will still retain the ability to produce. They should stand back and watch the suckers wallow in their own misery.
http://verydumbgovernment.blogspot.com/2012/05/how-to-punk-socialist.html