(Excerpt from "The Rockefeller Bloodline" )

When high level Satanists do not have MPD [multiple personality disorder]  they very often emotionally break under the stress of the horrible blood rituals that are required. Recently, a non-MPD Satanist in Chicago emotionally broke and gave his life to Christ. (I have videos available of an interview of this man exposing Satanism.) One of the important lineages has remained secret until 3 investigators named Lincoln, Leigh, and Bageant were spoon-fed leads and secrets. They put this into a book called "Holy Blood, Holy Grail." I recommend the book and the two books which are its sequels, because they show how just one part of the 13 lineages has kept itself secret and has taken immense power of all forms to themselves.

In Southern Belgium there is a castle. (If any one is traveling there and wants to find the castle, I will show them on the map, and describe it.) This is the Mothers of Darkness castle. In that castle, is a cathedral and in that cathedral's basement a little baby Is sacrificed daily and Is coming to power. The pages are written almost round the clock. (This castle is also described in my Be Wise as Serpents book.)

The history in that handwritten book would reveal the real facts behind the propaganda that the world's major news medias give the gullible public. The history as that book reveals it would tell people about how Abraham Lincoln was a descendant of the Rothschild's. Abraham Uncoin was the secret head of the Rosicrucian's, a member of their 3 headed top council. (I have seen the paper trail proof to these things about Lincoln to my satisfaction that these things about Uncoin are true.)

Adolph Hitler was also a secret member of the Rothschild lineage. Hitler carried out blood sacrifices to open his mind up to high level demonic spiritual control. Rockefeller sold Hitler oil during W.W. II via Spain to keep W.W. II going longer. The history in that book mentions people that the "history books" given the public don't-- like Michael Augustus Martinelli Von Braun Rheinhold, the most powerful Satanist in the world a few years ago. Michael Augustus Martinelli Von Braun Rheinhold had 66 Satanic Brides. And that Satanic book in the Mothers of Darkness castle also mentions the Rockefeller bloodline.

Only insiders are supposed to know the real history of what has taken place in human history. The real decisions and the real movers and shakers have been hidden from the public's eyes. What the public is given is a stage show where illuminati puppets parade around and make big speeches according to their script. 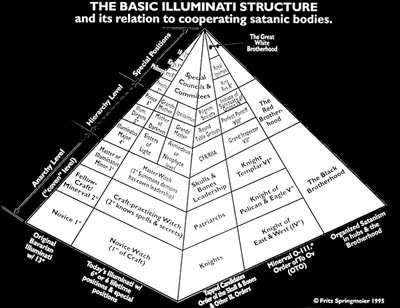 This is independent of the Illuminati hierarchy which was diagrammed in the Jan 1993 newsletter. (my Newsletter from a Christian Ministry.) In the January, 1993 issue the Covens, Sisters of Light, Mothers of Darkness, and the Grande Mothers were diagrammed. The illuminati pulls its various bloodlines together under several councils. The Grande Druid Council or your Council of 13 is your principle council for the Brotherhood of Death.

Above the Council of 13 is a higher Council of 9, and an inner group of 3 is believed to head that Council of Nine. How do we know about these things? The power of God has reached into the very heart of Satan's empire and pulled out some of the most powerful Satanists and drawn them to Christ. There are several Satanists that were at the top which have managed to find Christ.

In addition, some of the next echelon of the hierarchy, such as some of the Mothers of Darkness are also finding Christ. if someone wants to understand how and why decisions are made in world affairs and by who-- then you need to study the Illuminati. The real answers do not rest with the proceedings of the Congress of the United States or with the publicly known leaders of the Communist countries. An example of what I am talking, there is a book entitled "Who Financed Hitler" by James Pool and Suzanne Pool. I am always glad to see that some people are wiling to look behind the scenes. Believe me, there were people that Hitler listened to. They were the people he went to ritual with, and who put him into power.

A CONTINUATION OF THE SERIES OF ARTICLES ON The TOP 13 ILLUMINATI BLOODLINES. The ROCKEFELLER FAMILY

The first notorious Rockefeller that researchers who are not working for the Rockefellers refer to is William Avery Rockefeller (1810 -1906?). William Avery Rockefeller was totally corrupt and lacked any type of morals. He was involved in the occult and practiced magic. He married a number of women around the country in bigamous relationships. He also had a number of mistresses, and a large number of sexual partners. He was charged with raping a women and escaped the state of New York to prevent being sent to Jail for it. He stole, lied, and abused his way through life. He wore the best of clothes, and he never lacked for money, including gold coins. Besides loving women, he loved gambling. And where did his money to gamble with come from? He made much of his money dishonestly. His life Is a carbon copy of other men who are known by this author to have been in the Illuminati. (The reader also needs to bear in mind that the Illuminati carries out a large number of secret occult marriages, which only insiders learn about.) One of his wives was Eliza Davidson. She was an extremely cruel woman. Historians who have been bought off by the elite like to picture Eliza Davidson as a very pious woman. Although she had a religious front, there are a number of things in her life that show that she was not the paragon of virtue that the paid-for historians have made her out to be. When she married William Avery Rockefeller she moved in with him and his mistress.

William Avery Rockefeller had many bastard children, and it can be imagined many children born for ritual or for the cult. His wife Eliza had six children for him and of those John Davidson Rockefeller is the infamous one who brought the family into limelight. John D. Rockefeller in his lifetime became one of the most powerful men in the world. One of the most best kept secrets were his secret dealings with the other Illuminati families. The Payseurs and other Illuminati families are all intimately involved in the rise to power of the Rockefellers. The other factors involved in John D. Rockefeller's rise to power Is his utter ruthlessness. He was willing to do anything for power. John o. Rockefeller established the family in their principal estate at Pocantico Hills in New York. I have lost the exact figure, but over 100 Rockefeller families live at the private land of Pocantico Hills.

A BRIEF SURVEY OF THE ROCKEFELLER'S INFLUENCE

Just three of countless Rockefeller companies are Texas Instruments and General Electric, and Eastman Kodak. The Rockefellers also control Boeing. This author (Fritz Sprlngmeier) has repeatedly been given information from numerous sources about the occult activities that are being perpetrated at the Boeing plants in the Seattle area. Monarch programming has even taken place at a Boeing Plant. All these things fit together when one gets the bigger picture and the inside scoop. The Rockefellers also control Delta. Has anyone realized that the Delta symbol is a very widely used satanic symbol? Is It any wonder so many Illuminati and CIA, and world financiers, and people like Chuck Colson (see the exposes on Chuck Colson in 93's newsletters) use Delta to fly on.

The Rockefellers have played a role in Lucis Trust and the United Nations. Interestingly, you will notice that Prince Charles is the spokesperson for Lucis Trust and also works with the United Nations in various ways. Prince Charles Is from another satanic bloodline. Readers need to study my Be Wise As Serpents book to see how Lucis Trust fits into things. The Rockefellers were involved in the creation of the FBI, so that the FBI has always been an arm of power for the Illuminati. That is why there are official FBI programs in action today to kidnap children and provide them for sacrifice.

Yes, American people, the wolf was set in charge of guarding the chicken coop. The organization that is working as part of the FBI is the Finders. (The stink was so bad that US. News & World Report did a story to soften the impact of the scandal. See the article on a following page. Ex-Satanists who worked with the FBI to receive the children the FBI kidnapped and sold to them for sacrifice have been trying to get the word out publicly about the FBI's corruption. When the Illuminati was beginning to get exposed in the Franklin Saving & Loan case in Lincoln, NE the FBI was part of the dirty actors and was part of the cover up.

Rather, than risk  election, a brilliant coup d'etat which Is exposed in Be Wise As Serpents. was carried out to put Nelson A. Rockefeller into the Vice-Presidency.

The investigator of the Rockefellers will find that they have secretly had their hand in the politics of the United States during the 20th century. The decisions and directions this nation has taken, are the result of countless orders which the Rockefellers have given to their underlings.