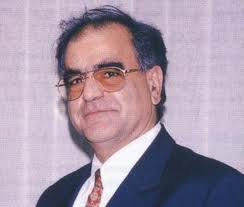 Left, Orientalist, Historian, Political Scientist, Dr. Megalommatis, 54, Greek citizen of Turkish origin, living in Cairo, is the author of 12 books, dozens of scholarly articles, hundreds of encyclopedia entries, and thousands of articles. He speaks, reads and writes more than 15, modern and ancient, languages.

If the Freemasonic regime, which rules tyrannically the West and (through the West) almost the entire world and controls every word written in the aforementioned newspapers, supports this development, we have to immediately understand that the street manifestations in Tunis were simply orchestrated to effectively suit their propaganda and agenda.

Still there are many, either in the Arabic speaking world or anywhere else, who believe that this development represents a genuine, non-orchestrated, popular demonstration. The people who believe so are either extremely gullible or dramatically hopeless.

On the other hand, there have been few courageous supporters who  rejected the interpretation of the world's influential mass media and the Freemasonic regimes - according to which the Tunis events were a popular revolt. The most vocal case was that of Muammar al Qadhafi (Gaddafi) who despised the Tunisian people in general and the demonstrators in particular.

WHAT HAPPENED IN TUNISIA

In fact, it is not the Tunisian people (or just the demonstrators) who forced the former president to escape; it's the generals who forced him - using as pretext the heavy casualties occurred during the tumultuous manifestations. In a meeting with powerful generals, Zine al Abedine Ben Ali lost effectively every element of power. He left immediately after.

However, the details of the developments reveal a mere theatrical act; some form of clandestine organization, composed mainly out of left wing Tunisian students and workers who had spent some years in France, gathered a small initial support and soon after undertook the early manifestations.

At the same time, some people with key positions in the police and the administration demanded that the early manifestations be met with a strong response from the police and the army. These people had also spent years in France whereby they received colonial education and Freemasonic initiation.

With these two different groups under control and stage-managed superbly, the second act (deterioration in the streets and national worries in the controlled mass media) and the third act (intervention of the well-decided Tunisian generals who had been initiated in the Apostate Freemasonic Lodge in France) of the play had to be performed. This was enough for Zine al Abedine Ben Ali and his wife to take 1.5 ton of gold and leave the country.

This chain of developments could have taken place any time in the past, but it seems that the whole story bears witness to a great deal of political barter trade between the US (a former strong supporter of Zine al Abedine Ben Ali) and France (a cruel enemy of Zine al Abedine Ben Ali who - quite tellingly - was not accepted in France!); in exchange of true French support and commitment in Afghanistan, the US regime sold the Tunisian idiot who had imagined that he reserved the US support forever.

Nobody told Zine al Abedine Ben Ali that you can never trust a single word that goes out of the filthy and desecrated mouth of a Freemasonic Satanist. This was his mistake. Quite unfortunately, many others make the same mistake; it's high time that they wakeup before they fly to Saudi Arabia.....

But then, how could one explain Muammar Gaddafi's outburst? If we assume that, after many long years of clashes with many Western countries, the Libyan dictator found a way of befriending the West and cooperating with several European governments (thanks to his son Seifulislam's debauchery in Paris), why did he then attack the developments so bitterly?

As an ally of the European capitals, he should also 'sell out' his former Tunisian counterpart and look forward to Libya's democratization; but he did not do so. Why?

The reason is simple; members of Freemasonic regimes need friends and co-operators, allies and interlocutors everywhere, and so they do when it comes to Libya. But Freemasons need interlocutors and allies in order to confuse and deceive them! Not to tell them the truth....

The truth is already not said from one Freemason to the other; how could it be possibly said to an outsider and an outcast?

The bitter reality is rather simple; by befriending with Western Freemasonic regimes, Gaddafi exposed himself to their sophisticated falsehood, deceptive schemes, and unadulterated lies that serve the villainous Freemasonic gangsters who rule England, France and America to easily manipulate the developments they want to trigger and to stage-manage the theatre of destruction throughout the world. In private, they say to Gaddafi that they are against the Tunis events and that they highly appreciated Zine al Abedine Ben Ali.....

Some issues are personal; and the worst personal damage that can happen to a Freemason is to be robbed by a non Freemason; these evil persons take it very badly, because money is their sole 'god' and because they are idiotic enough to believe in their intellect's superiority. In such cases, revenge is imperatively taken, and the cost of a human life can suddenly become next to nothing.

Why among all the relatives of Zine al Abedine Ben Ali, his nephew, Imed Trabelsi, was butchered in a merciless way? Why bother to kill - with such passion, with such determination, and with such hatred - someone who was not in the front line of the Tunisian political life, being a mere businessman?

It looks awkward only if you never heard of Zionists and Freemasons; actually, Imed Trabelsi had stolen the lavish yacht of a French Jew and Freemason, Bruno Roger, the chairman of the French firm Lazard; this guy is an acknowledged arms dealer of the worst sort. And subsequently, for the Satanists who rule France, the account had to be regulated - even as a part of a ''popular revolt''.

(Thanks to Ionut for sending this.)

The writer of this article about Freemasonry and Tunesia forgot to include Canada among the nations that Freemasonry controls.

Incidentally, all eight judges refused to admit or deny of they were Freemasons. Justice Kelleher was the most ridiculous. He called for a recess to consider the question - Kelleher obviously didn't know what to do when asked if he was a Freemason so he called a recess to get directions and came back into court and said he would not answer the question which basically means he is a Freemason.

We are currently investigating the sudden death of former Chief Justice Donald Brenner. The death looks suspiciously like murder and Brenner was a next door neighbour to present Chief Justice Finch who was one of the eight judges who have refused to disclose if he was a Freemason.

Brenner and Finch had been close friends and owned homes on Thormanby Island near Vancouver where Brenner was found dead on March 12, 2011 from a suspicious heart attack. Our present theory is that Finch is a top Freemason, in Canada, and that Brenner was murdered by Finch in order to silence him. Brenner was getting loose lips after he suddenly resigned and had been working with the Canadian Department of National Defence which knows everything about the Freemasons due to its listening programs that have been operational since the late 1940's.

The problem for Freemasonry in Canada are the French Canadians who control much of the apparatus of government including the Department of National Defense and who have no love for the Queen of England and English style Freemasonry.

The article by Megalomattis was interesting, if a bit superficial, as far as the theatrical aspects of the Libyan conflict go, but what about the motivation behind the war? What is it really about? Here is a very cogent argument, with much evidence, that suggests it is more about central banking than anything else, and quite profoundly so