Henry Ford: Can a Freemason be an "Anti Semite"? 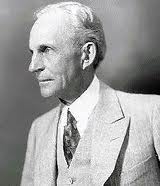 The contradiction is explained if we see Ford in the context of Freemasonry's build-up of Hitler. Freemasonry & Ford also built up Illuminati Jewish Russia for the dialectical clash called World War II.

This is from "Masonic Movers & Shakers of World II"

Not only did Ford have a significant role in the events of WW2, he also served as business representative of the American League to aid and co-operate with Russia in 1918 alongside many other Bolshevik Jewish financiers and Freemasons. At the same time Ford financed Adolf Hitler in the early 1920's, the formative stage of the Nazi Movement.

In 1928, Ford merged his German assets with the I.G. Farben chemical cartel. Carl Bosch of I.G. Farben became head of Ford A.G. Motor in Germany while Edsel Ford joined the board of American I.G. Farben. Illuminati Jews, the Warburgs were on the boards of I.G. Fareben i the US and Germany. The Oppenheimer bankers were given "honorary Aryan status" by the Nazis.

Hitler had a picture of Ford in his office and decorated the auto mogul in 1938, in honor of Ford's 75th birthday.

In 1932, Ford built a huge automotive plant in Gorki Russia
which produced over 80,000 vehicles per year.

"It is important to note as we develop our story that General Motors, Ford, General Electric, DuPont and the handful of U.S. companies intimately involved with the development of Nazi Germany were -- except for the Ford Motor Company -- controlled by the Wall Street elite -- the J.P. Morgan firm, the Rockefeller Chase Bank and to a lesser extent the Warburg Manhattan bank." (Wall Street and the Rise of Hitler, p.31.)

The book "10,000 Famous Freemasons" reveals that all of these firms were dominated by the Masons.

Henry Ford was a Masonic enterprise from the very beginning. Henry Ford was organizer and owner of Ford Motor Company. He was raised  in the Palestine Lodge No 357 Detroit Michigan 1894 and remained a staunch member of this Lodge for 53 years. 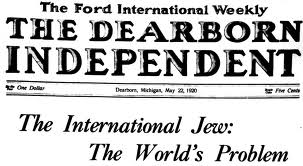 "Masonry is the best balancewheel the United States has, for Masons know what to teach their children." Ford funded Communism and Nazi-ism, he also sponsored the famous Anti-Semitic 'The International Jew' and was honorary member Zion Lodge No1.

Also with Ford and General Motors was Ernest R.Breech who became Exec vice president and director of Ford from 1946-1955 and Chairman of the board from that date. Breech was also vice president of General Motors 1933-1942. Raised in Austin Lodge No 850 Chicago in 1924. Soverign Grand Inspector General and 33rd degree AASR (NJ).

Charles S.Mott was Vice President of General Motors 1916-37 and Director since 1913. A member of Central City Scottish Rite Bodies at Syracuse NY and received 33rd degree in 1941.

Without Ford and GM Germany's war production (especially in the field of tanks) would have been nothing. Sutton writes:

"In brief, there is documentary evidence that Ford Motor Company worked on both sides of World War II. If the Nazi industrialists brought to trial at Nuremburg were guilty of crimes against mankind, then so must be their fellow collaborators in the Ford family, Henry and Edsel Ford. However, the Ford story was concealed by Washington -- apparently like almost everything else that could touch upon the name and sustenance of the Wall Street financial elite". (p.89)

IBM was another Masonic Enterprise. The notorious Thomas J.Watson was President and Director of IBM 1914-49, Chairman of the Board and Chief Executive officer 1949-56 and Chairman of the board after 1956. Watson was raised in 1901 in Valley Lodge No 109, Rochester, New York and received the Grand Lodge 50 year service medal in 1952, and in 1954 was presented the Grand Lodge medal for distinguished achievement.

In "IBM and the Holocaust: The Strategic Alliance Between IBM and the Nazis," Edwin Black writes that information technology--in the form of IBM's Hollerith punch-card machines--provided the Nazis with a unique and critical tool in their task of cataloging and dispatching their millions of victims.

As the book's title suggests, Black maintains that IBM had a strategic alliance with the Third Reich in which it licensed and custom-designed its products for use in the machinery of the Holocaust.

IBM has responded to questions about its relationship with the Nazis largely by characterizing the information as old news.

Dow Chemical were part of the IG Farben umbrella corporation and were suppliers of large stocks of Magnesium for incendary bombs and other chemicals for the production of explosives.

Williard H. Dow
President of Dow Chemical Co from 1930, chairman of the board 1941-47. Was also a director of several other Dow corporations. Mason 32nd degree AASR and Shriner.

Walter RG Baker, a veteran of General Electric since 1916, rose to directorship of many banks and corporations including General Electric (international); GE Supply Corp and GE Credit Corp. Mason.

According to Hitler's financial genie, Hjalmar Horace Greeley Schacht, and Nazi industrialist Fritz Thyssen, it was the 1928 Young Plan (the successor to the Dawes Plan), formulated by Morgan agent Owen D. Young, that brought Hitler to power in 1933.

Fritz Thyssen claims that, "I turned to the National Socialist Party only after I became convinced that the fight against the Young Plan was unavoidable if complete collapse of Germany was to be prevented."

The Young Plan was a device to occupy Germany with American capital and pledge German real assets for a gigantic mortgage held in the United States. The ulterior motive was to increase unemployment and fuel the rise of Hitler to power.

This interplay of ideas and cooperation between Hjalmar Sehacht in Germany and, through Owen Young, the J.P. Morgan interests in New York, was only one facet of a vast and ambitious system of cooperation and international alliance for world control. As described by Carroll Quigley, this system was

"... nothing less than to create a world system of financial control, in private hands, able to dominate the political system of each country and the economy of the world as a whole."

The Nuremburg Trials were a Freemasons free-for-all, a whitewash designed to cover their own tracks, and distract attention from more horrific events in Masonic Soviet Russia.

Movers and Shakers of Nuremberg included: 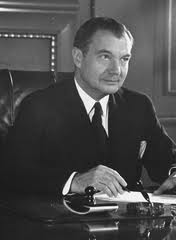 US Attorney General, US Supreme Court Justice and American prosecutor at Nuremburg war crimes trials tribunal. In 1945 he was appointed by President Truman to represent the US in negotiating with Russia, England and France on agreement for international trials of European Axis war criminals, and was also named chief of council for US, to conduct prosecution of Goering, Ribbentrop and others. Member of Mt Moriah Lodge No 145, Jamestown, New York. Also 32nd degree AASR.

Justice Supreme Court of North Dakota 1935-55. Judge at the major war crimes tribunal at Nuremburg in 1947-48. Member of Bismark Lodge No 5 and 32nd degree AASR. Also Shriner and National Sojourner.

The evidence suggests that you cannot reach the top in business or government if you are not a Freemason. This form of secret discrimination is a fundamental betrayal of the social contract. Why would anyone feel they owe anything to society?

The record also suggests that Freemasonry foments war to concentrate wealth and power in its hands and to degrade and demoralize humanity in advance of the New World Order.

Comments for "Henry Ford: Can a Freemason be an "Anti Semite"?"

s an example of how a mason can claim to 'hate the jews' whilst being at one with them, The Pink Swastika demonstrates that by claiming to have outlawed homosexuality and imprisoning at most, 10,000 of an estimated 1-2 Million rampant sodomite pederasts, the heat was take off the fact that he and all his troops were in fact butch buggers; the fems had a harder time of it.

But by pointing the finger away by force of law, they scapegoated the fems or recalcitrant homosexuals by branding them homosexual and rounding them up as a token measure.

Same with the Jews; by taking an anti Jewish stand, attention was deflected away from the fact that Hitler and his top handlers and aides were Jews and of course, homosexual. Only they didn't consider themselves homosexual but 'real men'.

Homo sexuals were effeminate like J Edgar Hoover. Same with Stalin, Hitler and Roosevelt. The British Foreign Orafice boys creamed over Stalin ... his brutish psychopathy appealed so much that they delivered the Cosacks to him on a plate whilst handing him half of Europe.

Henry, Boy, those Henry Ford Masons must have had a big network of really evil people, all connected to play their part in pulling off their global war. I guess that 's what they mean when they use the word "management". A flawless machine of syncopated evil.

Albert Pike did say "Soon the world will come to us for its Soverigns and its Pontiffs". That may explain something but then again, i have heard of people who claim to be ex-masons who have left the lodge, even though they had attained the highest rank . Could this explain it??!!

Henry you forgot to add to your comment: " The evidence suggests that you cannot reach the top in business or government if you are not a Freemason. That today you have to be as well a homosexual pedophile."

Forgetting the funds and intrigue...according to the book, "Trading with the Enemy" by Charles Higham...Hitler's Luftwaffe (air force) couldn't get off the runway without an aviation fuel additive that could only be supplied by Rockefeller's Standard Oil. Hitler's tanks couldn't roll one millimeter without special ball bearings that were supplied by only two factories, one in Sweden and the other in Philadelphia. If not for the cooperation between Hitler's War machine and these three companies...the Illuminati could not have had their precious WWII.