A disturbing Chinese promotional ad for the June EU soccer tournament shows London being destroyed.
The tournament took place in Warsaw and the Ukraine.

(Editor's Note: We present this information for discussion purposes. We do not endorse it nor other work by this author. )

A Chinese advertisement was recently released for the Euro 2012 soccer tournament which created some controversy.

Even though the ad is for a soccer tournament, it strangely depicts war-like scenes with tanks and anti-aircraft batteries being shot at planes flying in the sky and even a bomb being dropped on the stadium itself. (Commercial is available here.)

The song being sung is the Chinese version of a Russian-themed masterpiece talking about the Communist-Russian Jewish song "Farewell Slavianka"...It's all about rise, betrayal, and war.

The advertisement also suggests that the terrorist attack will be broadcast live on Television.

Right after the explosion, there is a quick flash with the words "NOW-TV" which implies that it will happen very soon as the commercial was aired recently during the Euro 2012 soccer tournament.

Were the Chinese secret services leaked intelligence on the Olympics attacks? Did they leak this warning out during the Euro 2012 soccer tournament?
â€¨
One can't help but notice that every-time there is a ball kicked, there is a trail of fire blazing through it. It seems like the Israeli team is persevering and trying really hard to score. Finally, there is a free-kick shot at the end of the game. The ball blazes through the goal-keeper and swooshes into the net. The tie-breaker has just been scored and there is no need for overtime periods or penalty shots to secure victory.

The numbers 1,3,6,5,2,4 represent the London Underground - Travel Card Zones 1-6. Perhaps it also reflects the order in which the bombs will strike the London underground. Another interesting thing to note is that when the string of consecutive natural numbers from 1to 6 are added together, they automatically equal 21 or a "Blackjack"!

The Big Ben clock tower will be one of the main targets. In the animated commercial, we see that planes will fly over it dropping bombs on the stadium simultaneously whilst Big Ben is blown up by a bomb placed inside it. It is an important target not so much as in the expected casualties that will come from bombing that location, but more so in the symbolic value attached to it in the minds of the indigenous British public.

The underground subway, land buses and bus terminals, and the train station at Stratford in particular are potential targets.

Up to six bombs, possibly all of them nuclear will be placed underneath the different Travel Card zones. A seventh nuclear bomb or mega bomb will be detonated right underneath the stadium of the Olympic site.

The Rockefeller Foundation recently released a document titled "Scenarios for the Future of Technology and International Development". The document presented the following scenario with regards to the elite's plans for the 2012 London Olympics. (It is reminiscent of PNAC's call for a "new Pearl Harbour" before 9-11.)

"One important -- and novel -- component of our strategy tool kit is scenario planning, a process of creating narratives about the future based on factors likely to affect a particular set of challenges and opportunities." (pg. 4)

"The years 2010 to 2020 were dubbed the "doom decade" for good reason: the 2012 Olympic bombing, which killed 13,000, was followed closely by an earthquake in Indonesia killing 40,000, a tsunami that almost wiped out Nicaragua, and the onset of the West China Famine, caused by a once-in-a-millennium drought linked to climate change." (pg. 34) 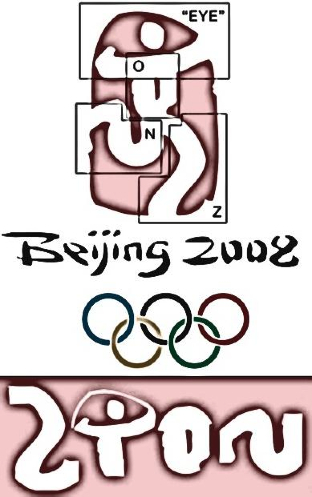 The logo for the 2008 Beijing Olympics also had pieces, when broken up into different interlocking and congruent regions, seemed to be a pictorial anagram for the word "Zion".

Back then, the sign was subtle and there was very little evidence to suggest a major terrorist attack would strike Beijing.

Now the logos are quite different and the word "ZION" becomes explicit.

The "ZION" logo was designed by none other than Wolff Olins - a high-ranking Jewish Freemason.

The Zion 2012 logo represents the "New Jerusalem" or "new Zion" that is going to be constructed after the destruction of London. What possible reason is there to have the logo spell out "ZION" unless it stands for the New World Order, i.e. one world government tyranny?

Modern Warfare 3, a video game, is set in London. Check it out!

I found some Illuminati game cards, that may be relevant to the London Olympics.

Though I'm hoping this is just a Hoax. http://www.911truth.ch/illuminati_card/Hoax_Illuminati_Card_New_World_Order%20-%20Copy.jpg

I don't have the full deck of cards. I would love for someone with more knowledge, to share with us.

Thank you for publishing these articles, so we can warn our family and friends.

Was it all implied 33 yrs ago? https://www.youtube.com/watch?v=Lc6QXY_E8XE

" A version of London Calling was used as part of the countdown coverage to the 2012 Summer Olympics, to be held in London. There was some commentary, given the song's dystopian lyrics, of its appropriateness.[14] "

" The song was used for a 2012 British Airways advert, picturing a jet aeroplane taxiing through the streets of London passing numerous landmarks and parking outside the Olympic Stadium.[15] "

london calling yeah i was there too
an you know what they said? well some of it was true
london calling at the top of the dial
after all this wont you give me a smile?
london calling
i never felt some much alike

The created disaster on 9-11 successfully destroyed the financial records of Enron, Tyco etc. just before a court case was to inquire into them. Could the projected London disaster do something similar to the City of London with all its financial clout. Not sure how far away the 2 sites are but it could be awfully convenient for the Evil Ones.

[Ex Mi-5 Director] Stella "Cruella" Rimington informed me in 1989 that there was a plan surrounding the number 7 (7/7) and to blow up the Jubilee line. And those were their 2 biggest plots. That was from the horse's mouth, one has already come true, and this was a few decades before the Olympics were 'officially declared' for London.

So either they are planning it, or they wanted me to think they were planning it! But it seems it is the former, one coming true. They probably wouldn't have expected a young man to be listening so carefully as I was!

If true, The Royal Arch have been planning it for over 20 years. Perhaps it's the extension they will blow up, i.e the 'extension' has been deliberately built to be demolished.

Royal Arch KGB will have known about these conversations, probably from multiple sources.

Thanks to Mr. Hossain for assembling the pieces to this puzzle. A
minor correction â€“ Wolff Olins is a company, not a person (Wolff
and Olins are two different people). To my previous comments about logo design, this is a truly "elite" design firm in terms of their connections (like Pentagram in the USA) and any "Illuminati" logos are likely not accidental:

My half baked conspiracy theory is that this logo looks like (and
means) the destruction of Zion. British Israelism is older than
Zionism, and Israel was enabled by the British. The Rik Clay videos point to the idea that these games are about the establishment of (as William Blake wrote) Jerusalem in "England's green and pleasant lands", not about the triumph of Israel. Not to mention they coincide with the Queen's diamond jubilee and a ritually significant year for prince William.

Not sure how this would play out â€“ maybe a false flag in London
justifying an Israeli strike on Iran, followed by the nuclear
annihilation of Israel, followed by 1000 years of handwringing,
special rights for the survivors, and possibly the establishment o f those mysterious world capitals in London, Kazakhstan, Canberra and elsewhere.

Freeman (freemantv.com) has had some interesting predictions about these kinds of issues for a couple years (though I think his involved the Vatican seizing the temple mount in
Jerusalem on July 4). Israel has outlived its usefulness as a
staging area for controlling mid-east oil, and is a PR nightmare. I
think it's got more value to the Illuminati as a ritual sacrifice
at this point, and these Olympics just might usher in the ritual.