Pop Music as a Corrupting Force 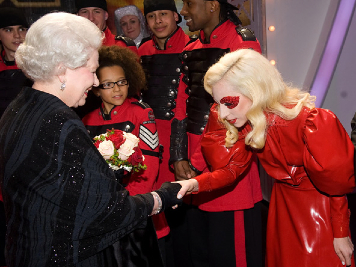 (Left) Lady Gaga is honored by the Queen. The Illuminati uses the entertainment industry (TV, movies, music) to induct society into satanism.

by Peter St. George
(for henrymakow.com)

Everywhere we go we see tiny white buds resting perfectly inside ears blocking out all sounds but pop music. Is this music uplifting or degrading?

I believe it is the Devil's forked tongue. Just consider the lyrics:  "Just dance, it'll be ok"i, "Smack ma bitch up"ii and "Kill that nigga"iii.

Lady Gaga repeats the word "Judas" 37 times in her blasphemous "I'm in love with Judas". Even the Queen is a Gaga fan apparently. Gaga has 70% as many Google results for her name as Jesus.

So far I have managed to avoid listening to this satanism and if it should be played near me I would observe Matthew 5:29 "If your right eye causes you to sin, gouge it out and throw it away. It is better for you to lose one part of your body than for your whole body to be thrown into hell."

But how are satanic themes so widespread and prevalent in modern popular music? Simply put, those who create and manage the music are the high priests of Satan: the Illuminati. If you look at any musician who is selling big and trace their record label upwards you will find a division of Illuminati Inc.

Have you ever wondered why there is no crackdown on illegal music downloads now thought to be over 800 tracks per teenager?iv Well it is because the devil does not charge for his sermons as long as it is more effective!

The Satanists know that "It's not about the money...We don't need your money...We just wanna make the world dance. Forget about the Price Tag"v.

Have you ever wondered why "gangsta' rappers" are duet ing with young women  who admit to "selling their soul to the devil"?  It is because there is no longer a divide between most music of different genres and tastes. The musicians are all owned by the same satanic cult and serve the same wretched master. They do as they are told or else (Michael Jackson et al).

Plato recognized that music could change character and be used to corrupt people. Aristotle too stated that "Some [music] makes men sad and grave, like the so-called Mixolydian, others enfeeble the mind, like the relaxed modes, another, again, produces a moderate and settled temper, which appears to be the peculiar effect of the Dorian; the Phrygian inspires enthusiasm....The same principles apply to rhythms; some have a character of rest, others of motion, and of these latter again, some have a more vulgar, others a nobler movement....music has a power of forming the character, and should therefore be introduced into the education of the young...."vi

However, Aristotle would surely be devastated to hear young girls singing "Don't be a little bitch with your chit chat just show me where your dick's at."ix Or a more subliminal and repeated ad nauseum "Put your hands in the air, like you just don't care"x which is perhaps an instruction to submission i.e. "Put your hands up".

The quality that is valued in popular music has shifted dramatically to being "catchy" rather than beautiful and stirring. This is all part of the satanic plan to ingrain their mind-set into people.  In the current generation, simplicity not complexity is valued. Instead of listening to an orchestra play a note they would rather hear gunshots between verses.

Now this is not to say that all music is bad or music is inherently evil. My point is that it is highly efficient at promoting an agenda or manipulating people. In fact, music and dancing seem intrinsic to human nature as it is present in all societies. African tribes sing and dance through the night.

However, there is a difference - they do it together as a group! They are not self-absorbed, sucking in mindless and harmful lyrics, seeking to subvert them from their natural God-given tendencies with satanic scripture. Instead they rejoice in kinship and God.

Now, it may be said that these "pop stars" have concerts where thousands of people come and "sing-a-long". Yet this too is a lie and a disgrace to music. For the songs lack heart, emotion and righteous meaning. They are sung by mindless drones who will sing whatever sick and twisted words are put into their head, scream approval when told that their favorite artist sold their soul to the devil xi and throw up Illuminati symbolism on command. xiixiii

Compare these numb, swaying and pathetic "hero" worshipers to that of a musical Christian gathering. If you go to any number of churches on a Sunday you will see the true meaning of music. People are regularly brought to tears (including myself) not due to some hollow phrase but at the meaning and love that the lyrics stir up within oneself. This is the true root and purpose of music before it was subverted and the very nature of it which is the nature of all things; God.

He can clearly be found and experienced when someone takes in the meaning of,  "If you pass through raging waters in the sea, you shall not drown. If you walk amid the burning flames, you shall not be harmed. If you stand before the pow'r of hell and death is at your side, know that I am with you through it all."xiv

Peter St.George is the pen name of a 22-year-old Canadian.

Comments for "Pop Music as a Corrupting Force"

A quick comment for the music industry piece. I don't think people should get too fatalistic about satanic control of the music industry. These days that control is mostly illusory, as the means of creating professional music are reasonably cheap and available to people. Instruments, recording devices are affordable and music is passed around on mp3's, which means you don't need to pay publishing costs.

Here is an article by David Byrne (of talking heads fame) talking about how musicians are more free from industry control than they once were. His talks of 6 models that musicians can now follow: http://www.wired.com/entertainment/music/magazine/16-01/ff_byrne?currentPage=all Rather than moaning about satanic control of the music industry (or to compliment that criticism), people can create their own music and positively effect people. Individuals change the world. We have more power than we think.

Henry,great article on the Pop Music industry.I'm a huge extreme metal fan (the stuff that makes Metallica sound like the BeeGees) and people these days have no appreciation for thrash metal's complexity and technicality. It's also EXTREMELY MASCULINE which goes against the whole emasculazation of men program. I also listen to some really good Christian Metal such as Beliver,Living Sacrifice,Vengeance Rising,Seventh Angel, etc. I'm also friends with Scott Waters of Ultimatum, who I have no doubt he's a brother in Christ. Thanks for another great article. Jeremy http://www.ultimatum.net/mainframe.html
http://en.wikipedia.org/wiki/Ultimatum_(band)

Response to Pop Culture as a corrupting force.

The fact that the Rock / Pop industry is a “Tool of the devil” is “A given” and is no longer even a debatable issue, the only question that can now be asked is, “Are you content with that fact ?”

In 1951 when this new music came onto the scene, it was called by different names, boogie woogie, rhythm and blues etc.

However, none of these terms seemed to “Hit the spot” a DJ. named Allan Freed, who worked on a Cleveland Ohio radio station, went down into the ghetto area of Cleveland Ohio and asked them what they called this kind of music.

“Rock and Roll” they replied, “Due to the fact that we commit fornication or adultery to the beat of the music, many times in the back seat of a car, so we rock and roll.”

Allan Freed returned to the radio station used the term and the rest as they say, “Is history.”

Rock and Roll is the primary tool of satanists.

Rock music is viewed at this time as the primary tool of satanists.

Taken from a satanist statement.

Rock has always been the DEVIL`S music, you can’t convince me that it isn’t. I honestly believe everything I’ve said, I believe rock and roll is dangerous.

WHY ARE YOU PLAYING WITCH DOCTOR`S MUSIC ?

It was in the early 1970`s when my sisters arrived in Kalamantan, Barat, Indonesia, where our parents are serving as missionaires with R.E.M.U. International, with them they had brought a contempory Christian record which was the “In thing” in Canada they said.

They were playing the record one evening, when an older national Christian stopped by the door to my sister’s astonishment his immediate question was, “Why are you playing witch doctor’s music, by which they call on Satan ?”

To the national who had left the old heathen practices which included the witch doctor, it was hard to explain why Christian young people in the churches who had sent out the missionary to teach them the way of salvation and separation from the world, could even begin to listen to that kind of music.

I was there when this incident happened and am writing now to verify it.