Book Details How Canada Was Sold Out 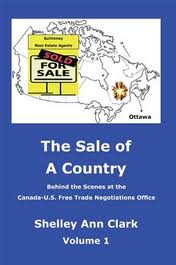 Rather than "governed", Canada is being  trafficked like a kidnapped child. The details of this tale are chilling.


Insider says a secret version of the US-Canada Free Trade Deal was signed.

Shelley Ann Clark reveals how Canada was
sold to the USA in her new book, "The Sale of a Country"

Shelley Ann Clark,  multilingual 30-year veteran of Canada's Dept. of Foreign Affairs found herself in the midst of a scandal that has yet to be openly discussed in Canada.

As a high-level staffer with security clearance during the negotiations for the 1988 Canada-USA Free Trade Agreement*, she watched as our country was sold to the USA, without anyone noticing.

Now she has written an explosive book that proves Canada was placed on a rapid path to full integration with the United States. Those skids were greased by the Free Trade Agreement, which essentially was a gift of Canadian resources to the USA with not a lot in return.

The Americans got the keys to Canada's wealth in much the same way as they bought Manhattan Island from the indigenous natives, for a bunch of beads and blankets worth only a couple of bucks.

Clark recounts how, as the Executive Assistant to Germain Denis, Number Three man on the Canadian FTA negotiating team, she was required to type out two different versions of the agreement's terms, one for the provincial premiers to review, and another with the real terms, that has never since been seen by any Canadian outside of the team that wrote it.

So the premiers never saw the real agreement: they were handed bogus documents with figures altered to make things look hunky-dory to them, while behind the scenes, the Americans were busy approving terms and conditions the premiers would never have agreed to support.

In fact, the original, real document is hidden in a bunker 50 miles north of Ottawa, and all the bogus documents were shredded on command.  The premiers never caught on that they had been had, nor did the Canadian people. And the signed agreement has since been declared an object of "National Security".

Shredded documents, midnight meetings, secret whisperings, computer spying, ransacked homes, threats, covert contacts with the PMO... and a deal that gave away Canada's right to determine what we do with our water resources, that allowed foreign takeover of Canadian companies, that harmonized with the US health care system (Obama-care, anyone?), that altered our banking system, our communication system, and ultimately geared us up for absorption into the USA....


In a perfect world, arrests would be going on as we speak, heads would roll, and enraged Canadians would scream for justice. But, oddly, no matter where Clark went to try to speak truth to power, her words fell on deaf ears.

In fact, the more she spoke out, the more trouble Shelley Ann endured, all for the sole purpose of trying to make Canadians wake up and take back their beloved country.

Even the estimable Maude Barlow and the Council of Canadians, for all their influence, could not make a dent in the wall of silence that covered this agreement.

Nor could lawyers, honest reporters, or a speaking tour of the country and countless interviews by Clark and her gaggle of supporters.

Sick and tired of watching this nation being eroded by its own elected representatives, while Canadians snore in front of their I-stuff , Clark is now moving in a full court press to get the word out: there are two more books to come in this saga, which is worthy of a big-budget Hollywood production, complete with sexual predation, death threats, manipulation and full-on intrigue.

With them will come even more detail, and more evidence, of the scandalous theft of our national sovereignty via "trade" agreements, and how Canada has succumbed to these entanglements, along with far too many other countries.

"The Sale of a Country" is a solid education on how things really run behind closed doors, one that should cause patriot hearts to sink.  But what  continues to shock me, is that damnable wall of silence: the media's complacency and widespread refusal to publish the story, the RCMP's failure to investigate, and most of all the deliberate blindness of Canadians who are currently watching their nation swirl in the bowl along with many other national sovereignties, without regard for the fact that their children, and their children's children, will never enjoy the Canada we once had, for the simple reason that evil is abounding, and good men are doing nothing.

Stephen Harper is rapidly leading us down the same path to the total destruction of this country. Indeed, he has been quoted as saying that when he gets done with this country, we won't recognize it.  And he's well known for the kind of secrecy that is endemic in the story of the Canada-US Free Trade Agreement.  And he will continue, as long as he thinks he can get away with it.

"Those who fail to learn from the past are doomed to repeat it," said a wise man, once.  If Canadians fail again to listen to Shelley Ann Clark, and do not stand up to take back this nation from the criminals and traitors who have unlawfully sold it out from under us, well, you do the math...

* This was the Free Trade Agreement with the USA, not to be confused with NAFTA, which includes Mexico.

In her capacity as Executive Director of the National Health Federation of Canada (www.thenhf.com ), Dee Nicholson was one of the first in the health freedom movement to point to Canada's expanding loss of sovereignty.

Dee can be heard on Zero Point Radio along with Dr. Christopher Holmes, every second Saturday on www.bbsradio.com/ Station ONE.  Listen to Shelley Ann Clark in person, on May 26th from 4-6 pm EDT.

All physical land in Canada is the property of the Crown, Queen Elisabeth II. (And she owns 1/6 of the entire land surface on Earth = 3 times the size of the USA.)

There is no provision in the Canada Act, or in the Constitution Act 1982 which amends it, for any Canadian to own any physical land in Canada.

All that Canadians may hold, in conformity with medieval and feudal law, is "an interest in an estate in land in fee simple".

Land defined as 'Crown land' in Canada, and administered by the Federal Government and the Provinces, is merely land not 'dedicated' or assigned in freehold tenure.

Freehold is tenure, not ownership. Freehold land is 'held' not 'owned'.


Who Owns the World: The Surprising Truth About Every Piece of Land on the Planet

Comments for "Book Details How Canada Was Sold Out"

The article, HOW CANADA WAS SOLD OUT, needs to be supported by some of us hardcore members of the I TOLD YOU SO crowd. No matter how lousy it sounds we were legion, and the news blackouts were not very effective.

I was still steelworking then, in Ohio, and we were joined at the Detroit AND Windsor demonstrations by counterparts from various Canadian outfits, especially aluminum workers from Sudbury. Canadian and US autoworkers were also involved, and about five years later there were enough from our old gang that when the Mexican side agreement came, we printed up teeshirts thats said NAFTA - NOT ANOTHER F__KING TRADE AGREEMENT!

Canadian and American workers both realized AT THE TIME that the CAN-US part of the treaty was only an intro, both were industrial nations. The real ploy here was bringing Mexico in it. After four years of nothing much happening to workers above the Rio Grande, the REAL issue was snuck in.

The Mexican Deal was the money shot because it destroyed all three countries. Check if you like. The bankers celebrated the NAFTA trinity by devaluing the peso and sending millions of Mexicans into poverty, and often also into the USA and Cananda.

But we must keep repeating: This was ALL known before it happened. It was a banker-government co-op, designed precisely to cut the bottom out of what had been a fairly stable North American industrial middle class. Also let's remember that Mexico, on its own hook, was doing far better than it has been since. The idea that ANY of this outsourcing ever benefitted Mexico then, or any lesser developed country since, is bunk.

Keep hitting them Henry. The Bilderburgers are going to be deciding our futures again come Mayday.

Let's get a few things straight.

Canada was never a sovereign country. It has always been controlled by Great Britain, first overtly then covertly. A giant and wealthy plantation state to the "Empire of the City".

Canada's official name (rarely mentioned) is "her majesty's government" as in queen Liz's government. She owns all the land, minerals, water in Canada. We are mere users (serfs) paying rent for the privilege of using her land & resources.

The high level politicians in Ottawa (of all political parties) are members of the Privy Council of Canada.

Privy means private, secret, confidential. The Privy Council are the monarch's henchmen. Even the late NDP leader Jack Layton was a member. So much for right wing / left wing politics.

Canada was not so much sold out as was merged with the USA.

Still would like to read the book "The Sale of a Country". Sounds good.

If Canada was sold it wasn't to "the United States." It was to the owners of the United States. The normal American citizen is already pauperized by his owners and can't buy anything like that.

Shelly made the claim of the two versions of the agreement with Glen Keeley. I immediately faxed the info to ex-premier Mike Harcourt with the info. I never got a reply.