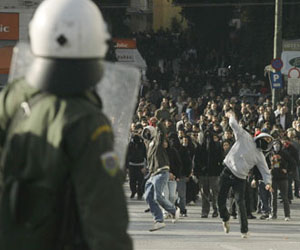 "All men of power here, get their power from plundering the Greek people, or having connections with those that do it."

I am 26 years old and live in Greece. I am writing this letter in order to let you know about a new law in Greece announced yesterday.

The financial minister of Greece announced yesterday that from 1/1/2011 all financial transactions of sums above 1500 euros in cash, will be banned. For any transaction above 1500 euros, only credit cards and checks will be legal. The formal explanation for this law is it will combat those who do not pay taxes. But we all know this is not the case...

It seems the new world order wants to make Greece a testing ground for their new laws. For the past months, Greece have been attacked without mercy. We have been called liars, frauds, cheaters, thieves. They are threatening us constantly with banning from the euro zone and default. [These charges are] not true. ... The problem is, based on their accusations and (the virtual) bad situation of Greek finances, they will pass their experimental laws of their new world order.

The fairly new Government of the socialist party, elected 4 months ago, forgot all its promises, and is determined to pass laws giving citizenship to illegal immigrants after 5 years, without any trade-off. We are 10 million Greeks here, and almost 3 million mostly illegal immigrants, who will obtain Greek nationality and will gain the right to bring their families here too... In Pakistan there are even ads saying "for 5000 euros we get you to Greece, to study free, work, make families, and obtain EU passports"...

And now this... The previous government created a new ID card, to collect data from people since childbirth. This government will ban transactions in cash over 1500 euros, in order to make all of us have credit cards. The obvious first step is to ban all cash transactions, then merge this new ID card with the credit system, then, well.... insert this merged ID card into our bodies...

Our peoples' morale is low, society is disorganized because of immigration and propaganda, and we will not fight those laws. You people living in the Western World, be prepared because they are planning the same for you!

I will try to give you my personal view of the conditions in Greece.

First of all, there is no trust in politicians. Most people distrust them and know they are scum, but continue to vote for the same people in every election. This happens because they promise privileges in order to get votes. Most politicians are members of secret societies, and have close ties to USA and European elites. Our current prime minister is even an American citizen...

A young man living in Greece and having no connections, is hopeless. Without connections, he will have major difficulties if he wants to join a good University(or complete his studies without bribes), if he wants to find a job, or create his own. He will be forced to join the army while privileged young men with connections will illegally avoid it.

And there is no point discussing finding love... Of course pretty women will pick wealthier men, but in Greece even women of moderate appearance prefer men with deep pockets. They prefer sharing the top men than having a man only for themselves.

And the top men in Greece are all frauds. Greece, apart from some natural resources and its tourism industry, produces nothing of value. Corruption is so big, that all productive forces are drowned. So all men of power here, get their power from plundering the Greek people, or having connections with those that do it. Women (and their families) of course are not concerned about that. As long as someone is wealthy, he is desirable, and value as a person is irrelevant.

Despite poor economic condition (but not so desperate as to warrant dire measures), people in power take pleasure in attacking traditional customs, Orthodox Christianity, and traditional Greek patriots. They protect illegal immigrants, and silence their crimes. They attack Christianity, in the media, at schools etc. They are removing all Christian symbols from public places.

Greek media are a pile of garbage. For the biggest part of the day, most major TV networks will show shows discussing greek "vips" lifestyle, sexual relations etc. There are few "political" shows and news shows, all trying to cover the truth and turn the attention of the people at matters of trivial importance. Propaganda is blatant. The previous government was literally destroyed by TV networks. They promoted heavily the current government, so strongly that previous prime minister was forced to make new elections despite being only for 2 years in government.

Current prime minister made promises, NONE of which kept after being elected. Only a few days after election, he went on with the plans of New World Order. He created an artificially dire financial situation, in order to be able to pass whatever laws he wanted, plus giving his friends some money... He "cooked" our budget, by moving payments of 2010 in 2009 and incomes from 2009 to 2010, in order to both make our deficit bigger and be able to claim in 2010 that he "improved" our economy... This doesn't mean that our previous prime minister wasn't a puppet, just that he wasn't able to fulfill New World Order directions like the new government.

Huge economic scandals are discovered every day, and buried by Greek propaganda media. And most honest people are so concerned with working 2 and 3 jobs in order to feed their families, that cannot fight this corruption. Greek people work on average many more hours weekly than other EU countries, get much less pay, and pay more for the same products. And because of the traitors in government, EU newspapers and media call our people lazy. They say we need to work even more and receive even less... Of course this is not true. The plunder of Greek people has been made with their assistance. But this is a long subject and i wont go on with it.

In a few words... Life in Greece sucks. Since I am a computer programmer, i have many times thought about leaving for a better country and make my living there. But i do not want to abandon my home... yet. I would be willing to fight this system, but i see no point since the system is so well entrenched it cannot be tackled by a few men alone.

The reason i wrote you my previous letter is because this new law of banning cash transactions above 1500 euros is just another step towards cashless society, and is being implemented in Greece as a testing phase. I strongly believe it is a matter of time before most western nations see similar laws.

"Greek Crisis is Coming to America"

Henry,
Looks like the information provided to you was absolutely correct.  http://www.reuters.com/article/idUSLDE61824V20100209
HIGHLIGHTS-Greek FinMin unveils tax reform, wage policy
Tue Feb 9, 2010 11:37am EST
Related News
Unions vow strike as Greece finalizes deficit plan
Mon, Feb 8 2010
Greece to levy 40% tax rate on more earners
Mon, Feb 8 2010
WRAPUP 5-EU vows to hold Greece to austerity, markets wilt
Wed, Feb 3 2010
Greece eyes 1 bln eur revenue boost from fuel tax
Wed, Feb 3 2010
ATHENS, Feb 9 (Reuters) - Greece outlined on Tuesday its public sector incomes policy and a tax reform bill, as part of an EU-endorsed plan to increase state revenues and reduce its huge deficit.
Bonds
The following are comments by Greek Finance Minister George Papaconstantinou at a press conference:
IMPACT OF REFORMS
"The total benefit of our incomes policy will be around 800 million euros.
EU
"EU partners and markets will closely monitor the implementation of our fiscal plan, I believe that the response will be positive. The measures that we have announced are becoming action"
TIME FOR CHANGE
"The time has come for major changes, the country can't afford to wait any longer"
TAXATION
"From 1. Jan. 2011, every transaction above 1,500 euros between natural persons and businesses, or between businesses, will not be considered legal if it is done in cash. Transactions will have to be done through debit or credit cards"
"With the new tax scale, there is a shift of the burden from low and middle income to high incomes.
"There's tax relief for incomes up to 40,000 (euros)"
"Taxable income based on the new scales will include capital gains from the short-term trading of stocks"

The situation he describes is the same in Denmark, we have for 5 years now that we are not allowed transactions above 10.000 Danish kroner(1500 Euro) The reason giving in Danmark for this is; to fight terrorism:-)

Christos you are not alone, the situation is the same all over in Europe, The European people are betrayed big time.

What we need is a well organised international "patriot" resistance to fight these fascist traitors.

I know that in many European countries lots of people are aware what is going on but just do not know what to do about this.

We got to unite! that is the only chance we have!