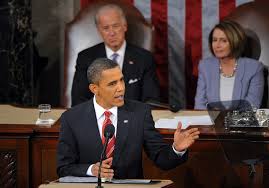 Obama's  State of the Union Address largely focused on redistribution of wealth.
"Let's give America a raise,"  the President from Goldman Sachs said.

This strategy was first enunciated in 1966 by two Marxist sociologists,  Richard Cloward and Francis Piven.  It involves bribing individuals and corporations with fiat money.  This ensures the bankers both gain power and shackles the nation with debt.
https://www.youtube.com/watch?v=NtkBuB1NVoY
Below is a classic essay by Wayne Root, the 2008 Libertarian Vice-Presidential candidate which first appeared here Oct. 26, 2012.
"Barack Hussein Obama and his regime have created a vast and rapidly expanding constituency of voters dependent on big government; a vast privileged class of public employees who work for big government; and a government dedicated to destroying capitalism and installing themselves as socialist rulers by overwhelming the system."

By Wayne Allyn Root
(Las Vegas Review-Journal, June 6,2010)
Barack Hussein Obama is no fool. He is not incompetent. On the contrary, he is brilliant. He knows exactly what he's doing. He is purposely overwhelming the U.S. economy to create systemic failure, economic crisis and social chaos thereby destroying capitalism and our country from within. Barack Hussein Obama was my college classmate.(Columbia University, class of '83)
He is a devout Muslim; do not be fooled. Look at his czars... Anti-business anti-American. As Glenn Beck correctly predicted from day one, Barack Hussein Obama is following the plan of Cloward & Piven, two professors at Columbia University... they outlined a plan to socialize America by overwhelming the system with government spending and entitlement demands.
Add up the clues below. Taken individually they're alarming. Taken as a whole, it is a brilliant, Machiavellian game plan to turn the United States into a Socialist/Marxist state with a permanent majority that desperately needs government for survival... And can be counted on to always vote for even bigger government. Why not? They have no responsibility to pay for it. 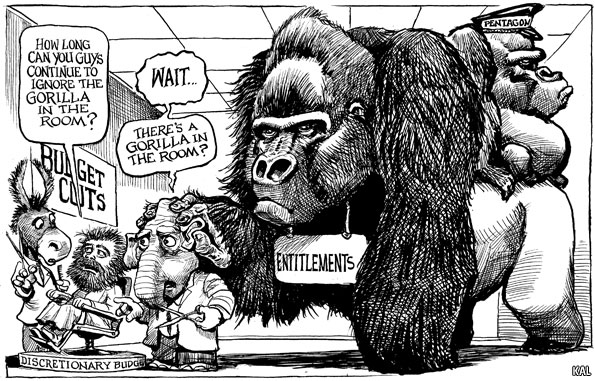 Universal Health Care:
The Health Care bill has very little to do with healthcare. It has everything to do with unionizing millions of hospital and healthcare workers, as well as adding 15,000 to 20,000 new IRS agents (who will join government employee unions). Obama doesnt care that giving free healthcare to 30 million Americans will add trillions to the national debt. What he does care about is that it cements the dependence of those 30 million voters to Democrats and big government. Who but a socialist revolutionary would pass this reckless spending bill in the middle of a depression?
Cap and Trade:
Like healthcare legislation having nothing to do with healthcare, Cap and Trade has nothing to do with global warming. It has everything to do with redistribution of income, government control of the economy and a criminal payoff to Obamas biggest contributors. Those powerful and wealthy unions and contributors (like GE, which owns NBC, MSNBC and CNBC) can then be counted on to support everything Obama wants. They will kick-back hundreds of millions of dollars in contributions to Obama and the Democratic Party to keep them in power. The bonus is that all the new taxes on Americans with bigger cars, bigger homes and businesses helps Obama spread the wealth around. 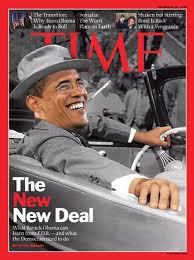 Legalize 12 million illegal Mexican immigrants:
Just giving these 12 million potential new citizens free healthcare alone could overwhelm the system and bankrupt America. But it adds 12 million reliable new Democrat voters who can be counted on to support big government. Add another few trillion dollars in welfare, aid to dependent children, food stamps, free medical, education, tax credits for the poor, and eventually Social Security. (see note above re: Puerto Rico)
Stimulus and bailouts.
Where did all that money go? It went to Democrat contributors, organizations (ACORN), and unions -- including billions of dollars to save or create jobs of government employees across the country. It went to save GM and Chrysler so that their employees could keep paying union dues. It went to AIG so that Goldman Sachs could be bailed out (after giving Obama almost $1 million in contributions). A staggering $125 billion went to teachers (thereby protecting their union dues). 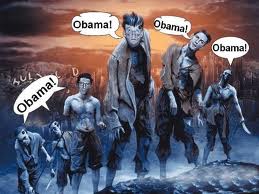 All those public employees will vote loyally Democrat to protect their bloated salaries and pensions that are bankrupting America. The country goes broke, future generations face a bleak future, but Obama, the Democrat Party, government, and the unions grow more powerful.
The ends justify the means. Raise taxes on small business owners, high-income earners, and job creators. Put the entire burden on only the top 20 percent of taxpayers, redistribute the income, punish success, and reward those who did nothing to deserve it (except vote for Obama).
Reagan wanted to dramatically cut taxes in order to starve the government. Barack Obama wants to dramatically raise taxes to starve his political opposition. With the acts outlined above, Barack Hussein Obama and his regime have created a vast and rapidly expanding constituency of voters dependent on big government; a vast privileged class of public employees who work for big government; and a government dedicated to destroying capitalism and installing themselves as socialist rulers by overwhelming the system. 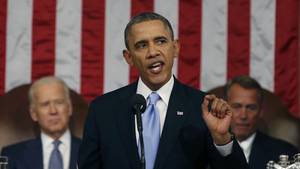 Add it up and you've got the perfect Marxist scheme all devised by my Columbia University college classmate Barack Hussein Obama using the Cloward-Piven Strategy.
Last point: think about what this designed rule of the rabble will do to anyone successful and everyone receiving this is. What will your lives be like under Communism? The time to fight this abomination is now.
I hope each of you will forward to at least a dozen people.

Comments for "State of the Union: Obama's Cloward-Piven Strategy "

This is a timely and precise article.

The US is going bankrupt, and when the bubble blows, it will be like an atomic bomb compared with the firecracker of Greece.
I suggest people read Theodore Dalrymple's books. A physician who worked with the poor in England, he correctly blames socialism for destroying the fabric of British life, with examples, anecdotes and conclusions that are impossible to negate. Obama is doing the same in the States, creating a generation of useless, dysfunctional slaves of the State. The parallels are too many to deny it is a global strategy.

The article states Obama is going to 'legalize 12 million illegals'. Yet the readers at the same time trust Romney is somehow going to send those same 12 million back to their homelands in Mexico, Central, and South America? Both candidates work for the same entity. Either candidate will do as they are told or face a bullet. If ordered, either man will legalize; evict; or even murder the 12 million.

Mr. Root asks: "Where did all (the stimulus and bailout) money go?" Hmmm. It went in the same pockets that George Bush II's stimulus/bailout money went. Somehow when reading writers like Mr. Root, we're supposed to forget who enacted the first bankster bailout. Bush and a Republican Congress, that's who. Again, as there's little to differentiate Bush and Obama, there's precious little difference between Obama and Romney. They are like 2 show windows facing opposite street corners belonging to the same department store. One features clothing that appeals to a conservative buyer. The other window features clothing made in the same SE Asian sweatshop, but that appears a bit more fashionable or modern. Each window offers goods appealing to a different set of customers, yet both are under the same department store roof.

Mr. Root's article is simply a collection of talking points meant to herd those Americans who believe truth is broadcast on Fox News. "What will your lives be like under Communism?" he asks in an effort to inflame the Reagan Conservative. Were Mr. Root an honest man, he'd focus on all the changes since 9/11 that have worked to incorporate a fascist/statist system on all Americans' lives.

Fact is, I'd rather have a true Muslim (or a true Catholic or frankly a real Jew unencumbered by zionism who recognizes the State of Israel is in fact a thumbing of the Jewish nose at the Creator) in the WH than a man or woman who's in bed with the Satanic Illuminati and has no allegiance to God or human life.

Just saw the article posted and unfortunately, it is very inaccurate in a number of regards.

I will just comment ofn the Puerto Rico issue.

Mitt Romney has now also said that he will make P.R. the 51st state.

This is the worst election in my lifetime and I honestly feel that both candidates should be rejected by the American people. Neither are capable of fulfilling the Oath of Office, which states: " I do solemnly swear (or affirm) that I will faithfully execute the Office of President of the United States, and will to the best of my Ability, preserve, protect and defend the Constitution of the United States.".

Root said Obama is a devout Muslim, but actually (aside from his other associations which have been proven) he doesn't fit the criteria of a Muslim, namely the 5 pillars - the 5 prayers, specifically. Also if one is a Muslim it has to be announced to the world. He has to say what his creed is, no hiding. This is part of what Islam requires.

Rather he fits the definition of someone who used to be Muslim but
apostated (is no LONGER Muslim).