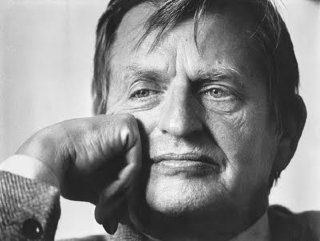 The resemblance between Nazi and Zionist
race ideology was no coincidence.
Seems the former was modelled on the latter.

from Dec 9, 2010
Letter from Sweden from
"K" who has since gone silent


You seem to be right in your assumption that Illuminati Jews were behind Hitler. As you know I have been editing a document in Swedish, put on the net by an anonymous source calling himself George de Culpa.

The 200-page e-book is named "I händerna på en blodsofferkult" ("In the hands of a blood-sacrifice cult"). The author seems to have put together a lot of investigative material on Illuminati Jewish influence in politics, including Nazis occultism.

The big problem with the writings, is that the "George" seems to have some kind of deficiency with language. His sentence structure is very bad and the thing is almost unbearable, but his information is exceptional. I thought the book deserved to be 'translated' into something more readable.  As I live in Sweden, one of the more interesting subjects is Olof Palme [Swedish Prime Minister 1969-1976 and 1982-86]  and his family.

Olof Palme came from a crypto-Jewish family by his mothers side. The original family emigrated out of Germany and to Baltic states (at the time in German Knight hands) in the 13th-century. [My guess is that they probably were Khazar-Jews].

Their name was Knieriem (from workers in leather) and they were a Jewish family 'converted' to Christianity.

Over hundreds of years, they rose to top positions in society. For his contribution to Russia, the first individual in the family is knighted around the time of the Vienna Conference, 1814-15.. His name is Meichior von Knieriem.

At the beginning of 19-century, some of the family move to Moscow under the Russified name Knirim. The author of the book wants to emphasize that this is 100 years before the 'revolution'.

In Moscow, they get prominent positions in the Tzar regime.

- Alexander Alexandrovitj Knirim, born 1837, come to be one of the highest men in the legal apparatus of the Tzar regime.

- Jegor Ivanovitj Knirim, born 1807, come t be professor in Germanic language at the University of Moscow.

- Ivan Fjodorovitj Knirim, who died 1807, was one of the directors of the dreaded Okhrana. [ Olof Palme also started his career in Swedish intelligence].

And now we come to the Nazis:

The father of the mother of Olof Palme, was Professor Woldemar von Knieriem. The author writes that the Jew Woldemar at this time is headmaster at Riga polytechnic school (Latvia).

Pupils at this school later laid the groundwork for the pan-Germanic race-ideology with it's new socialist party. They subscribed to Blavatsky's teaching that race mixture diminished the root-race.

He writes that race ideologue to Hitler, Alfred Rosenberg, a Jew, was educated in this teaching. Another was Max Erwin von Scheubner, saint of the young Nazis.

At the coup d etat 1917, Woldemar v Kniriem,  moves his school to Moscow. The author writes that Rosenberg became educated in the Pan Germanic project, i.e. to break up European culture, as a means of making way for socialism. He further writes, that Rosenberg in Völkisher Berobachter 1927, writes that his aim in life is to unite the Russian youths of Dostoevsky with the national socialistic [youth].

For brevity, I shall just write down a few more details.

The year they meet, their cousin Rajani Palme Dutt, is founding the Communist party of England.

He also plays a major role at the founding of the Indian communist party.

He writes then, that the uncles of Olof Palme, Rajani and Clemens Palme Dutt, ran the Apostles Club at the Cambridge University, the notorious espionage-cell that come to recruit Kim Philby and the other spies.

Another cousin of Olof Palme, was Hella Wuolijoki, one of the founders of the communist party in Finland who was given the key-role in the Finnish capitulation talks with the Soviets.

The brother of Palme's mother, August von Knieriem,  became 1931 a member of the IG Farben Board of Directors and chief legal expert of IG.

IG used slave labour at Auschwitz and built their own concentration camp, Auschwitz III or Monowitz, to handle slave workers for their 'Buna werke', a large production facility to make synthetic rubber and gasoline.

August von Knieriem, was indicted in the Nuremberg court proceedings, but was allegedly saved by pressure from Rockefeller in US.

I find it somewhat questionable how one single family could produce so many individuals working in top positions for communism, and socialism, and possibly having an influence on the future Nazi regime? To me it looks like this family should be researched for more details of hidden history. Below is the link for the original document.

"Palme was born into an upper-class, conservative family in Östermalm, Stockholm, Sweden. ....Despite his upper class background, his political orientation came to be influenced by Social Democratic attitudes. His travels in the Third World, as well as the United States – where he saw deep economic inequality and racial segregation – helped to develop these views."

See the disinformation? The words "social" and "democratic" are still used to evoke the assumption that generational elitists are moved to tears by the sight of the downtrodden masses while viewing them through the windows of limousines. How long can school history books, media and wikipedia print such rubbish with a straight face?

Socialism is the means by which the financial oligarchy can subvert the minds of the populace and control them.

Palme was assassinated in 1986 on a walk home with his from a Stockholm movie theater without a body guard escort. His wife was wounded but not slain. Incredibly the assassin(s) have never been conclusively identified, and no conclusive motive has been established. Two separate 'lone gunmen' were touted as suspects during the next year but charges were never filed. The press called one 'the 33 year old', and an 'extremist', the other was a brain damaged dope addict. The '33 year old' moved to the US where he was murdered in another unsolved mystery.

Why was he killed? The best guess has to do with what he doing that year. Palme was in international news as part of the international opposition to South African apartheid. At that time the South African government was still negotiating the UN embargo by promising reform, when Palme delivered a summit speech calling for nothing less than unilateral abolishment.

In the court brouhaha after his murder, rather like the Warren Commission which snow jobbed the President Kennedy assassination a former South African cop gave testimony of a high level conspiracy involving the South African secret service and Rhodesian special forces.

But apartheid fighter and social justice crusader was Palme's 1980's public image. More recently in the mainstream retrospectives his back room involvement in international weapons running has come to light in connection with the magnifying glass being applied to Saddam Hussein's secret international weapons deals.

It turns out that Palme met with Saddam's minister Muhammad Saeed al-Sahhaf. This information came forth from MI6 during 2003 so what really happened at the meeting may never be known. Supposedly al-Sahhaf said too much about a covert arms deal going on with arms dealer that Palme was involved with regarding selling Swedish artillery to India. Long story short Palme was unexpectedly furious at al-Sahhaf's faux pas. The theory is that when someone in the pipeline heard of this they opted to assassinate Palme before he might expose the deal.

That is amazing -- I never realized the Palme background.

It seems like we're all naive farmers being run by an international conspiracy.

We know now that it is for real. There doesn't seem to be anything new -- just the same old, same old being rediscovered everywhere we go.