A Muslim Convert's Take on US Women & Society 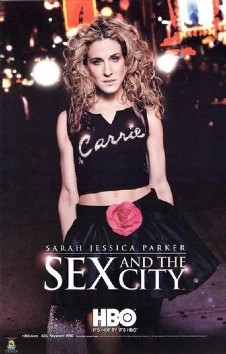 One of my female friends phoned and asked:

"Did you see the new Sex and the City movie? This show is crap. Can't believe they made it into a full length movie. As a female, I resent they make women so stupid and shallow."

Thank God for this friend. Because I work in an office with six women who are:

Career driven women without any emotions and compassion and love and respect.

Stressful women who can be very very angry and hateful

Women who look like women from the outside but there is a beast in them.

Women who are always accusing men of being the reason they are like that --  "you figure!"

Women who are liars and malicious and have nothing to do but to save as much money and try to step on everything you can imagine to keep their jobs.

Should I go on?  I know one thing, these women if they were to get married "I doubt that" they will be A DISASTER!!!! They will be real bad mothers of the west!

I am a proud Muslim covert and I watch TV, movies, listen to my iPod but I know that Allah (God) is aware of everything that I do.  I just use good judgment in how I live my life and how I use those technologies that He has given us all.

However, people totally lose all sight and remembrance of our Creator.

People in western society are oversexed, overworked, overweight, everything is in excess- alcohol, food, sex---EVERYTHING!

More and more people are watching pornography, committing rape and other crimes, cheating on their partners; being promiscuous... should I go on?

Islam really solves all the ills of modern society. We are taught to turn away from immoral actions and gain the pleasure of our Lord Allah. We are forbidden from drinking alcohol, gambling, and sexual intercourse outside of a marriage. We are taught to lower our gaze and not look at the opposite sex. That guidance is a blessing from Allah to heal all the sicknesses of the heart such as lust and depravity.

And as far as Western culture transforming women into objects of sex and lust, walk down the streets in the summertime. Take a look at any one of the fashion magazines; it's obvious that women are extremely objectified and looked at as pieces of meat. They're judged by this society by what they look like, not their personality and intelligence, and that's very sad.

This is why Allah commanded women to follow the guidelines of hijab and to cover their bodies. They were given their dignity and respect because men view them as strong women instead of conquests.

As Muslims, we should not reject any society or any technologies, but embrace them while still staying modest and true to our faith and in remembrance of Allah, the Creator of everything.

P.S.: True Christians and Jews don't even do those things. Unfortunately, we are under attack!

Comments for "A Muslim Convert's Take on US Women & Society"

As a devoutly Orthodox Christian young woman, in essence I agree with what has been written regarding the degradation of women in western society through media and the like. However I am also a high school teacher at a girls school, where the dominant culture is Muslim. I have seen some appalling behaviour by these Muslim girls in every context (both veiled and unveiled): the swearing, arrogance, blatant disregard and disrespect towards authority and elders. And her point about “We are taught to lower our gaze and not look at the opposite sex. That guidance is a blessing from Allah to heal all the sicknesses of the heart such as lust and depravity. “ is not evidenced at my school where the Muslims girls (as well as the other girls, however they are not in question here) flirt, kiss and generally solicit meetings with the boys from the school next door.

To the point where they have been caught in illicit and compromising situations with the boys and serious disciplinary action was needed. My point is, not that Muslim girls/ women are any worse behaved than any other culture. They are susceptible to the same temptations as everyone else.

It’s that the author of this article must be careful in presenting the Muslims as the perfect ‘solution’ or model of ‘perfect religious teaching to the rest of society. Wearing a veil and full covering does not necessarily indicate true spiritual humility and piousness. And just for the record, I too dress modestly and wear a head covering when praying to God in my church, and I fast throughout the year for similar reasons to the Muslims, the only difference is that the whole world doesn’t know about it, only God and I do.

This is in response to the obvious anti-semite Bill [below]: please stop lying to people. The 'footage' you claim showed Muslim women celebrating about 9/11 was in fact later admitted to be stock file footage released by corporate whores in the western Pravda Press in order to demonize Muslims and make them suitable targets for extermination. It appears you will tell any lie that suits the purposes of your Wall Street masters, which is to kill brown-skinned people and steal their resources.

And in this case the brown-skinned targets of your ire happen to be of semitic origin.

Therefore you are an anti-semite and even worse, a self-righteous poseur.You could care less if Muslim women are liberated so long as you get to wave your Chinese-made American flag and thump your chest about how superior you are to poor people halfway around the globe. If anyone needs to grow up, its you sir.

You are the reason I disdain religions. You have taken pride on how precious your body is to a god named "Allah" and how it should be covered
up. Yet women who have taken on the same religious oath of obedience in covering up were witnessed to dancing in the street, shouting joyful praise to your "Allah" as the towers in New York were crumbling down with its'
death toll of the innocent.

You are the same women who don't dare speak up against evils of your religious police who will beat you to keep you in line to their sexiest
madness.

You sound as if you a have some sort of liberation but basically your kind are shackled to a medieval masculine mindset that aren't mature enough in handling the reality of now.
Not only have you submitted yourself obediently in covering your body as some religious ritual but your mind's eye as well in being controlled.

I have to say I truly respect the Muslim distain and revulsion for "the sexualizaton" of children and women in the western world and elsewhere. It's a moral sickness. As a Christian, I have definite disagreements with certain Muslim doctrines and beliefs, particularly their version of the redemptive work of Christ, the crucifixion and the resurrection (which is the very heart of The Gospel Message).

But Muslims are right and righteous in their criticisms of vast promiscuity and immorality that is now rampant in the West (and most of the world also) today. I thought the article made some very valid points. thanks for posting it.

Thanks for the work you are doing...most of the people I know are blind to what is going on
in the world, and when it is brought to their attention they "this would never be allowed to happen in this country". However it is and a small few on my friends see it as well

Christian and Islamic civilization have some fundamental pillars in common, modesty,
matrimony and respect for God. The Catholic Church is being under heavy attack for almost 500 years, now is the turn of the muslims...Why ? Because they are in the path of the New World Order.

Marriage allowed almost every man and woman to procriate and form families. Now, with the divorce and alimony industry and with goverment incentives for single moms, everything payed by the tax payers, the pill, women go after a few powerfull, exciting men, which have harens. Thus, women have illegitimate children, grow them without a father (unless they settle down with a normal men - beta), and so the cycle perpetuates with impunity and applause by feminists. Of course they are angry and with bad mood, everything is wrong ! They cannot even imagine that with their jobs, they are taking a job of a man that will not have conditions to raise a family (but for selfish people, this is just a small detail).

Checking Roissy's blog (Citizen Renegade), "The Futurist", Roger Devlin, etc, etc, etc, at
links I found on this site, I could cross information (politics, conspiracy, social issues, gender, etc), and I agree even more with this bold post and with the author of this site,
THIS IS NOT BY CHANCE, WE ARE UNDER ATTACK, THIS IS SOCIAL ENGINEERING !!! THEY WANT US TO GO BACK TO PRE-CIVILIZATION, US GOYM !!!

All real Christians, Jews, and truthful people should read what this Muslim have to say !!!