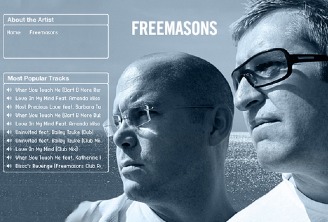 (fifth in a series, "Freemasons in My Life")

My business ventures during Florida's building boom eclipsed the sum of everything I had attempted so far. Experience dealing with the Masons enabled me to engage them in a form of guerrilla warfare.

The strategy consisted of infiltrating their ranks, and gaining their confidence to a point where they were reasonably sure I was one of them. This began to have a "snowball effect" and before long, I found myself getting referrals from within their fraternity.

This dangerous game required tact and total attention. It could be nerve wracking. At the slightest hint of suspicion, I would quickly make myself scarce. Discussions were limited to business sidestepping a "Masonic word game" which could out me.

I was able to provide gainful, lucrative employment to several good men who had no Masonic ties.

As with all good things, my decade in the "Sunshine State" reached its conclusion. Amid the waning economy of "W's" second term, I reviewed my situation, liquidated my real estate investments and moved on to greener pastures before the bubble burst.

The exit strategy included a contract to transplant a production facility to the heart of South Carolina's "Bible Belt" where Freemasons rule supreme.

Knowledge that my destination was about to become a "real estate hot spot" exacerbated my proclivity to jump from the frying pan into the Masonic inferno. While fulfilling my contract, I used every spare moment to research the area's land offerings and it became apparent that development was rapidly approaching. Major road widening and bridge renovations were underway.

My job's completion, I had chosen the ideal tract of land, struck a deal and paid for it with the proceeds of my sales in Florida.

Anticipating immediate ostracism by the Masons, I took several steps to avoid disaster. The first was to apply for my maritime pension to provide a comfortable income without reliance on sources controlled by the Masons. The second was to engage an out-of-state, non-Masonic contractor that I knew and trusted to furnish and erect a building under my direction.

My detractors erroneously assumed I was attempting to establish a repair business. This notion set the stage for my introduction to the "locals" and soon, the initial flow of "customers" approached like an ink cloud concealing the tentacles of a Masonic octopus.

Tasked as inquisitors, members of a local "Blue Lodge" filtered in to glean information about my intentions and conduct a "threat assessment" to local Masonic businesses.

Their faltering, inept attempts at spying were both obvious and laughable. Predictably, the "upper Masonic echelons" had employed their lesser counterparts, sometimes called "Porch Masons", to handle the dirty work.

Meanwhile, the "Masonic elites" gathered in their lair to ascertain how I had commandeered of a key piece of real estate without their blessings and to formulate a plan to disenfranchise me.

So the battle continues. My trusty "For Sale by Owner" sign graces the fence, a colorful ad campaign flows across the web and I patiently await the resurgence of the real estate market.

Meanwhile the neighbors maintain their watch, cataloging visitors to my shop and making regular reports to their Masonic masters. Those found guilty of consorting with me face castigation and are directed to take their trade elsewhere.

This is a Godsend because I am now free to devote my time to development projects for a select clientele while the world of the Freemasons remains outside my gate.

During the course of my life, I have wasted a disproportionate amount of time grappling with the Freemasons.

I strongly encourage skeptics to examine the plethora of information readily available on the web and the multitude of publications on this subject. Relate what you read to your own life experiences. Perhaps in doing so, you will find answers to some of the confounding events that have directly affected your life in business, law and the workplace.

UPCOMING - "WHY I DIDN'T JUST JOIN THE MASONS"

Hereâ€™s my take on the Masonic thing based on nothing more than my anecdotal observations. At the lowest levels Masonry is just as presented; a fraternal group of men doing good deeds and chasing down endless rabbit holes in search of ancient â€˜secretsâ€™. It is, after all, an organization based on â€˜deception by degreesâ€™ and they provide a faÃ§ade of legitimacy for the group. Above them in this hierarchy is the core purpose group that designs â€˜how things get doneâ€™ in any given town. The banker, judge, businessman and lawyer conspire to advance their interests. This explains why somebody gets a loan without the required collateral, another gets a choice piece of property in the path of development and why others are able to unload their â€˜white elephantâ€™ properties on governments or universities for a handsome profit. As explained in earlier comments, they control key positions in the community including sheriff and coroner to protect their brethren in event their misdeed are discovered.

But I suspect even the afore mentioned group is unaware of a much smaller but more powerful group woven in parallel within this hierarchy that constitute the â€˜Illuminatiâ€™ you expose. They are the evil Luciferian cabal that observe and recruit from the core group and I suspect require homosexual initiation to belong.

If you want to know who is a Mason, read the obituaries. They always reveal their affiliation after their death. Masons are encouraged to recruit their â€˜qualifiedâ€™ sons to join and you can suspect who does.

I am so glad to see this article and the comments about what really goes on behind the scenes when in the realm of 'Masons'.

Innocent and/or well-meaning people should certainly be made aware that untoward events that occur in business and employment affairs can be attributed to secret power groups in society.

The masons operate behind the scenes and control a great many events without exposure.

They avoid exposure because it is so dangerous to expose them -- they have power to control local newspapers because they must walk a fine line or they will lose substantial amounts of advertising. Hence, crooks get to thrive for another day.

Crooked businesses are able to see no printed stories about themselves because they can make or break a small local newspaper if they have other crooked businesses working in conjunction with them. Watch for the masonic connection. Watch your local masonic hall's members who sometimes show themselves in newspapers with their aprons. Ontario small town newspapers sometimes print these.

Gossip, though unreliable, is the only way that rotten business practices can be reported in a smaller city or town. Ask around; most towns have signs indicating social clubs like the Lions, etc. and the masonic signs will usually be there (in Ontario).

Larger newspapers don't bother to chase down small-time crooks and their business practices because they operate on another level entirely with their own power groups at odds with each other.

The larger cities have their own masonic groups that are sometimes infiltrated by still other power groups. The Masons are not usually too sophisticated at the junior level and actually believe they are on the up-and-up as a whole.

Believe me, I know.

I liked your informative article " Outwitting Local Freemasons". I also found the long comment about the article rather interesting. I have contemplated for a long time about becoming a fellow initiate but had serious doubts about the Masonic Order's true intentions after reading on the internet and a few books. My grandfather was a mason, a Shriner, a Templar, and a member of another; something of the Sacred Shrine.

He and my grandmother raised me for a few years while my father got his career started. So I hold my grandmother and grandfather in high regard. I always thought that he was a just and fair man. My grandmother was one of the most thoughtful and loving women that I have ever met.

My grandfather never mentioned anything. I got interested through people I work with after some light reading on the Internet.

Regardless to my beliefs I can not entertain the idea of joining a fraternity that bows before anything other thanYAHWEH, or shows favoritism and hatred towards outsiders which is contrary to the holy teachings. I am a 34 year old mixed Caucasian with American Indian, Irish roots. I am not biased.

My husband lost his job as an Electronic Engineer the month after 9/11.He was the only child and son of two devoted masons who were both deceased by 2001.Disinherited after converting to Catholicism, he had limited contact with his parents for over thirty years and they missed much of the joy of being Grandparents. His parents outlived most of their masonic " friends " and so after his father suffered a stroke and was left in the care of his dementia afflicted mother , a Florida Social Worker called my husband to make arrangements for his elderly parents. I am a registered nurse so most of the decisions fell on me. The one goal I had in mind was to keep them together in one facility so neither felt lost. I recalled my mother -in -law as head of the Eastern Star, preferred never to go into a masonic retirement facility, since in her former position of honor she knew personal items of retirees were taken away and auctioned off after the Eastern Star members had first pick. She was able to purchase furs and diamond wedding rings for under a dollar and had proudly displayed them to me shortly after I became her daughter in law.We were able to place them in a beautiful long term facility where they were well cared for and they enjoyed regular visits and outings with us since they were not even aware they had shunned us for decades.
During the last years of their lives we really were educated into masonry. Calls came to our home demanding he contribute to the masons since he had Power of Attorney for his parents finances and that would be ".......what They wanted". We also read the Masonic literature in the form of magazines and newsletters that came to our address, along with the private books in my father in laws possessions.

Later, my fifty year old husband pondered the layoff selection in his department of his former employer. It appeared that patents attributed to him and high evaluations played no role in the termination process. His coworkers had ' held on' for months after he was let go.They seemed to have friends that were able to give them contacts for new employment. In reflection, he remembered the group of four or five in his department,who seemingly did not even like each other at work ,often went on long weekend retreats together in a group. He recalled apparent code phrases and handshakes that puzzled him at the time, but he chose not to inquire since he always focused on his job. The financial perks to belonging to a Lodge are magnified in a dire economy. However, when you have reached the end of your life it is family and not the Lodge that comes to the rescue.