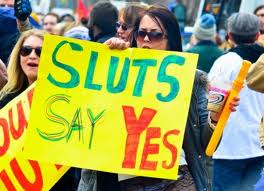 ON FEMINISM
What sort of male - female relationship is it when competition, not cooperation is the order of things?
April 21, 2008
by Philip Jones
(henrymakow.com)
Where Feminism is concerned, I am scathing, in my absolute condemnation of this unnatural socially engineered piece of deception.
Speaking candidly, I have had the whole `Femi` thing up to neck height and onwards. This cancer in our societies has been growing unchecked for the greater part of my fifty years on this planet.
It has insinuated itself into the lives of us all, riddled every institution with it's poison, polluted all the avenues of information. It affects even the most `traditional` and conservative of women now, to a greater or lesser degree, due to the incessant and relentless propaganda campaign waged against society via the mass media, and what laughingly passes nowadays as an education system.
As I have stated previously, it has in so many ways blighted my life, and obstructed my ability to interact normally with women. Now before the `Evil Host of Harpies` jump in here. I have, in spite of Feminism, always been successful and confident with the `Fairer` sex.
I like women, real women, and am not one of those men who fears rejection by them, or feels intimidated around them, no matter how attractive or clever they may or not be. Quite the contrary in fact.
Yet still, the question remains; What sort of male - female relationship is it when competition, not cooperation is the order of things. It is that peculiar dysfunction called Feminism which these days stunts men's ability to interact healthily with women, and in turn convinces women that men are not the Alpha to their Omega, but instead opposites and adversaries.
I am angry and disgusted by the whole false and degraded ideology, and by those who propagate it so freely, without appreciating what it is they are doing. Even worse, those who understand exactly what it is they are indoctrinating into people, and what it's inevitable catastrophic consequences will be.
All across the West, families are falling apart, populations are declining due to a below replacement level of reproduction, suicide levels amongst our youth have reached record levels, anti depressants have become the `State's` expert stock answer to juvenile problems created by it's own insistence on a way of life so far removed now from anything resembling our natural state of being. These are all directly or indirectly related to the feminist ascendancy in societies.
In the words of Katarina Runske, " Feminism is a Darwinian Blind Alley. Nothing identifies a maladaptive social pattern so quickly as a below replacement level of reproduction. Nations pursue feminist policies at their peril ".
FEMBOTS
A very good friend of mine who happens to find himself cast adrift and single, after his marriage went the way of so many others, is having a horrendous time of it. Every woman he meets appears to be a carbon copy of the previous. The same masculine dress sense, complete with the `trouser` uniform of choice, same haircut, same confrontational attitude, same argumentative `femi` rhetoric, and most come with similar psychological problems born out of living the feminist lie.
Conflict, confrontation and dysfunction are what many of these sad `creatures` have in common, along with a trail of broken homes, fatherless children and former husbands crying out for justice from a system so totally soaked in the ideology of Freidan and co. and so completely weighted in favour of `women`, that they rage in vain against a bureaucratic monolith  whose `army of managers` are almost entirely made up of those very same clone like `creatures` who caused their problem in the first place.
I now find that when I write or speak about this matter, I become increasingly less diplomatic, and more inclined towards the diatribe. I am angry now, yes, and I have every right to be so, as do all men who wish to live a normal life, with a wife to love and be loved in return, and children to continue their line. In fact, I am raging against this alternative reality I find myself in. It seems that with every new day, another blow is struck on behalf of the feminists, and against God's natural order. How far we have strayed from his path. How perverse and corrupted our `civilisation` has become.
Feminism is a lie, it is against universal truth, and it more than any other factor has perverted and corrupted Western man's social functionality. It's time men stopped apologizing for being what they are, stopped retreating from the battlefield, and took up the fight. The best form of defense is always attack. To use a football analogy; `We're at the two minute warning, with no time out's left, and it's time our offense took the field`.