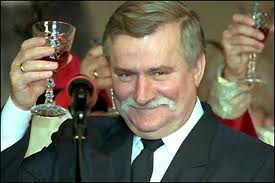 Left, Lech Walesa, solidarity leader was a Communist agent who helped move Poland from Communism to a NWO puppet by leading the false opposition.  President of Poland (1990-1995), Nobel Prize winner (1983) and a New World Orderly to the end, he has attacked capitalism and come out in support of Occupy Wall Street.


If we all agree that the "Cold War", along with Communism, were just a creation of bankers, then we must ask ourselves how they morphed  this into the current "War on Terror".  Poland played a very interesting role in this.

How did our conspirators make a "smooth" transition from Cold War to Terror War? First, they needed to "collapse" Communism. Preferably Communism should die of natural causes, from a simple inability to survive economically on its own.

As we all know from the news, it was the Polish workers movement of SOLIDARITY that started the whole process. To explain better what it really was I must tell you a story of two brothers.

"The best way to control the opposition is to lead it ourselves."
Vladimir Ilyich Lenin

The older brother Stefan Michnik joined the Stalinist forces immediately after Communism arrived in Poland. He wanted to become a judge, so he became a judge....without a degree from any law school!

Under Stalin it was absolutely irrelevant to have legal knowledge when you sentence people to death and that is exactly what Stefan Michnik did best.

He even liked participating in executions! If he was doing this a few years earlier, in a German uniform, his name would be synonymous with that of a monster.

He would be hunted down, tried, and executed for his crimes. If he was caught before the Nuremberg trials, he surely would end up sitting together with Göring and others.

So what happened to him? Since 1968 he lives happily in Sweden.  The public outrage forced the Polish court to issue the arrest warrant (August 2007) and to request his extradition from Sweden. On November 18th, 2010 Swedish court rejected Polish request on bases of time limitation.
.
Yes, time limitation for a war criminal!

If you want to murder people for pleasure, to become a monster of global proportions, and never have to pay for what you have done - you must join the Illuminati conspiracy. 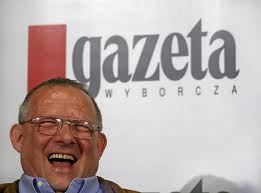 The younger brother Adam Michnik was a driving force of the SOLIDARITY movement. Even today he is considered the "gray eminence" of Polish establishment.

In case you wonder who is taking care of the "information control" for Poland: Adam Michnik is the founder and the editor-in-chief of the largest newspaper in Poland: Gazeta Wyborcza (Notes #3 and #10).

Sorry, I almost forgot to mention his father Ozjasz Szechter! Mr. Szechter was a very active Communist before WWII in Poland. In 1934 he was tried and imprisoned for a conspiracy to overthrow the Polish government.

It was a Communist movement, clearly an extension of the Soviet NKVD, trying to take control of the country and to join the Soviet Union (Note #7).

Getting back to the SOLIDARITY "revolution" in Poland. The first food riots took place in 1970. It was a genuine movement so it was crushed by the army.  Many people died, especially in Gdansk.

The conspirators perhaps realized in that moment that such an anticommunist uprising, when not violent and properly controlled, could be the perfect cover for the transition into new system.

Later the labor union called SOLIDARITY (SOLIDARNOSC in Polish) was created. Conspirators cast one of their informants Lech Walesa in the role of the leader. He was genetically Polish, looked Polish and was primitive enough to play the role of "one of the folks", therefore he easily became a very popular leader (Note #1 below).

The truth is only a small percentage of us humans have the characteristics of a fighter and stand up to defend ourselves. The majority are just "sheeple".

The conspirators know this and use it to their advantage. They cultivate in our minds the illusion of opposites. Since "nobody questions good news" - we remain happy, docile, and stupid.

Just before the transition, the conspirators needed to clean their puppet movement of undesirables. The perfect member of SOLIDARITY should be "sheeple" - perhaps vocal but surely unable to act independently (without any directive from above).

Conspirators were especially concerned (understandably) with the members who were willing (and able) to take matters into their own hands. How to eliminate them? The Communist government of General Piotr Jaruzelski announced Martial Law.

The Army flooded Polish streets with troops and tanks. For the normal average Pole this moment appeared as the "end of dreams" (the sheeple majority) or "call to arms" (the active type). 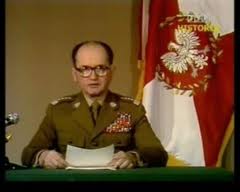 Jaruzelski arrested all the Solidarity leaders and put them in detention facilities (read: hotels). This made them excused from any action on the street and kept them SAFE.

Many places in Poland exploded with strikes and fighting. The Army attacked with brutal force killing most of the active types. The objective was accomplished - the grass-roots level of Solidarity was finally "cleansed" and 100% controllable.

Now the conspirators only needed to continue elimination of some unwanted individuals from the higher ranks of Polish society. Materials regarding these atrocities are not available in English.

The transition went in accordance with plans - lots of "Blah, blah, blah" and no violence. Nobody from the Communist side was hurt, arrested or in any way suffered.

Actually, many became rich. If you look deeply into the past of the Eastern European financial elite you will find only high rank party members, agents of secret services, and military officers.

When Soviets took over Czar's Russia during the October Revolution, one could say about poor Russian citizens: "Slaves remained slaves, only the ownership changed".

This time the owners remained the same. When the transition was successfully finished the time came to make the "sheeple" forget and forgive the previous regime.

All cases regarding Communist atrocities were re-opened (supposedly to "serve justice" this time) but nothing came of it. The horrible case of Stefan Michnik brought some progress only...to be blocked by the Swedish branch of the conspirators.

Adam Michnik with his propaganda arm Gazeta Wyborcza started a campaign to cleanse the image of General Jaruzelski and everybody else guilty of murdering Polish patriots.

Polish secret services, so experienced with torturing and murdering own citizens, did not lose employment. Now the same criminals in the same facilities torture innocent people in the name of the "War on Terror"

Who is guilty of allowing this to happen? I am and you are - we, the normal people, are responsible for this and we all pay one way or another. There is so much wisdom in the following quote:

Lech Walesa was a Communist spy. In a new book, two Polish historians publish what they say is proof that Solidarity hero Lech Walesa collaborated with the Communist-era secret police -- and tried to cover it up decades later. The accusations have set off a new storm over Poland's past.

Yet the authors of "The Secret Police and Lech Walesa," both of whom work as historians at the government-affiliated Institute for National Remembrance, or IPN, say they have uncovered compelling new evidence that Walesa collaborated with Communist officials under the code name "Bolek."

Comments for "How Communism Morphed into NWO - Poland's Role"

I`ve known Walesa personally and I have to admit that his education and intellectual level are rather low.

During his presidency many jokes circulated in Poland regarding how and what he had said in public.

Regarding his role as a communist agent I have to admit that it was very common during the times of the communist rule in Poland that the Polish secret police (UB) contacted many people who showed signs of leadership asking them for cooperation.

That always meant being an informant. Cooperating with the Polish secret police gave people some advantages so many actually signed up. What exactly Mr. Walesa was doing, I have no idea, although personally I think that is being accused of much worse doings than he actually did.

I personally think that his motives when he led the Solidarity movement were honest.

What always surprises me is that almost everyone in the USA who writes about Poland is not sufficiently knowledgeable particularly regarding the state of affairs between Poland and the neighboring countries; Russia and Germany in particular.

I'm 100% convinced that the Solidarity movement wasn't coordinated with the Soviets and that they were very concerned about it.

At this beginning of 1981 economic situation in Poland was very difficult. Most of the stores were empty and when products arrived they were instantaneously bought by the people waiting in long lineups. Many people could not cope with it and wanted to emigrate from Poland at least temporarily.

In June of 1981 my wife started insisting of doing the same; just getting out from Poland. I went to a good friend of mine who worked in newly established special secret military unit and asked him for advice. He told me the following: the Russians indeed wanted to intervene militarily in Poland last year that is in September of 1980 and the Polish government managed to persuade the Russians not to do it.

The Russians consented to the request of the Polish Communist Party only under the condition that they would solve the matter by themselves meanwhile coordinating everything with them. The Polish government was given more or less one year to quash the whole Solidarity movement. My friend told me bluntly: it is your decision to emigrate from Poland, good luck, but remember you have time only until the end of this year.

I'm personally convinced that General Jaruzelski didn't have any other option at that time other than comply with the demands of the Russians.

I wish to tell you that most of Polish communists were also Polish patriots and considering the fate of Hungary and Czechoslovakia they just didn't want to bring similar calamity to Poland.

Regarding lack of trials in Poland of the communist authorities for committed atrocities I have only one comment: except Romania there were neither retributions nor revenge against former communist officials in other ex-communist countries in Europe.

On a finishing note, I have to confess that the whole collapse of communism in Eastern Europe and the Soviet Union is something very suspicious to me indeed and only the history will be able to judge it.

On the other hand, the threat to invade only gave Solidarity credibility.

I was living in LA when the Poles 'threw out' the communists. I was reading the business section of the LA Times. It was reported that the Gdansk Shipyards were being sold to the Rothchilds. How's that for playing all sides!