Is Greek Crisis Part of a Larger Plot? 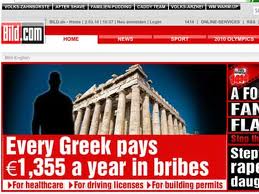 Were Greece's uncontrolled public spending and corruption part of a larger plot to take down the world economy and allow insiders to buy everything on the cheap ?


Corruption in Greek politics and the public sector -- costing Greece billions of Euros each year -- has not been recognized as a major factor in the crisis.

The daily media in Europe has mostly talked about Greek corruption in general terms, like "the whole country is corrupt, nothing happens there without bribes", but they haven't gone into proper detail.

Why? Because the Greek crisis is an orchestrated event.

The Greek case, when understood, blows the whole western political theater apart. It shows that the media and the political "top echelon" are offering people 'false reality' about the recent western economic crisis. The truth is that our corruption is being tolerated to deliberately sabotage the economy for Illuminati gain.

In May 2011, a former Greek MP Georgios Sourlas told a parliamentary committee that chemically adulterated maritime fuel is sold as diesel fuel to Greek armed forces (..who then supply fuel to at least some local police and fire departments). This sulfur rich adulterated maritime fuel is also sold as heating oil to peoples' homes and as diesel for cars at local gas stations.

He estimated that just the tax evasion related to the case costs the Greek state 2-3 billion euros annually.

Greek premier Kostas Karamanlis, Evangelos Venizelos (defense minister at the time) and the head of armed forces all advised to take it further. He then went to Greek Public Prosecutor and the head of the Supreme Court, who stonewalled him. [1]

Georgios Sourlas said he has been interviewed many times by the Greek media over the years about this matter, but that none of it ever aired.

If what Sourlas says is true, it shows that the top echelon of Greek government is involved in this multi-billion euro crime. And what is backing Sourlas' testimony is that few years ago, EU funded countermeasures that have not been enforced.

This costs Greece billions of euros every year. In 2010 Robert Dougall, a former exec from a Johnson & Johnson (J&J) owned company DePuy Int was found guilty of bribing Greek workers between the years 2002 -2005. [3]

The UK court document gives an example how DePuy then charged the Greek state double the European average, (4 x the European low) for one their products. SEC documents show that J&J was already aware of these DePuy dealings in 1990's, but did not stop it. [4]

The UK court document states that DePuy/J&J wasn't the only company handing out bribes. (Other US companies have also been investigated, and one at least, Smith & Nephew has admitted bribing public workers in Europe.)

A Greek investigative TV-journalist reported how, at the time, the Greek state  paid 40 euros for a 7 euro dialysis machine filter. Finally,  the then health minister was able to lower the price to 25 euros, still over 3 times the filter's true value. [5]

Greek health insurance fund IKA was made to pay 2-3 times the prices that it's British, Italian and French counterparts paid for the same materials. [6]

Some doctors falsified documents to scam money from insurance funds. Some ran private clinics with supplies paid by the state, and so on..


In  2011, Greek Parliamentary Investigation Committee(GPIC) concluded that the damages caused by Siemens AG's  "bribes for contracts"-type dealings amounted to atleast to 2 billion euros. Siemens, of course, denied these allegations.

The investigation seemed mainly to cover Siemens-dealings in Greece over the last two decades, but Siemens has had strong presence in Greece since the late 1940's. Siemens has also been a "subcontractor" in other well known corruption scandals (Athens metro-scandal, Greek U-boat scandal), but the company was not under any criminal investigation at the time. ..So, the Siemens scandal might still even grow.

Though Siemens denied the GPIC allegations, the company has admitted 1.3 billion euros worth of dubious payments (worldwide) between the years 1999-2006 [7], and agreed to pay 1.6 billion dollar fines in 2008. Siemens has been under investigation in many countries. [8]

The "punch line" of this case might be coming soon. Instead the 2 billion euros Greece was seeking at first, it has been reported (by AFP and others) that Siemens might be able to settle the case with a petty 250 million euros, or even less.

Greek U-boat scandal and more to look into

The Greek U-boat scandal, a.k.a. the "Ferrostaal scandal" is very revealing. The bribes allegedly reached over 200 million euros, according to documents seen by the Greek news paper Kathimerini, and that the former Greek premier's brother , Nikos Papandreou helped as a "consultant"  in the dealings.

But the interesting part is the fraud involved in the "offset deals" tied to the submarine contracts. These offset deals apparently are the usual way of hiding the true costs of the actual deal itself, in this case U-boats, and so are used to conceal the possible illegal dealings. [9]

Similarly huge fraud may be found when you start to look into Greek public construction contracts and arms procurement. There are also cases in which bonds/derivatives were sold in inflated prices to Greek institutions. The bank loans taken by Greek gov might also be worth to take a look at.


Corruption Part of a Large Plot?

When the corruption in Greek politics has been so vast for so long, it makes you wonder:


Is the ridiculous Greek social benefit system, state owned companies with multi-billion debts ( OTE and OSE ) and the over blown public sector, part of a scam to plunge Greece into massive debt?

Were these actually tools to eventually bankrupt the country and affect the whole Euro-zone and beyond?

When this global cabal (a.k.a illuminati)  wreck the whole western economy, the debt ridden states will have start selling their tax payer owned assets to raise more revenue.

..And then they, the "insiders", start to buy it all dirt cheap, like Warren "the Fukushima tsunami created a great business opportunity" Buffet just did. He just bought cheap European stocks for 1.4 billion euros.

In the spring of 2011, Greece announced that it will try to raise 50 billion euros through a privatization program .... first they wreck the economy, then they put everything of value on sale.

This is what "New World Order" is ..Most the world's (real) wealth will be under a new order.

And what is even more (yes ..there's even more to all this), some people have started to wonder what the euro-zone crisis will do to Wall Street, which is all ready under strain because of the earlier US housing bubble fraud, as we all know.

..and if the western banking sector starts REALLY going down, what do you think will happen to home loans and the cost of everyday living?

The "Greek case" really shows the corruption in politics and the international role in covering this up. And it shows that the media is with the "elites" (..simply, because they own the media), and not with the people, nor with the truth.

Look into corruption in Italy, US and other crisis countries to see that a greek scenario may be in our future.

Start by watching the award winning documentary about the US housing bubble/derivates scam, 'Inside Job' by Charles Ferguson Here:
http://watchdocumentary.tv/inside-job-documentary/#p

Comments for "Is Greek Crisis Part of a Larger Plot? "

Banks have acted the same way for two hundred years. They provide generous loans to governments, including a tempting commission for the politicians who approve them. The politicians just pocket it in an account in Switzerland and " roll the debt", letting the bomb explode on the lap of future generations. They make no provisions to pay the principal, just spend everything in high salaries for lazy public servants, pharaonic works and corruption.

They used to do it with the help of the IMF, as in the case of Brazil and Argentina, and now directly, as with Ireland, Iceland and Greece. It is the same game described in the book "Economic Hitman" decades ago.

Banks would never have the power they do if they had to make money providing credit for people to buy refrigerators. Public debt, the capacity of governments to borrow in your name and tax you to death, is the main weapon of the banks who rule the world today. Every economic problem is secondary to this one.