Rich's Crusade to Save Women 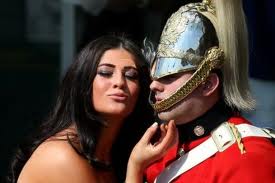 "Women today are SO incredibly naive and entitled that they just go through life thinking that they can completely follow their feelings, hormones and/or "their heart" and that it's ALL supposed to be about them."

(Editor's Note: I'd like to know if this description of women rings true to you. [email protected])

I have been on various sites for over a decade teaching women to shed their delusions about dating, men and the differences between men and women.

Many have shockingly woken up once it was all broken down to them in childlike 1+1=2 terms, where I help them connect the dots.

Women today are SO incredibly naive and entitled that they just go through life thinking that they can completely follow their feelings, hormones and/or "their heart" and that it's ALL supposed to be about them.

They try and turn their BF's into their GF's which is something I tell them NOT to do. Men are NOT with you to get changed, made over or improved.

Women today are SOOO insecure and want to feel SO needed that they PURPOSELY pick the most screwed up and "needy" man they can find so they can try and mother him, nurture him and "make him over".

Of course these women go through their lives WASTING their youthful hot looks when they should be using that time to find a man of true character and potential.

But that would be LOGICAL. Women are almost totally logic impaired to say the least. Because women are adrenaline junkies, they seek out that asshole, jerk, bad boy who gives them that element of danger and fun, fun, fun, because NOTHING is worse to a woman than being bored.

So after wasting 15-20 years Using their bodies to land the man with the most money who also happens to be the most attractive, most of which is done so they can make their gf's, INSANE with jealousy, and after all those bad boy jerks have cheated on them with their hot best friends, mentally, emotionally and physically abused them...now that she's in her 30's and their timer is ticking..

NOW she wishes she could go back and find one of those really nice nerdy but "boring" guys that said he was in love with her when she was 18, 20 or 23; but now they're no where to be found.

So that's when many women come online and start complaining about how they can't find a "good man" today. BULL! They had PLENTY of good men after them when they were younger.

But because women have a WARPED SENSE of life and the insane idea that they're supposed to waste their hot looks and bodies whoring around and having "fun" for the first 35 years of their lives, they neglected to find ....a man with CHARACTER, which women today could CARE LESS ABOUT.

Women don't even FACTOR a man's character into the equation because again. Such men are usually dull and boring as women view it.

No wonder most men have little to no respect for their intellect, consider them dumber than bricks and see them as  a different species altogether or less than human.

Because coming from someone who has tried to talk common sense into them for nearly 20 years, only about 10% have ever really gotten it at ALL!.

Most just go around in circles (which is how women think, in circles) with their same ridiculous, closed-mind asinine arguments never getting anywhere. Talking to most of them is like trying to teach physics to a wall.. it just does not penetrate, register or click at ALL.

Comments for "Rich's Crusade to Save Women "

I tend to agree with what Rich is saying. I've known my share of females who behave as he outlines, though I myself am not in that category. Bad boys and egomaniac jerks never did it for me. But so many females are screwed up and do go after the jerks. I think the reason for that is a combination of factors. Low self esteem, Daddy issues, and the message being given to females by the media over many decades.

Especially teens and women's magazines, where the obsessive focus is always on "how to get and keep a guy." As well as how to perform like a sex goddess in bed. The subconscious message being - always be desperately chasing after guys, do anything to keep them once you get one, and turn yourself into a whore to accomplish that.

Keep in mind too that many women's seemingly illogical need to chase around after the bad boys probably has primitive roots. If that many women behave in that kind of way then it's for a reason. It means something. Bad boys are typically alpha. Evolutionarily speaking, women are wired to go after the guy who's going to be the strongest and most capable, the one who's going to dominate and be able to take care of her and provide strong, viable offspring like himself.

Only problem is, our modern society has ruined everybody, including men, turning many men into abusive, cheating jerks, but women's primitively rooted desires for the alpha are still there, which means......they're subconsciously still seeking an alpha, but so many of the alphas have been ruined by our modern (illuminati controlled) society.

You can't fault women for seeking the alpha. Fault our society for destroying the men. (and women.) Men today have an increasingly narrow role in society, no longer wanted and needed the way they used to be, and there's often times no outlet for their natural male energy in this oppressive Nanny State culture we live in.

They're being completely short circuited you could say, and then corrupted by society and the media on top of it. The end result is a messed up alpha, instead of a positively channeled alpha. But there the poor women are, guided by primitive instincts to desperately seek that alpha male who's going to protect her and the offspring, but often times her only choices now are corrupted alphas.

Here is an honest female perspective. Rich, where were you when I was young and dumb? Rich is completely accurate in his assessment of the horrific condition we are in.

Fortunately for me, the man I was supposed to marry when i was young and could not walk down a street without causing an accident, was available when I finally got my proverbial head out of my proverbial behind. But how I wish I would have not wasted a decade with mr. wrong.

Thankfully, no children were harmed in my situation. However, the man I finally married went through a bitter divorce involving two children whom I treated as if they were my own. In fact, the youngest at two years old thought he "came from my tummy". My situation worked only because I realized my foolishness and asked God for direction.

When you truly seek Him, there is no amount of miracles He can't do. He kept me youthful and kept the desire in a wonderful and forgiving man's heart just for me.

Let's step back and consider the FATHERS of these women. My experience is that fathers fear it is effeminate to deal with even their own children. They pass off responsibility to their wives, giving them inappropriate power and responsibility, and spoil them in order to make up for the energy drain. Their daughters therefore have skewed expectations in their own marriages and parenting. So which came first, the chicken or the egg?

Most women would find the articles on this site to be fairly
offensive, I however find them amusing and pretty much agree that there is seemingly not much hope for 'helping' those women. I know I am a part of that small 10% that is "real". I don't wear make-up, perfume, heels, or any of that crap. I've never had an abortion, never been a 'player'. I am feminine to the core, and yet completely heterosexual. I have an awesome husband, I wasn't looking for wealth or status-lifting so yes, we're poor, but we're happy.

We were friends for years before we finally got together, it helps to be friends, that's for sure.

I would like to point out that the majority of men who are into team sports like football, baseball, etc are just as vacant and blind as the women you criticize. In addition, the sports world is a huge venue for these elitist types activities mentioned here, just look at the owners of most of the professional teams.

The women I know and associate with are all committed activists who honor freedom and who are NOT separatists or of the belief that they are superior to men. They understand the compliment of nature of male and female in all camps. They are not afraid to be feminine and are also not afraid to be strong, in both opinions and actions.

They have a spiritual backbone, keeping them integrity-driven and focused on outcomes to benefit humanity. And come to think of it, the men I know are this way, too. And a strong man is still the biggest turn-on in the universe. :))) The largest thing we're all up against (except for Fukushima, war, tyranny, etc. :() is the system's tearing down of coupling with commitment, of marriage, and family-building. The state can't stand for such; it wants ALL our attention and loyalty and is threatened by strong individuals forming strong families and communities: we might just rely on ourselves for our well-being and therefore render the state a lesser significance causing its profits to diminish, as well as its control.

Now we can't have that, can we? So men must be castrated and women (to coin a word) superficialized. They would have as a parodies of human beings. And yeah, it's selling, but not to everybody.

I just finish reading the article that was just published on your website. I have to say, it certainly holds water!

It's been a couple years since I have been on date, and in a way it is kind of disappointing. I was raised by a single-parent, my mother, who raised me to be respectful and courteous, especially towards women. However, going though high school and college, I have noticed a lot what has been stated in the article; women tend to be the most "programmed" of the sexes from what I've seen.

Naively enough I tried pursuing these go-getters, but with little or no success. It is almost like they have a buffer zone around them. Even while studying at a University, I thought I will be more successful with women than back in high school. I was even more surprised! Most the them only wanted to date guys that were part of their Fraternity/Sorority group, or date the ones that appeal to their own outwardly presentation. Very little individuality.

Of course, me being a part of the whole "Truther" movement, it seems now I am even more on the fringe. Women seem to only care about carnal or superficial things. Even the more "intelligent" of women seem not to care what is going on the world. From my perspective, it seems that men are filling both the maternal and paternal roles of society. Even my mother has lamented to me that women are generally stupid, (I am sadly in agreement with her.)

I know that I will one day find a great companion who will respect me for being me and I for her. So, I again would like to thank you for confirming what I have been observing for a long time now.