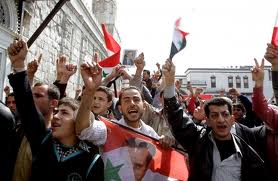 Just as we saw in Libya, the terrorists are once again labeled as "opposition forces" by western media and defending yourself against a terrorist is considered a violation of "human rights."


Since the destabilization of Syria began roughly nine months ago, western media coverage has emphasized only the "peaceful"
protests against President Bashar al-Assad, and those who have fallen victim of his regime.

The sources of these assertions are either anonymous or tied to US and British money. There has been very little mention of the violence being carried out by opposition forces like the Free Syrian Army in Syria. Pro-Assad demonstrations have also been ignored. [1]

In November, Abdulhakim Belhadj, the former leader of the Libyan Islamic Fighting Group who helped overthrow Muammar Gaddafi, met in Turkey with Free Syrian Army leaders to send Libyan fighters to train troops. The new Libyan authorities had previously offered money and weapons to the growing insurgency against Bashar al-Assad. [2]

The Libyan Islamic Fighting Group (LIFG) were trained and armed by NATO. They are linked to al-Qaeda which operates under the CIA. There is no doubt that false flag attacks are used against the Syrian people. Outrages are being committed and then blamed on Assad.  Assad states that Islamist militants from abroad are the source of unrest and have killed 2,000 of his men. [3]

In fact, The Washington Post has revealed, "the 'Free Syrian Army' (FSA) has swelled in size in recent weeks, encouraging defections by ambushing patrols, shooting commanders, and then convincing the soldiers to switch sides. While their numbers are not known, they are led by Colonel Riyad al-Asad, a former Colonel in the Syrian Air Force who defected in June. Since then, the army has increasingly employed guerrilla-style tactics to fight government forces, carrying out hit-and-run attacks or planting bombs on buses." [4]

This fits all the characteristics of Western special operations and is terrorism by any definition. Aiding these terrorists is an act of war. Just as we saw in Libya, the terrorists are once again labeled as opposition forces by western media and defending yourself against a terrorist is considered a violation of human rights.

Recently, The Arab League has sent a small team of observers to Syria to check whether President Bashar al-Assad is keeping his promise to end his crackdown on this uprising against his rule. Critics have already noted that  the violence has only increased since their arrival.

Considering the blatant psy-op that is already in motion, the observer mission appears to serve the ulterior motive of:

2) Eventually monitoring a buffer zone allowing larger shipments of weapons and ammunition into areas under rebel control. The shipments of course would come in the form of "humanitarian aid" as we saw in Libya.

Having the Arab league monitor a buffer zone had previously been suggested by the terrorists. [5]

The main opposition groups have signed a pact in which they "reject any military intervention that harms the sovereignty or stability of the country, though Arab intervention is not considered foreign."

So violating the sovereignty of Syria appears to be okay as long as it results from Arab intervention which has already been backed by the west. [3]

Furthermore, the idea that the Arab League could somehow offer an unbiased assessment of Assad's regime is a joke.

The organization has a track record of  condemning any country that refuses to outsource its sovereignty to foreign interests. Its members have been carefully vetted in advance. This of course is essential to establishing a (globalist) corporate dictatorship. As of right now, Syria is an impediment.

I totally disagree with Branden's defense of the Syrian regime and about describing the victimized people of Syria as terrorists. The Syrian Baathist is an absolute criminal and totalitarian regime and is currently engaged in major massacres of its own people.

It's time for this regime to be removed and changed along with many other Arabic regimes. The only problem is the fact that the Rothschild and their proxies are involved and are taking advantage of the situation. The majority of the people of all Muslim countries who have lived for so long under dictatorships are fed up and have for so long been looking for a way out and the Rothschild's proxies are definitely taking advantage of the situation to exploit those countries and have them under their total control.

This is clearly visible but unfortunately the oppressed people of the Muslim world are caught between two choices. One is bad and the other one is far worse. The question is which of the two is the worse one. To be governed by an iron-fist criminal regime or to accept the change by shaking hands with the devil?
If one's faith is strong, the devil is very weak. I would rather deal with the devil than with hard-core criminals. With strong faith , we can always defeat the devil!

All those dictatorships were installed by the Rothschild and their proxies to begin with and yes they are being overthrown by them now for different reasons but I honestly think that if the Muslims of the world can wake up from their slumber, they can surely change this pathetic situation of our planet which is being corrupted from within and from without.

You see, Muslims are against interest-bearing financial transactions and are against drugs, gambling, prostitution, alcohol consumption, corruption, injustice, oppression, and all forms of evil and you wonder why the devil and his followers are against Muslims? Just think about this, If the Muslims are really bad as every media outlet want everyone to believe, then the Rothschild and his proxies would love them and make them look good instead. The world is far more profitable for the Rothschild and his proxies without the Muslims.

If you hate evil, you must wake up and join the Muslims of the world against the real devils who are dressed as Angels, who own and control every bank, every brain-washing media outlet, every drug dealing house, every gambling facility, every weapon manufacturing company, every corrupt politician, and just about every evil you can think of under the sky. Wake up people of the world before it's too late. Heck, maybe it's already too late and you are totally brain-washed, totally blind and unable to tell the difference between what is good and what is evil.

I guess you haven't noticed that the people of Libya and Egypt are worse off than they were before the CIA-rab Spring began in those countries.

Yesterday evening I watched FRANCE 24 in English which showed a "debate" on Syria.

Obviously the people invited were sticking to the same message, interestingly the most vociferous message came from a representative of HUMAN RIGHTS WATCH, her name was Anna Nistat a snake type of character spitting lies after lies.

Then I went into the interned to see who finances HUMAN RIGHTS WATCH and a long list of donors and "philanthropists" came out, is interesting if you follow the money how many things you discover and how many well known names come to the surface, some of the "philanthropists" are people and foundations such as: 24 Dorothy and Lewis Cullman The Aaron Diamond Foundation Irene Diamond The Ford Foundation The Lillian Hellman and Dashiell Hammett Fund Estate of Anne Johnson The J. M. Kaplan Fund The Fanny and Leo Koerner Charitable Trust The John D. and Catherine T. MacArthur Foundation The John Merck Fund The Joyce Mertz-Gilmore Foundation Novib, The Dutch Organization for Development Corporation,The Overbrook Foundation Oxfam Donald PelsThe Ruben and Elisabeth Rausing Trust ,The Rockefeller Foundation;Marion and Herbert Sandler, The Sandler Family Supporting Foundation ,Susan and George SorosShelby White and Leon Levy.The Arca Foundation